On the Roda di Vael

“Are we going up that mountain”?  Marie pointed to the huge camel hump – shaped rock face in front of us. 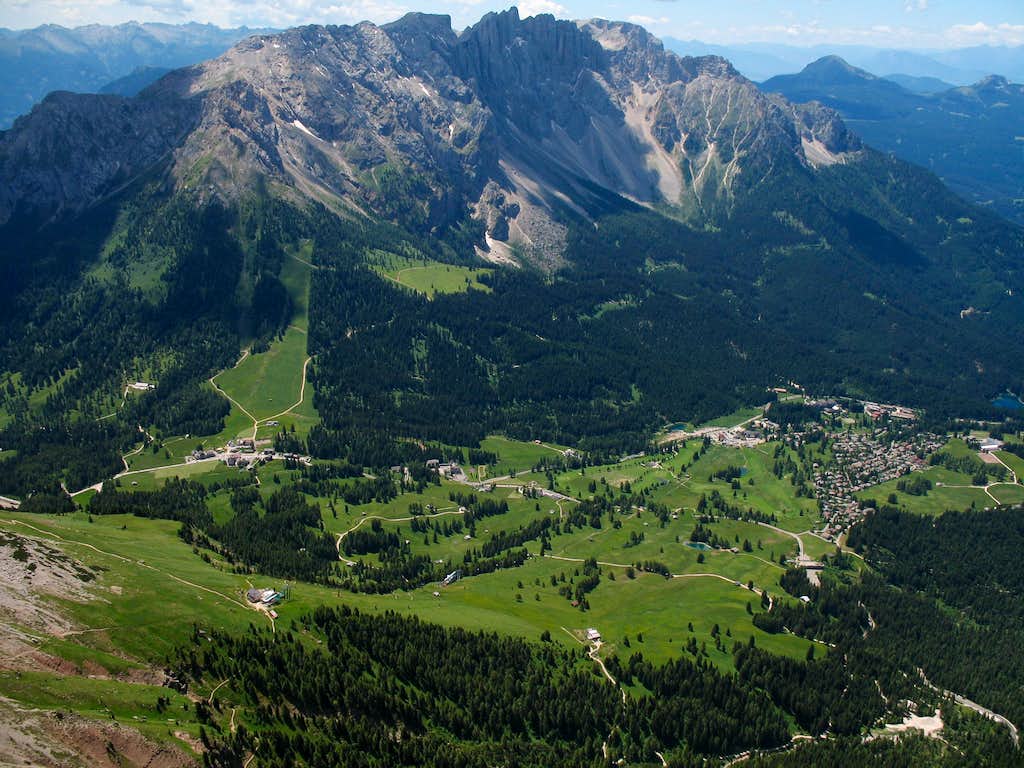 “No, that’s not it” I replied quickly.

We were sitting side by side on the chairlift travelling from the Alpenrose Hotel up to the Rifugio Paolina.

It was a fine, sunny morning in early July. We had caught an early bus from Campitello, down the valley to Pera to change buses for the Bolzano bus

which took us over the Costalunga pass and on to the Alpenrose stop.

Now, we were drifting quietly upwards, over the heads of the golfers just below us.

As I looked up I started to doubt my earlier statement. If that wasn’t our route…where was it?

I couldn’t get the map out for fear of dropping it off the chairlift so had to wait until the top to check, sure enough I was wrong!

“Actually, you were right the first time”, I had to admit.

This was our first visit so far down the Val de Fassa and I was surprised that the small ridge we had come to climb was actually quite a large mountain.

Setting off, we were in a caravan of walkers heading northwards along an easy going belvedere pass (no 552). Passing beneath the Punta Masare and the Roda da Vael, both of which have ferratas on them.

Our English language guidebook had advised us to head eastwards from Paolina to the Rifugio Roda da Vael and traverse the Masare route first, then on to the Roda da Vael (mainly) as a descent. We had chosen an alternative day and headed north.

Most walkers were continuing towards the Rifugio Fronza, so we left them when we turned upwards onto paths no 6 then 549, and finally headed up towards the Passo Vaiolon.

As we headed upwards, the path became rougher and up ahead I could see a group of people had stopped. When we reached them we found they were waiting at the bottom of a cabled section, apparently the start of the route. This didn’t fit the route

description we had but everyone was putting their Ferrata gear on and setting off clipped into the cable. We did likewise and continued up the gully.

The route went diagonally up a face and on to a ladder then around a corner. Once there, the cable finished and we were back to walking and scrambling up the loose gully path to get to the top of the pass.

Once there, we found the true start to the Ferrata. The route follows the broken crest of the North ridge of the Roda da Vael from the Passo Vaiolon. The route is well protected but not difficult and I felt we could have scrambled up it without the cables.

There are some steeper parts but most of it follows an easier angle and there are no exposed parts. It starts on the east side of the ridge before gaining the crest and towards the summit, moves on to the west side. 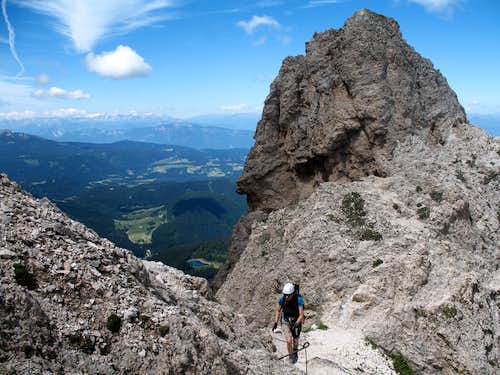 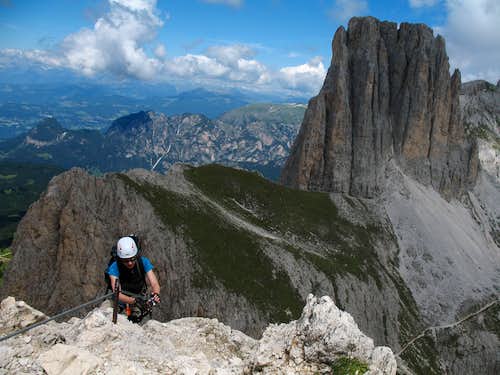 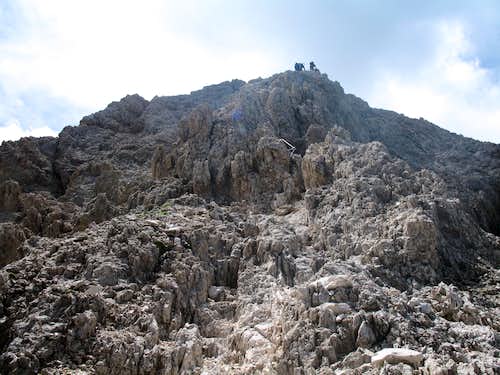 Roda di Vael: Looking up at the broken crest of the ridge

We were quite lucky as it was a fine day and there were many people on the route but a slow couple behind us were holding everyone up.The people in front were quite a way ahead so we had most of the route to ourselves.

The exceptions to this were when we passed a man with his young daughter who let us overtake them and later a mother and daughter who were descending the route.

This was the only couple we met who were descending this way.

Around us were fantastic views of the Catinaccio,especially the Antermoia and the nearby peak of La Sforcella. 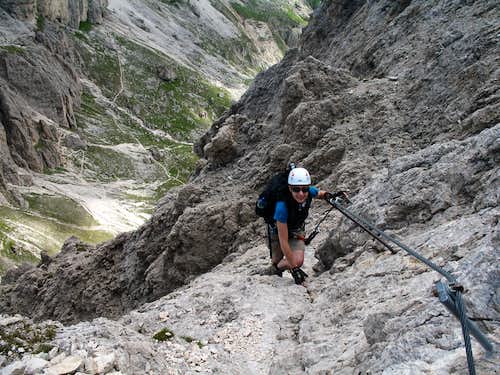 Roda di Vael: On the ridge

“We must be near the top”, Marie commented as we scrambledup a small gully.

2 minutes later we were there.

There were quite a few people on the top, sitting in the sunshine and we decided to join them and have a bite to eat.

From here we could see down towards our chairlift at Paolina and out to Latemar beyond. Eastwards, you get a fine fore-shortened view of the Sella massif (on a clear day) and of

the towns in the valley. Further southwards, the spiky tops of the Pale di San Martino mountains.

After a while, we decided to move off. Everyone seemed to be descending the south ridge towards Masare so we followed that route rather than descend the way we had come up. 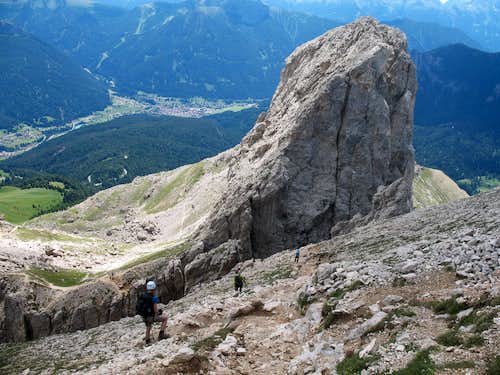 The ridge descends easily at first, then more steeply down a heavily eroded path.

Ahead, there a good views of people on the Masare ferrata and as our path descended, the route steepened and cables appeared to protect our descent over rocky outcrops.

“What are those people down there doing?” Marie asked pointing ahead and down towards the gully in front of us.

I had been vaguely aware of movement on the rock ahead without really taking it in. They seemed to be traversing across an improbable line on the rock face. Now I watched them

and looked at the way ahead and realised that their route was our route too!

The route descends to the Sforcela da le Rode and a broken gully.

From here the ferrata traverses diagonally across and up a steep wall. The route is well protected again with “stemples” for your feet and a cable all the way. It ascends to a buttress

and traverses around it to a short chimney. It was this that we had seen from above.

We set out on the traverse and for the first time in the day I was aware of the exposure, even though we were only climbing about 10m above the broken gully.

Again, it wasn’t that technically difficult but the steepness and exposure made it feel different to the rest of the route. For anyone climbing a ferrata for the first time, this is

probably the hardest part of the route.

A group of three behind us, climbing without ferrata gear, started the traverse but after a bit of contemplation and a short discussion,returned to the Sforcela da le Rode to find an

After ascending the short chimney we were on easier ground. Signposts point the way down to the Rifugio Roda di Vael with only a few ladders and cable sections along the way.

Down at the rifugio, it’s possible to return to Paolina around the southern end of the Punta Masare but we decided as it was still early, to walk eastwards to Ciampedie on the scenic

Viel de le Feide path although, this turned out to be a longer walk than we had realised.

The cable car took us down to Vigo di Fassa for the bus back to Campitello. 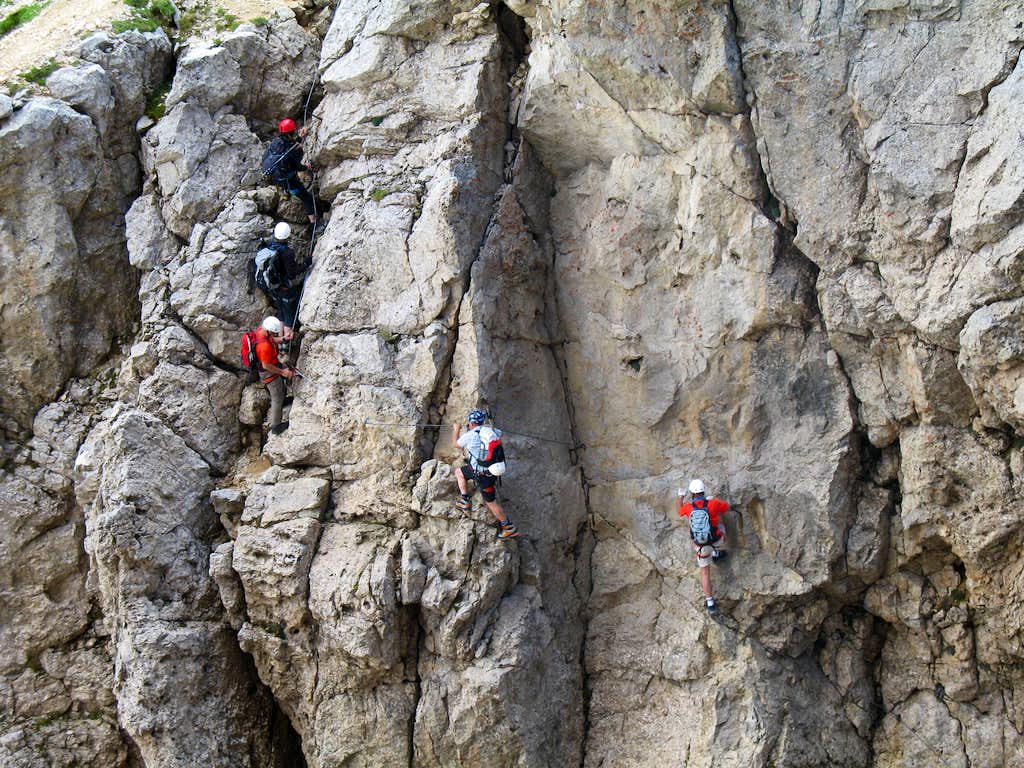 Roda di Vael: The airy traverse out of the Sforcela da le Rode 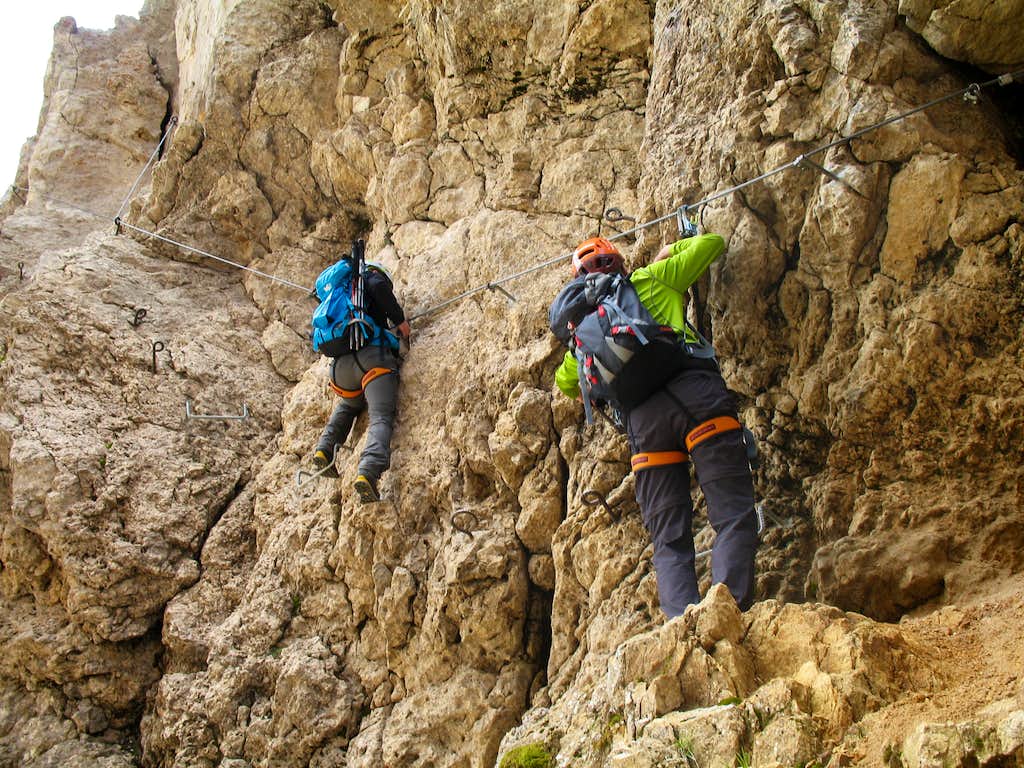 Back in Campitello, we sat in the Cafe Tyrol enjoying the sunshine with a beer and "Bayern toast". 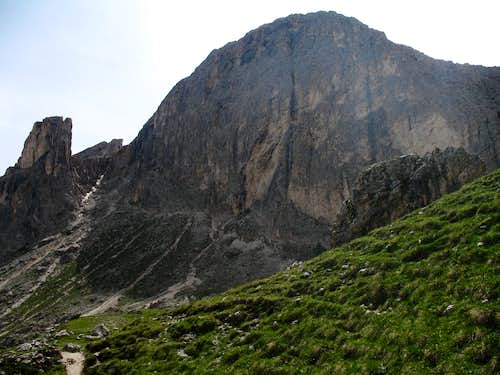 On reflection, I think the best route is to ascend the North ridge as we did and save the Masare for another time.

Whilst we ascended to the Passo Vaiolon via Paolina, it's possible to tackle it from the East although, that would be a longer route.

This is a good route as an introduction to ferrata's, it's not too difficult but has enough for anyone to think about. Great views and a short thrill near the end.

All in all, an enjoyable day.

Thanks for your comment. Yes, it was a good day. The Italian ferrata routes are great for photography.