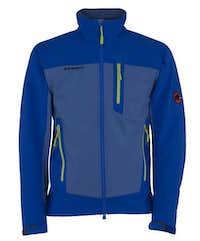 Designed for a multitude of winter activities, Mammut's Plano SOFtech jacket is made of breathable, windproof SOFtech soft shell fabric in a streamlined, four-way stretch design that transitions easily for trips in town.

By Mammut of Switzerland - Made in China

Great SOFtech revision to Alto! Mammut fixes fit but not comfort!
The Plano is a much needed revision to the older Alto jacket that used the same weaving of SOFtech fabric. I'm not a fan of SOFtech for outdoors pursuits since it is not breathable, heavy, quick-to-get-dirty, and has a canvas burlap stiffness to it. For casual around town I find that these SOFtech jackets are uncomfortable since they are not windstopper proof and you will get cold on chilly windy 35 F-and below days. The tight armpits and slim cut makes layering difficult unless you have a rock star thin body.
Wear the Plano in anything warmer and sunnier than 50 F degrees the thing becomes an two ton oven on your back.

Also the price of Mammut's SOFtech is greater than the price of other better fitting and more wind and weather protective technical jackets from other brands. Mammut wants $199 and up for the Plano when even Mammut's own Ultimate Pro or Ultimate Hoody Jackets are a much more superior piece for about the same price. This is like Mercedes Benz selling their economy A Class hatchback mini car for the same price as the S63 AMG Sports Saloon.

It makes no sense to me especially when the Plano/Alto jackets are not well tailored and are not technical jackets like everything else Mammut makes. Beyond looking good when you try them on in the store the Plano/Alto certainly did not feel good for me.

The main negative is the lack of sleeve articulation so the stiff SOFtech fabric bunches up around your torso when moving your arms about.
That said, the Plano does try to improves on the fit over the Alto by making the sleeves a reasonable length and girth relative to the torso. Mammut also made the cuff cinch system much better than the crappy plastic ones the Alto had. However the neck protection on the Plano jacket is not better than the Alto so getting a European Hooded version Plano(Which is an update from the Mammut Heron Hoody-which coincidentally was the hooded companion to the Alto) is the way to go there.

The pockets are narrow and tight fitting and the Plano has no pit zip ventilation although the pockets are now high enough (relative to the Alto's) to help out with torso ventilation.
I tried my jacket out for a day before returning it. It looks much better than the Alto when worn but with the much better Mammut Ultimate Pro Jacket in my closet the Mammut Plano would NEVER get worn by me.

Funny Note: Mammut puts a belay zipper on this jacket although the sleeves are not articulated. So climbers won't rush to pay $200+ for the Plano that they can't use comfortably. So the people that would buy and like the Plano (casual trekkers and city folk) would never need to use the belay zipper other than maybe ventilation around a backpack hip belt. Either way I don't get it.

BOTTOM LINE: If the retail price was at $80 to $120 then I would gladly recommend the Plano for a someone looking for a casual stylish Mammut Jacket. The positives are Mammut does provide plenty of modern wearable colors all of which I love in the Plano to attract a wide range of buyers. However that recommendation I just made was a hypothetical on ONLY based on the price of the Plano being in the sub $100 range. However in reality, serious outdoors-folk and climbers would already know on their own to spend $200 elsewhere. For everyone else at the $200+ retail price the Plano touts I can NOT in my right mind and sound conscious recommend the Plano to anyone willing to spend that much on a soft shell. They are literally scores of much better, better priced jackets out there that would put the Plano and Mammut's entire marketing department to shame!