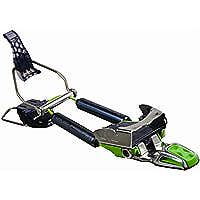 Free the Heel , Free the Mind!

Free the Heel, Free the Mind! That is the mantra that drives the modern telemark craze. This ideal created an engineering nightmare, how can we attatch the boot to the ski in a way that is light, powerful, and durable? Such a quandry has seen several prominent manufacturing companies completely reinvent the telemark binding wheel several times over.

If you think about it there is a tremendous amount of torque and pressure applied to the ski via a relatively small appliance. This became especially apparent with the invention of the Scarpa Terminator boot. Instead of having a soft/pliable leather boot driving the ski, we now had rigid plastic applying extra torque to the ski. This created new demands of the binding that were very difficult to accomodate. One prominent manufacturer even added releasability into this mix!

The weakest leg in the telemark milking stool has always been,[and still is]the binding. The earliest 3 pin bindings were so limited in performance that control of the ski was a sometime thing. In an effort to keep the telemark binding light, aluminum toe pieces were the standard, and purists eschewed the extra weight of a cable/spring assembly that would hold the heel more rigidly. Early spring over cable bindings required you to carry a complete kit in your pack, with enough tools and parts to completely overhaul both left and right bindings. Many a backcountry tour was spoiled by the breaking of at least one tele binding. Modern advancements have strengthened the binding to where it is no longer such a liability.

Most bindings now have a stainless steel toe piece that is stamped into shape to accept the duck bill of a tele boot. The boot is then secured to the toe piece via a lever and a spring loaded cable system that clamps over the heel of the boot. There are some very clever designs that put the springs under the foot, or along side the sole of the boot, and a couple that put the tensioners in front of the toe piece. There is one prominent manufacturer that is still adding releasibility of the boot into their bindings.

Along with the performance advancements in modern telemark bindings, comes an increased price tag, with many bindings topping the $200.00 level, and some even going for $300.00! Many manufacturers seem willing to forgo light weight to improve performance, thus further blurring the advantage of telemark over randonee for backcountry prominence. There is basically no weight advantage to a modern telemark package of skis, boots, and bindings, and if the truth be known, the Dynafit boot/binding combo for randonee is actually lighter than modern telemark boot/binding combinations. You really have to love the telemark turn to justify the weight and cost of modern tele gear.

There are many accessories for tele bindings that include ski crampons, climbing risers, shim plates [to increase leverage], release plate adapters, ski brakes and leashes, and a myriad of spare cable/spring sets for almost all of the models of bindings, just in case these modern marvels ever break.

The major players in telemark binding design and manufacture are;

Black Diamond Equipment. Makers of the "O" series of bindings.

G3. Targas and all that jazz.

Voile Releasables! And they still make a 3 pin!

Rotafella. Look for the biggest innovations from these guys and Scarpa boots.

Rather than including pictures and descriptions of each manufacturers many models, just click on the links and get the beta straight from the horses mouth [so to speak].

There are probably other makers of tele bindings out there, if you put down a review, I will try to include the company in this category page.

May all your turns be deep, and your bindings never fail.