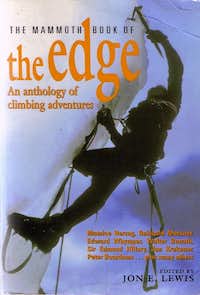 Mammoth series of books include some ubiqous titles like
"The Mammoth Book of Historical Whodunnits" or "The Mammoth Book of Lesbian Erotica". However, Mammoth book of the edge is fine selection of climbing and mountaineering accounts taken 1st hand by the authors.
In respective order, as published in the book, here is what we can read:

Ladder down the Sky is account on the 1953. US expedition to K2, extracted from K2: The Savage Mountain by Robert Bates and Charles Houston

Mirror,Mirror is account of 20-days long first ascent of the Arch Wall on the Trollrygen north face by Ed Drummond, reprinted from Ascent written by same author

King of the Equator is rather sinister account by British adventurer Sebastian Snow of his 1953. climbing experience on Cotopaxi and Chimborazo, reprinted from book Explorers and Travellers Tales

Thin Air is account of first ascent of Gasherbrum IV via NW ridge by two Australians, extracted from Thin Air: Encounters in the Himalayas by Greg Child

Annapurna, Mon Amour is an extract from Annapurna by Maurice Herzog, describing the events from summiting till the storm disaster

The Climb is account on winter climb of the Walker spur of the Grandes Jorasses by Rene Desmaison. Moving stuff. Extracted from Desmaisons Total Alpinism

Above and Beyond is account of Reinhold Messner solo climb over the Nanga Parbat west face.

The Loneliest Place on Earth is Hermann Buhls account of his 1953. ascent of Nanga Parbat

The Gods Giveth, the Gods Taketh Away is extracted from Summits and Secrets by Kurt Diemberger, describing dissapearance of Hermann Buhl on Chogolisa

The Hard Way is account of 1st ascent of Mt. Everest SW face by Doug Scott and Dougal Haston

Attack on Kangchenjunga is account of 1930. international assault on Kanch, written by Frank Smythe

The Ridge is account of the Everest traverse by Hornbein and Unsoeld, extracted from Hornbeins Everest: the West Ridge

The Upper Tower is account of the first ascent of Changabang west wall, written by Peter Boardman

White Spider is classic account of the 1st successful climb of the Eiger north face, written by Heinrich Harrer

Mischabel is account of 1906. ascent of Taschhorn via SW face, written by Geoffrey Winthrop Young

Holiday book
This is kind of book that you would take on non-mountaineering or non-climbing holiday. Choice of extracts and reprints looks fine, but the order as they appear in the book seems messy a bit. Pity they were not given in the chronological order. Also book suffers from the typo errors. Note for those who love photos, there are none in the book. Actually, the only photo or illustration is the one on the book cover. On the other hand, this book may be a convinient present to be given to someone who never heard of any mountaineering writings apart from the Into Thin Air and likes.
It is always good to have in one place classical stories, some of them originally written in other language rather then English.

Here, another opinion on the same book: http://www.mountaineering-scotland.org.uk/nl/book48.html