Palisades of the Desert 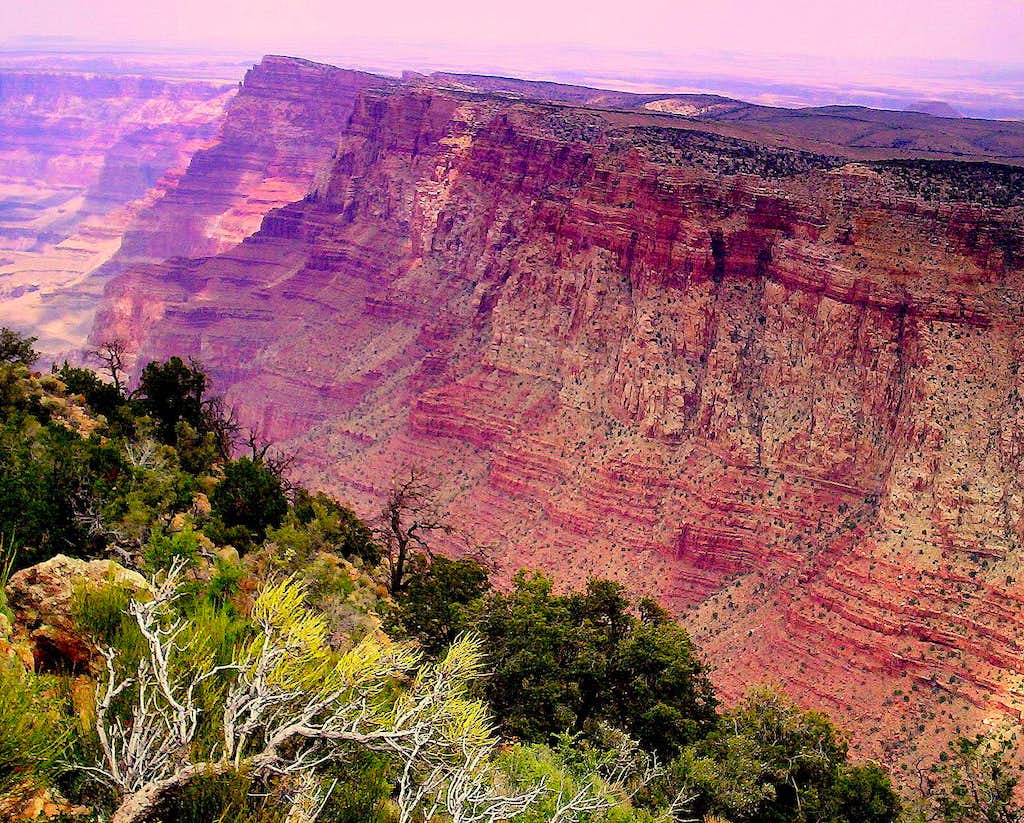 The rim at Desert View offers spectacular views of the northeast end of the Grand Canyon. To the northeast, you'll see the cliffs (shown here) called Palisades of the Desert, which form the southeastern wall of Grand Canyon proper. Follow these cliffs north to a significant rock outcropping, and you'll see 7,073' Comanche Point. Beyond Comanche Point, you can barely see the gorge carved by the Little Colorado River. In 1956, where the gorge intersects the Canyon, two planes collided and crashed, killing 128 people. Most of the debris was removed from the area where the rivers unite, but a few plane parts, including a wheel, remain. The Comanche Point Trail, beginning at the GCNP East Entrance Station, is a FAVORITE of rock climbers, as Comanche Point Pinnicle and Lost Arrow Spire of the Grand Canyon are found on and below Comanche Point. June 11, 2009
« PREV NEXT »

Palisades of the Desert

Cool photo Larry. I did a backpacking trip down the Tanner Trail in April below the Palisades of the Desert. It wasn't crowded at all with only a few other people on the trail.

Re: Palisades of the Desert

The Tanner Trail (descent) is considered to be
one of the steepest rim descents in the Canyon.

I worked at the Canyon for 9-1/2 months, and
I still didn't see it all, for crying out
loud!

I love the place. I'd like to go down the Tanner Trail, camp and day trip down to the confluence.

Re: Lovin the GC

Most believe (today) that Tanner Canyon is
where Garcia Lopez de Cardenas became
the FIRST European to encounter the Grand
Canyon, in his search for the Seven Cities of
Gold.

The view alone is worth its weight in gold!!!

...awesome Larry - So beautiful! The contrast between the pink rocks and the green vegetation is amazing!
~Christina

Why, thank you Christina!

Lolli got mad at me. Can you please tell her
(in Swedish) that I'm very sorry, and that I
hope she has fun in California?

Where are you now? Are you still doing some
"exchange school" work? Take care & thanks ..

ps: (I just got a new camera, so the next time you visit my photos, you might be
surprised at what you see).

Hahaha Sure I'll tell her ;)

I am in Sweden, 2 more days... On Wednesday morning I am flying to Nepal. I have my own small company nowadays leading treks and climbs in the Himalayas.

I am looking forward to see what the new camera can do to your already beautiful photos!

Have a great evening
~Christina

Thanks, and have an awesome journey!