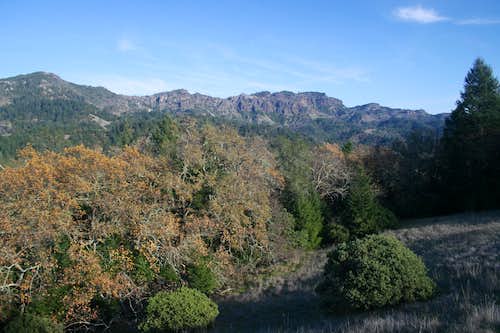 The Palisades from the lower flanks of Mount Saint Helena

The Palisades trail is one of the best hikes in California’s Wine Country. Combining epic vistas, awesome and unusual rock formations, solitude, and a surprisingly wild setting, it is a route that offers the kind of spectacular scenic payoffs one would expect in more mountainous and wild terrain. So remote is this trail that it can only be accessed by two other routes: the Table Rock Trail or Oat Hill Mine Road. The best way to travel the Palisades trail is combining all three routes. This involves leaving at car in Calistoga at the beginning of Oat Hill Mine Road and getting a ride to Saint Helena Pass, where the trailhead for the Table Rock trail is located. A trip involving all three routes is 11 miles long. However, the vistas along the way include Mount Saint Helena, Cobb and Boggs Mountains, Snow Mountain, the Sierra Nevada, Table Rock, the vineyards of the upper Napa Valley around Calistoga, the North Coast Range, the Palisades themselves, Mt. Diablo, and the entire length of the Napa Valley all the way to its southern end at San Francisco Bay. Besides the excellent views, the route has some of the most interesting trail engineering in the area and numerous smaller geologic features such as hoodoos and columnar basalt to further enhance the experience. 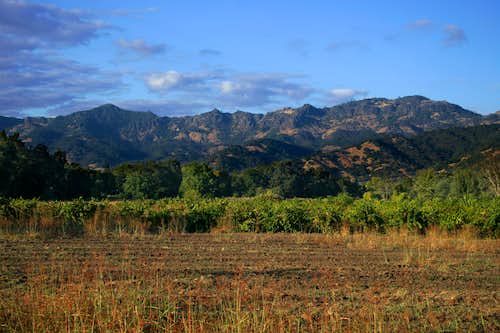 The Palisades from Napa Valley

The Palisades trail is the primary route through the Palisades. No road access either end of the trail. One must hike either Table Rock trail to reach the western terminus of the Palisades trail, or climb Oat Hill Mine Road to reach the eastern terminus. The best possible option is to park a car at the beginning of Oat Hill Mine Road and take a shuttle to the Table Rock trailhead and make the 11 mile descent to Calistoga, combining all three trails. 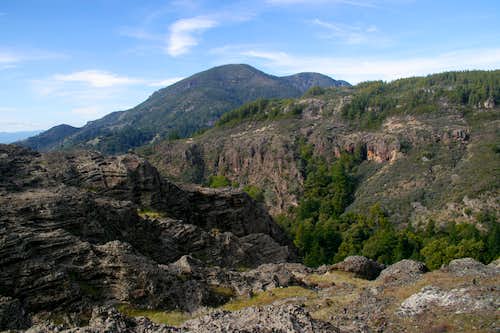 Mount Saint Helena from the summit of Table Rock

The trailhead for the Table Rock trail is located at Saint Helena Summit on Highway 29. The trailhead for Mount Saint Helena is located across the highway. The Table Rock trail climbs steadily up a ridge leading to the trail highpoint, known as the Turret. The forest canopy generally covers the route, but 0.25 miles from the trailhead there is a large outcrop that provides excellent views of Mount Saint Helena, Snow Mountain and the Clear Lake Basin (although Clear Lake itself can not be seen). From the turret, views of the Sierra Nevada and the Napa Valley are excellent. The trail then begins to descend into Garrett Creek Canyon. Near the bottom of the canyon, a telephone box marks the junction with the route to the base of Table Rock. Beyond the junction, the trail reaches and crosses Garrett Creek. It then begins to climb back out of the canyon, entering a gully that reaches all the way to the base of Table Rock. A sign marks the beginning of the Palisades trail. From here a short detour to the top of Table Rock is recommended. No trail leads across the moonscape summit, but the route is not difficult to follow. 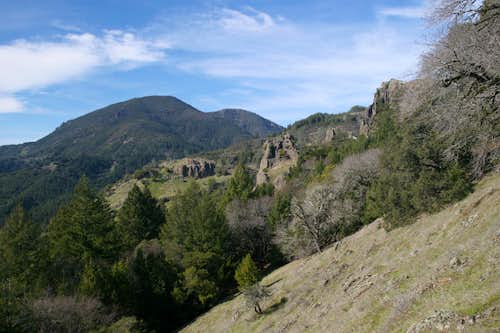 From the junction of the Table Rock and Palisades trails, the route begins to climb up the flanks of the western Palisades highpoint. The climb is not difficult and in short order the route begins to descend along the south-facing ridge that connects the Palisades and Table Rock. The trail is extremely well engineered, the grade is very gradual and the construction is excellent. At the switchbacks, large rocks have been placed to create stairs. In spite of the great quality trail, its narrow gauge and thick mat of forest debris indicates how little use it receives.

After several switchbacks, the trail finally levels out and soon passes a marker indicating the boundary of Robert Louis Stevenson State Park. The Palisades trail is now on Lasky Family property. If one looks back, the southwest nose of Table Rock is visible and Mount Saint Helena looms in the distance. The trail soon rounds a shoulder and one is treated to the first views of the Palisades. The band of dark rock is seen undulating along the ridge top, with numerous spires and high cliffs. A monument at the vista bears a plaque thanking the family of Moses Lasky for the right-of-way across their land. It further describes how Lasky was a lifelong climber, who climbed the crags of the Palisades and even participated in pioneering a new route up Grand Teton in 1980. 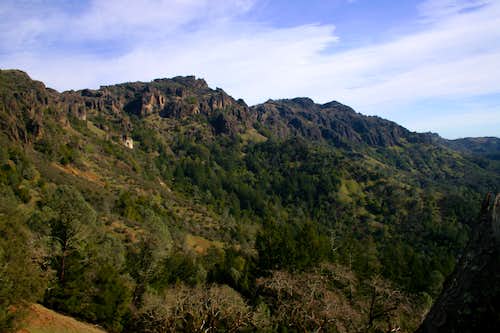 The Palisades from Lasky Point

From Lasky Point, the trail begins its traverse of the first amphitheater, where it reenters Robert Louis Stevenson State Park. The vegetation alternated between typical California chaparral, oak savannah and dense glades of firs and hardwoods. At some points the trail passes right along the base of the Palisades cliffs. Numerous gullies lead up into the interior of the crags, providing access to the higher portions of the Palisades. At the east end of the first amphitheater, the route passes through a particularly thick glade watered by a small creek. It then rounds a shoulder and passes into the second amphitheater. Throughout the length of the trail, the route it slung precariously on steep slopes that drop away from the base of the Palisades.

Once in the second amphitheater, the cliffs of the Palisades get higher, sheerer and craggier. Nonetheless, the trail remains similar than when it passed through the first amphitheater. It is generally level, with small ascents and descents. Views down into the Napa Valley and Calistoga are excellent and Mount Saint Helena is often visible. This section of trail passes a few more small creeks. It should be noted that with the exception of Garrett Creek beneath Table Rock and the creek draining the third amphitheater are all seasonal and even the two aforementioned streams are quite small after spring. 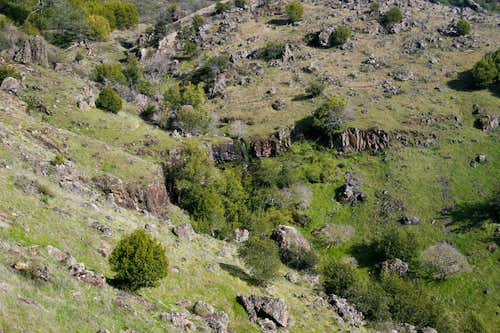 The wall forming the east end of the second amphitheater protrudes far out from the main band of cliffs. Consequently the trail passes further from the base of the cliffs. Views to the south are excellent here and Mount Saint Helena is particularly attractive. Soon the shoulder is rounded and the Palisades trail enters the third and final amphitheater. The east highpoint is visible and Duff lies just a short distance to the east. This area is further enhanced by the presence of a small waterfall formed by the main creek falls into a small grotto lined by volcanic rocks. When water levels are high the falls can be surprisingly large and two other ancillary falls also plunge into the grotto. This is one of the most scenic parts of the entire trip.

From the waterfall, the Palisades trail begins to climb. A ridge separating the western portion of the amphitheater from the slopes of Duff must be surmounted. To accomplish this, the trail passes through a short series of switchbacks, and then maintains a steady grade for about 0.25 miles. Shortly before the switchbacks commence, the route passes by a series of neat lava pinnacles. Once the trail reaches the top of the grade, it is directly beneath the final cliff section of the Palisades. The east highpoint lies atop the cliffs. The highpoint, though shorter than the western highpoint by 2 feet is the more attractive of the two, being an excellent example of columnar basalt. 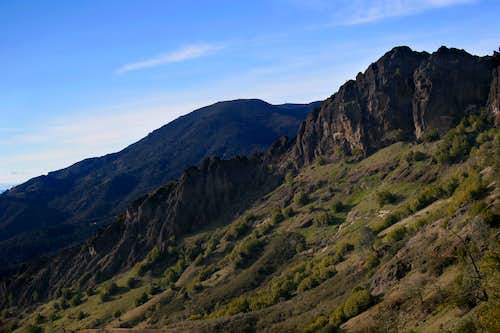 Two high waterfalls are found along this section of trail. Both fall into small grottos with dense vegetation. They tend to fall away from the cliffs so that by the time they reach the ground, it resembles rain more than a waterfall. The second of the two falls is particularly nice, falling on a large flat rock ten feet above the trail. Climbing up onto the moss and fern covered rock and standing under falling water is an excellent treat this far into the trip. After the small waterfalls, the trail turns north and makes a swift descent down to Holm’s Place. Large hand-hewn stones form the ruins of the old homestead. The presence of a big stone hearth is particularly interesting. From the ruins, it is only a few yards further to the historic Oat Hill Mine Road. The road was constructed to access an old mine beyond the homestead. Wagon ruts worn into the volcanic stone are still visible in the upper sections of the trail. One must respects the men and beasts that traveled this road in the past. 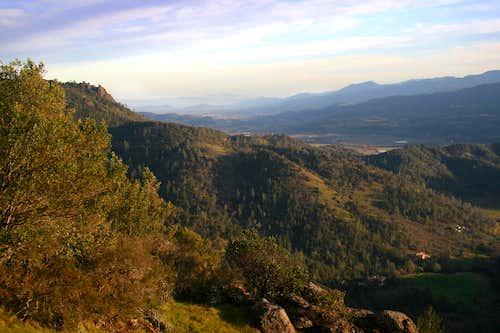 The Napa Valley and Mt. Diablo from Oat Hill Mine Road

The upper portions of Oat Hill Mine Road pass along the western flanks of Duff, the peak that marks the eastern terminus of the Palisades. Beyond Duff, the ridgeline softens and there is little exposed stone like the crags that form the Palisades. The views of the Palisades from this section of trail are magnificent. Saint Helena is seen towering in the distance. Soon, however, the trail turns eastward and passes along the southern ramparts of Duff. The entire length of the Napa Valley comes into view and Mt. Diablo is visible on the distant horizon. The view is amazing and remains constant for nearly a mile. From the base of Duff, the route passes along the eastside of a large group of crags and then turns west again, passing beneath Bald Hill. This is the last view of the Palisades. Beyond Bald Hill, the views of Napa Valley persist for another 0.5 miles before the trail plunges into the forest. From this point on the views that have been constant throughout the entire trek are lost, save for an occasional clearing. A couple more miles deposits one at the Oat Hill Mine Road trailhead, right across the street from an excellent pizza parlor.

A small portion of the Palisades trail passes through private property. The Lasky family has been generous to provide an easement through their land. The boudaries of the state park on either side of their property is marked so it is important to respect the private property while passing through it.