E view from the summit
Pančićev Vrh (2017 m) is the highest peak of KOPAONIK, the biggest mountain range of the central Serbia, which spreads its wide mountain-ridge 82.7 km long, its greatest width being 63 km, in the direction from the mountainous region over Kosovska Mitrovica, to the north-west over the series of peaks higher than 1600 m, to the highest part of the massif called Ravni Kopaonik (Flat Kopaonik) with the peaks: Gobelja (1934 m), Karaman Vuchak (1936 m), Suvo Rudište (1976 m) and Pančićev Vrh (Panchich's Peak) (2017 m).

Kopaonik was declared a national park in 1981. The national park spreads over 120 square kilometres - 12000 hectares. A vast high mountainous and relatively flat region at an altitude of about 1,700 meters forms the basis of this national park.

Pančićev Vrh is placed in the northern part of the central part of large Kopaonik massif. The bootom of Pančićev Vrh is overgrow with conifer forest. Pančićev Vrh is in Serbia also called as a "Krov Srbije" (Roof of Serbia) and present some kind of national pride. The summit is easy reacheable from Konaci tourist complex. That's a usual hiking tour without any exposed detail on the path.

The summit of Pančićev Vrh offer enjoyment in many beautifully panoramas and views in all directions. From all of views two are most beautiful and impressive - to Durmitor and Sinjajevina in Montenegro and to Šar Planina (Serbian-Makedonian border). SINJAJEVINA and DURMITOR from the summit of Pančićev Vrh (2017 m)

SERBIA is situated in the center of the Balkans, on the most important roads, which connect Europe and Asia, and covers the territory of 88.361 square kilometers. The length of the borders is 2.397 kilometers. In the east it borders upon Bulgaria, in the northeast upon Romania, in the north upon Hungary, in the west upon Croatia and Bosnia and Herzegovina and in the south upon Albania and Macedonian.

Serbia is the crossroads of Europe and geographically and politically important territory. International roads and railways, which pass down the valleys of its rivers, are the shortest connection between Western and Central Europe, on one side, and Near East, Asia and Africa, on the other side.

Serbia is in CET- central Europe time zone (GMT+1hour). Summer time is from the end of March till the end of October (GMT+2 hours).

North Serbia, Vojvodina, is mostly a plain, while Central and South Serbia are hilly and mountainous. 15 of the mountain peaks reach the height of over 2000 meters, and the highest is Djeravica (2656 m) - (now on territory under UN protectorate) on Prokletije. Serbian rivers belong to the basins of the three seas- Black Sea, Adriatic Sea and Aegean Sea. Three of them are floatable: Danube, Sava and Tisa. The longest is Dunav (Danube). Its total flow is 2.857 kilometers and it flows 588 kilometers through Serbia.

The climate in Serbia is temperate and continental with nuance between the four seasons. Summers are hot and winters are cold and snowy.

There are 7.478.820 inhabitants in Serbia (not counting Kosovo and Metochy), and that’s 94.1% of the entire population of Serbia&Montenegro. Serbs make 66% of the inhabitants, Albanians 17%, Hungarians 3.2% and then there are the Romanians, Romes, Slovakians, Croatians, Bulgarians, Turks, etc. The population is mostly of the Orthodox Christian faith. However, there are other religious communities: Islamic, Catholic, Protestant, Jewish, etc.

In Serbia people use Serbian language of aecavic and iecavic pronunciation. It belongs to the group of south Slovenian languages and it is most similar to Bosnian, Croatian and Macedonian languages. A great number of our words are of a foreign origin, mostly Turkish and German, but today there are more and more anglicisms. Serbian language consists of 30 voices and two letters - Cyrillic and Latin characters. What makes it unique among other languages is a simple rule by which it is written and read: one letter for each voice and vice versa. You will mostly meet Latin characters, but the names of the streets and the information at the bus and railway stations and at post offices are written in Cyrillic. Therefor, it would be very useful if you learned the capital letters of Cyrillic, at least. Most of the young people speak English, less German, French and Russian, but Spanish and Italian are getting more and more popular, every day. KOPAONIK landscape from ascent on Pančićev Vrh
By plane:

- To Belgrade/Beograd airport, distance about 250 km from Kopaonik mountain.
- To Nis airport (read "Nish"), closer to Kopaonik than Belgrade airport.
Than, from Belgrade or from Nis town - to Kopaonik by bus or car.

Kopaonik is well-connected with the main transport routes in Serbia. The central part of Kopaonik with the tourist center and ski slopes is linked with the Ibar Highway by a modern tarmac road. The nearest airport is in Nis town. 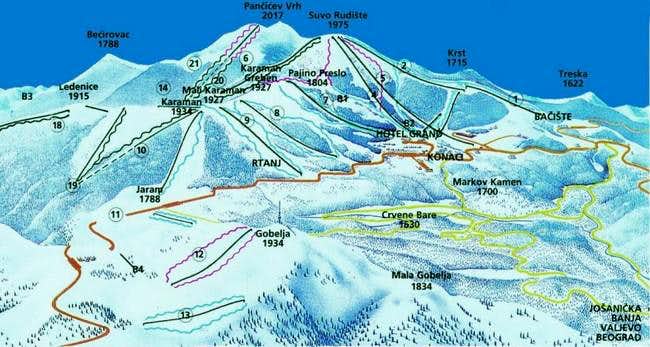 No camping fees for paying. On the mountain you can choose place for camping from many places inside of Kopaonik massif.

Place: Region "Pajino preslo"
Configuration: Building with ground-floor (dining room) and first floor (rooms)
Capacity: 22 beds. Two double-bedded and three six-bedded rooms.
Conveniences: Electricity, water supply, near by there is springwater. There are bathroom and two toilets. Kitchen is well supplied with all needed dishes and eating utensils. There are electric heaters in rooms and in the dining room.
Environment: Near by there are cable railways which cover all skiing fields in this part of Kopaonik (Suvo Rudiste, Karaman, Gobelja.). There are other tourist and catering objects too.
Arrival: Home is 10 minutes away from "Konaci".
Administrative office: PSD "Avala", Belgrade, Francuska street No 32-a.
Contact: Miodrag Radoicic, phone: +381 11 186719
Lodgings: Home is opened during all year.

Place: Near by "Konaci", at spring Marina voda (Mara's water) and cable railway Karaman.
Configuration: Building with ground-floor (dining room), first floor and attic.
Capacity: 50 beds in four-bedded and multi-bedded rooms.
Conveniences: Electricity, water. On every floor there is bathroom with hot and cold water. Every room has washstand with hot and cold water. As part of the dining room there is a little kitchen with boiler, dishcloth and refrigerator, so it is possible to cook or store smaller amounts of food, TV.
Arrival: You should take the road "Ibarska magistrala" until you get to the Biljanovac, across Josanichka banja, or from Krusevac and Prokuplje across Brus and Brzece. You can also take the train for Raska to Rudnica and than another 20 km across Makadam's road.
Administrative office: PSD "Kopaonik", Belgrade, Brace Jugovica street No. 19.
Contact:
- phone of the home: +381 36 71190
- Milomir Miladinovic, Kraljice Katarine street No. 74-a, phone: +381 11 544063
Lodgings: Home is opened during all year, and it has its janitor. During ski-season, ski-schools and competition teams have advantage.

Place: Under the peak Karaman.
Configuration: The biggest mountain home in our country, it has three floors.
Capacity: 180 beds. 46 double-bedded to six-bedded rooms and 4 eight-bedded to fourteen-bedded rooms.
Conveniences: Home is in the rank of "B" category hotel.
Environment: Complex of cable railways which connects all ski-fields on Flat Kopaonik.
Arrival: Home is 15 minutes on foot away from "Konaci". There are direct bus lines from all bigger places in Serbia.
Administrative office: Private owner (rent), and owner is PSD "Rtanj", Belgrade, Bulevar Revolucije street 73.
Contact: phone: +381 36 71090 (head-office).
Lodgings: Home is opened during all year.
Price: There are market prices in the home and mountaineers doesn't have any benefits.

5 and 7 days weather forecast for Kopaonik on this two pages: