peaks of the Jarbidge Mountains

Five Peaks along the spine of the Jarbidge Mountains, North to South

Dennis, Matt and I set out on a fine Independence Day morning (~07:15; using Utah time) from our campsite in Pine Creek (USFS) campground, just south of the town of Jarbidge Nevada [Note that Jarbidge is misspelled as "Jarbridge" on some maps, e.g., Google]. We walked north a short distance to Forest Road 58318 (road to the Bluster Mine) and started up that. Our intent was to follow Forest Trail 194 from the inactive mine workings, which is shown by the official wilderness map (USFS, 1994) as leading to a point near the ridgeline - but we could not find it! It was overgrown and obscured. Instead, we headed up the shoulder dividing Bonanza and Gorge Gulches. This presented no bushwhacking problems as the vegetation was low, but we soon encountered talus. Loose rock/soil was the only particular difficulty of this hike. At ~10:40, we got to the summit of our first peak of the series: Jarbidge Peak (elev, 10,789' or 3288m; 41.8463N,115.3902W). 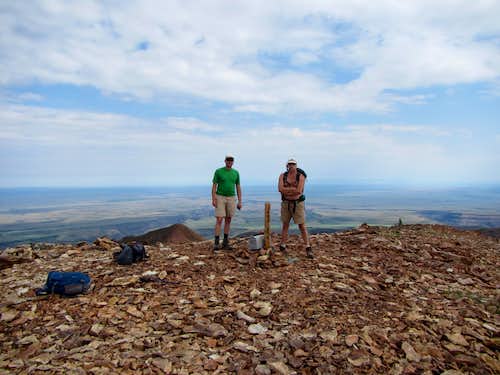 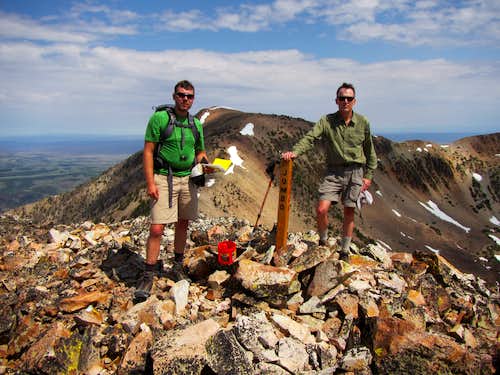 Matt & Jim on summit of Jumbo Peak (Jarbidge Peak in background)
At ~12:30, we reached the north (higher) end of the long summit of Squaretop (elev. 3257m; 41.8216N,115.3805W). We made the mistake of choosing a prominently visible trail in the talus field which skirts the west side of the mountain. It turned out to not lead to the top but only to traverse under the mountain. We realized our mistake and climbed upward to the north (higher) part of the summit in a sea of loose rock. 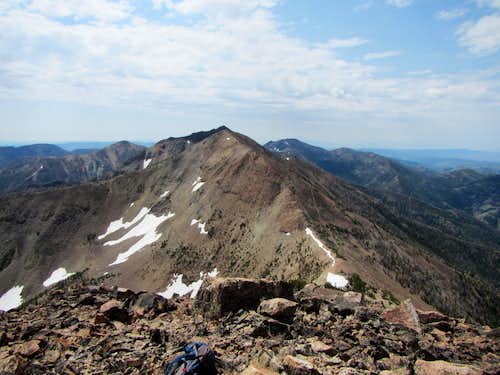 Squaretop Mt (with summit of Matterhorn peeking above it) from summit of Jumbo Peak. Do not follow the worn trail which skirts the right (west) side of the mountain if you want to get to the top - stay on the ridgeline! Jarbidge Mts, NEVADA
At ~13:45 we came to the summit of the Matterhorn (elev. 3303m; 41.8107N,115.3746W). This is the high point of the Jarbidge Mountains. Although not strictly comparable to its namesake, it is an impressive mountain nonetheless. The north face has a peculiar yellow-orange tinge from the lichen on it. The descent from Matterhorn was particularly difficult - with the rock very loose and prone to slide underfoot. Indeed, the saddle between Matterhorn and Cougar Peak was the most difficult of the day: (1) we were already lower on energy, (2) the saddle was more acute and rocky (less gentle and rounded) than previous saddles, and (3) the weather-ravaged whitebark pines were denser and difficult to penetrate. 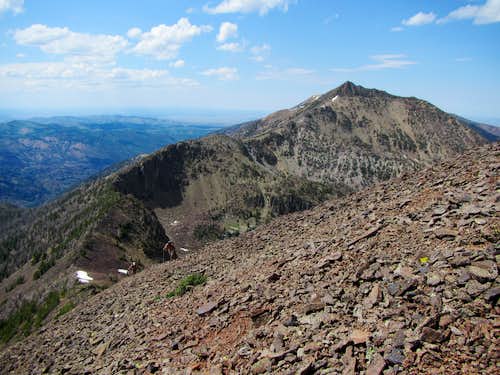 Matterhorn, seen from summit of Cougar Peak. Jarbidge Mts, NEVADA. Note the more acute and more heavily vegetated ridgeline between the two peaks: quite unlike the previous saddles.
At ~16:10, we topped our final peak of the day: Cougar Peak (10,559' or 3219m; 41.7928N,115.3673W). Here, a fine view of Emerald Lake basin presents itself. 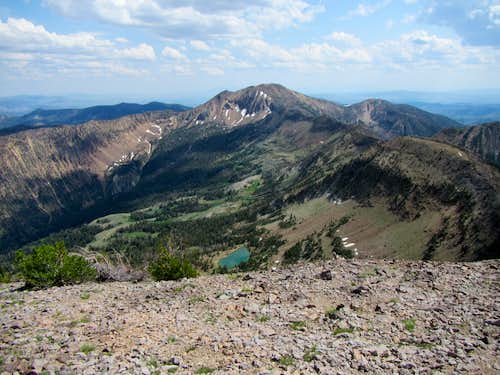 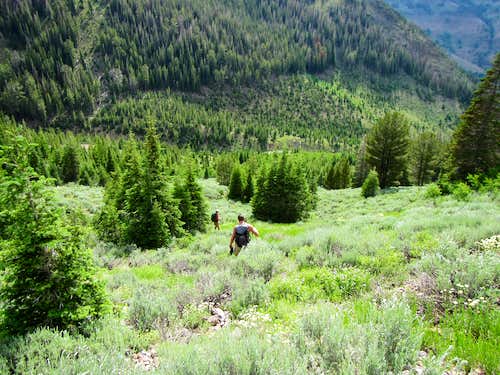 bushwhacking down from Cougar Peak. Jarbidge Mts, NEVADA
As we were running out of steam, we decided to drop a short distance south on the ridge from Cougar Peak and immediately turn west to bushwhack to Forest Trail 105. Although it shaved a good distance from the hike, we encountered both loose terrain and bushwhacking. We were much relieved to finally encounter the trail. We made good time back to Pine Creek campground, arriving ~19:40 in a good rainshower. We had a satisfying dinner at the Outdoor Inn in Jarbidge.