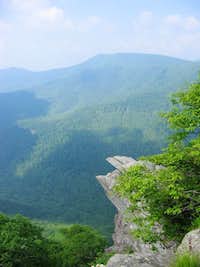 Pickens Nose is one of the outstanding peaks not only of the Standing Indian Basin, but also of the entire extreme southern Appalachians. It's a prominent, rocky ridge near some higher, but no more intimidating summits that make up the highest uplands south of the Great Smoky Mountains.

Pickens Nose is named after one of the area's resident mass murderers of the Cherokee, General Andrew Pickens of upstate South Carolina. Whether it was named in honor of Pickens, or to spite him, I'm not sure. But the peak retains its humorous title and it remains one of the southern highlands finest grandstands, rivaling some better known peaks.

The peak is now within the borders of the Southern Nantahala Wilderness, and is also surrounded by the Coweta Hydrological Laboratory, and thousands of acres of Nantahala National Forest lands and protected bear habitat. Indeed, the bears are as thick in this area as any I've seen.

Pickens Nose is a minor rock climbing site with a number of opportunities for rock climbing and rappelling. Since it is in a wilderness, I assume no defacing of the rock wall is allowed.

From NC 64 take the Wallace Gap Road toward the Standing Indian Campground. Pass the campground on Forest Service Road 67, passing first the campground entrance (where the road changes from hardtop to gravel) and beyond the Backcountry Information Center (a glorified bulletin board). Drive on this well maintained gravel road for about six miles until you come to a fork with a sign indicating "Albert Mountain" on the left and "Coweta" on the right. 67 is on the left and the right turn is Forest Service Road 83. Drive until you see a gate. If the gate is closed, park there and continue on foot for about fifty feet to the Pickens Nose Trail which will be on your right. But the gate should be open and you can drive to the trailhead and park there.

There is only one trail to the summit: The Pickens Nose Trail. This trail follows a very narrow ridgetop through a lush Southern Appalachian forest of hardwoods, rhododendron, and mountain laurel. At times, it's as if one is walking through a tunnel. The trail only gains about 200 feet of elevation over about three quarters of a mile.

No charges to either hike or climb. Since this is at the border of the Southern Nantahala Wilderness, all wilderness rules apply: no open fires and no groups over ten.

There are developed and semi-developed campgrounds at Standing Indian ($14 per night) and Hurricane ($6 per night) on Forest Service Road 67. Camping is also allowed within the Nantahala National Forest and in the backcountry where one wishes to pitch a tent (free of charge).

Check the weather for Franklin, NC. Subtract about ten degrees.