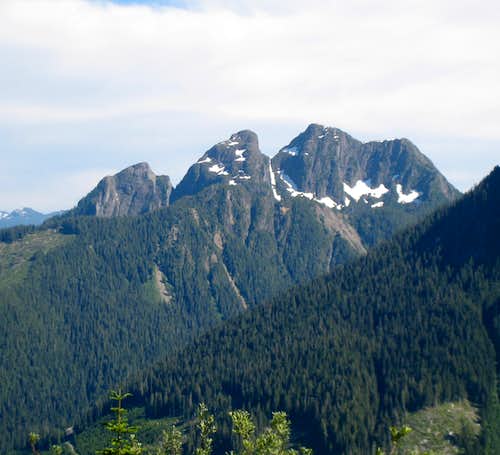 Queen Peak NW Aspect
Situated between the east and west branches of Consort Creek and the White River to the north, Queen Peak is another of the cadre of mountains on Vancouver Island, British Columbia, whose name reflects the history of the island as a Crown Colony. In the 19th and early 20th centuries, even after the Island had become part of the new Province of BC, the predominantly British colonists retained strong ties and unwavering loyalties to the mother country and in particular to the Royal Family of the Saxe-Coburgs (later the Windsors). Thus we have Victoria Peak, King's Peak, Crown Mountain, Mt George V, Mt Albert Edward, Alexandra Peak (for the wife of King Edward VII (earlier Prince Albert Edward, eldest son of Queen Victoria)) and more. The Queen referred to here is, of course, Queen Victoria who’s other namesake lies across the western branch of Consort Creek (naturally) just 3 km away.

Queen Peak has nothing like a trail and accessing the rarely visited summit requires a certain tolerance for steep logging slash and forest. Mitigation for the initial hard work is, however, easily found in the hike along the lovely open east ridge to the summit where, reputedly is to be found the best view of nearby Victoria and Warden Peaks anywhere on the Island.

Vancouver Island can be reached by air from eg Toronto, Vancouver, Seattle, Calgary or San Francisco to Victoria, Nanaimo, Comox or Campbell River and by ferry from Port Angeles to Victoria on The Coho and on BC Ferries from Vancouver to Victoria or Nanaimo. Public transport on the Island is notoriously poor and anyone arriving by air would be advised to rent a car.

There is some gravel road involved in getting to the Queen access spur but, generally, a normal 2WD sedan is fine. Progress up the access spur is for high clearance 4WD vehicles only. Since it`s only 400-500 metres to the end of this spur, however, those without off-road capability can always park at the bottom and walk up.

Approach the mountain from the south on the Inland Island Highway 19 from Victoria or Nanaimo.

Drive Highway 19 north of Campbell River to Sayward Junction. At the junction turn left to access the White River mainline. This can be a little confusing. After turning off the Island Highway keep straight and cross the White River. At the now-closed gas station turn right again and after a further 400m right again. In 150m turn left uphill onto White River Main.

Drive the wide, well surfaced gravel – watching out for logging trucks – 29 km and find Stewart Main on the left. Drive Stewart Main along the east branch of Consort Creek, past Stewart Lake and find the spur you need after 12 km at 9 U 712117 5546850 (NAD83). Switch to 4WD and drive up the spur almost to the end where it`s flat and wide enough to park, camp and turn around.
Update from slayer November 2015. The spur at  9 U 712117 5546850 is now partly blocked by a large boulder. A smallish vehicle could get around it but those with larger trucks may have to walk up from Stewart Main. It's not far and the main inconvenience is probably the loss of a nice isolated car camping spot.

Right at the very end of the spur you will note flagging marked "trail". Ignore it. It goes nowhere. Instead start from 9 U 712356 5547147 and make your best route up through the steep slash to climber's left of the island of seed trees that have been left in the clearcut. Aim for an obvious big fir that sticks out right on the edge of the forest.
Once in the old growth you will note that it`s steep but very open. Make your best route northwest and up to the alpine on the east ridge. You should hit the ridge at about 9 U 711863 5547910. About halfway up you will have to detour to the north to make an end run around a set of bluffs. Continue NW once you`ve done this. An indication of the unrelenting steepness of the route is the fact that it's a vertical gain of about 650 metres to the ridge in a little over 900 metres of map distance. The route in the old growth is flagged as of summer 2013.

Once on the east ridge it's a pleasant and easy hike of a kilometer or so to the summit where, hopefully, you will enjoy the views of Victoria and Warden that cloud obscured on our visit.

The summit register contained just 4 entries including our visit. Two of these indicated that the climbers had come from new logging roads in the west branch of Consort Creek. If anyone has done this and wishes to add this route, please go ahead. 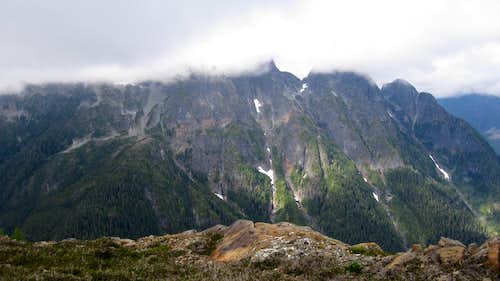 Queen Peak Summit View
As always a Garmin/Mapsource tracklog is available for the approach and route on Queen Peak. As a general rule I don't make routes universally available as GPX files but just ask for it via an email or PM

As always, make sure that you have left a detailed trip plan with someone responsible. The RCMP and the appropriate SAR agency will respond in an emergency but it is up to you to have the mechanism in place that will initiate the call-out process if it becomes necessary.

There is very unreliable cellular reception on Queen Peak. Nothing on the summit but sufficient to send and receive text at the end of the east ridge before entering the forest.

Good car camping on the logging spur right at the start point. Or there is an established forest company campsite on Stewart Lake that you pass 5 minute/3 km before the spur.

For precise directions get hold of a copy of Backroad Mapbook. Volume 7: Vancouver Island

Sayward weather will likely be a useful predictor for the vicinity of Queen Peak.