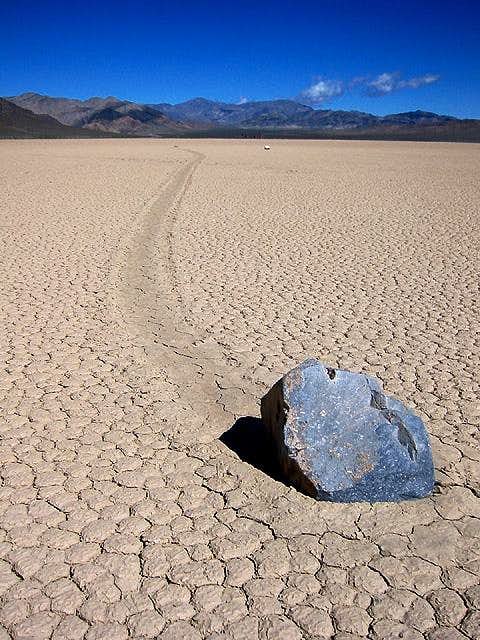 Rocks like this at the racetrack playa are deposited at the playa edge by adjacent slopes and cliffs, and then they raft around for quite a while leaving winding trails along their path. No one has ever witnessed the rocks in motion, and surprisingly, the general trend of movement is slightly uphill. One theory on what makes them move such great distances is that they are blown by wind and move when the playa is wet and slippery. Another theory is that their movement is aided by an ice surface created when the wet playa freezes on cold nights. These are now challenged by an "ice-raft" theory, see: http://blogs.agu.org/landslideblog/2013/05/17/was-the-bingham-canyon-landslide-the-largest-ever-non-volcanic-landslide-in-north-america/
« PREV NEXT »

You raise some good points, but I am not sure they disprove the gravity model. Here is my justification:
Assumption 1) If mud acts as a high viscosity fluid then it would flow downhill.
Assumption 2) Net movement (both rock and mud) are described by vector sum, not a single vector. In other words, the mud is moving in many directions (all downhill) and the net movement in any given location is the sum of simultaneous movement in all of the various directions.
Assumption 3) The magnitude of the component vectors is not constant over time or space. As mud builds up, the flow towards that point slows. Similarly, the production of semi-fluid mud may not be constant over time and space (e.g. differential heating across the valley over the course of a day and/or seasons).
If these assumptions were true, I wouldn't expect the track or the rock to move in a single direction over time.
As to the track, boats leave a track in water. The higher the viscosity, the longer the track will be visible. However, I can not explain why the surrounding cracks (not the track) do not fill in.
All of this is conjecturer, but I find the wind and/or ice model hard to believe. Please post another message if you have any other thoughts on the matter. The topic is fascinating.

I never knew about this phenomena before!