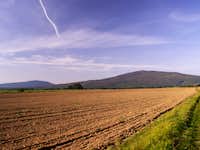 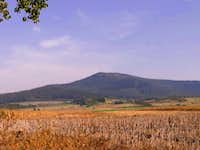 A drive from Wrocław, the capital of Lower Silesia (Dolny Śląsk), to the foot of Radunia takes approximately forty minutes. You can take either DK (national road) 35 heading for Świdnica (leave the road at Mirosławice, angling left to follow the signs for Sobótka; from Sobótka drive south to Sulistrowiczki/Tąpadła) or E67 (at Jordanów Śląski turn right and head west to Świątniki, then follow the signs for Księginice Małe and Będkowice; in Będkowice turn left). The nearest car park to Radunia is located at Tąpadła pass, just about one kilometre northwest of the summit. As for public transport, there is a bus route Wrocław–Sulistrowiczki. In summer, the bus may go to Tąpadła.

The summit area is a nature reserve which until recently was crossed by a waymarked trail running along the crest of the mountain. Since the end of 2017 the old (over a hundred years old) path running along the crest of Radunia has been closed in an awkward attempt to protect the local flora (which beyond a shadow of a doubt does not grow on the path) – what a shame! 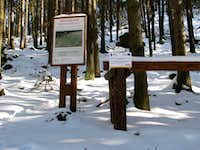 Another nature reserve named Łąka Sulistrowicka (Sulistrowice Meadow) is situated just south of Sulistrowiczki. Camping on the mountain is forbidden; it wouldn't make much sense anyway. The nearest campsite is in Sulistrowice, by a little dam. At Tąpadła pass, there are guesthouses and self-catering chalets to rent. 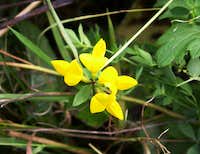 When To Go & Essential Gear 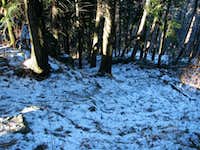 Icy steps on NW side 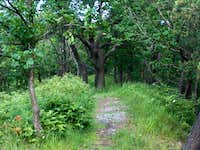 Oaks on ridge in summer

If possible, do not go at a weekend unless you feel like joining crowds of weekend tourists from the city of Wrocław. In winter crampons or mini-crampons are advisable. Besides icy paths on the northern slopes, in some places the dirt roads turn into ice-rinks. Beware of verglas on the innocent-looking paths near the foot of the mountain too. As for the warmer seasons, just bear in mind that ticks are not uncommon in the area.

Old photos (taken over a century ago) of the remains of the ancient rampart can be seen on dolny-slask.org.pl. 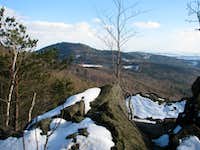 A special thanks to Romuald Kosina for his photographic contributions. 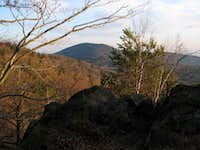