The RC Hind hut is named after Robert(Bob) Hind, a legendary Canadian climber who was very active in the ACC. The ACC built the hut for BC Parks in 1971 and the hut is maintained and booked through the Assiniboine Lodge.
(see below)  Renovated in 2011 and is now light brown. 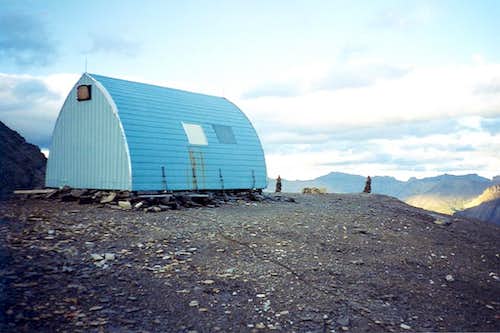 Liked these comments: He climbed Robson in 1936. After the Bugaboo camp of 1947, Bob was returning to his hometown of Calgary through Banff by train. Having some spare time, he got off the train, walked in and climbed Mount Louis solo, came back to Banff, got on the train and continued home. In the year following this climb he fractured his ankle badly in a fall. In order to continue his climbing career, Bob had the surgeons freeze the ankle at a slight upward angle that would permit uphill walking and climbing.

This hut is generally very busy in the limited summer season of late July, August and sometimes September. No camping allowed so book a space.
The hut is a one room unheated building and sleeps 12-15 climbers on dormitory style plywood platforms. Foam mattresses are supplied. There is no lighting so bring headlamps which you will also need for the early alpine start.
The hut has a table, benches and a two burner propane stove for cooking only. Fuel, pots, dishes and utensils are supplied.  No personal stoves or candles are allowed.
Nearby outhouse. Water is meltwater from Strom snowfield.  Greywater down sink. Pack all garbage out.
Emergency Radio Phone: There is a two-way radio at the Hut for contact with Assiniboine Lodge. Banff Park weather forecasts are available by radioing Assiniboine Lodge at 6:00 pm.


To reserve the Naiset and Hind Huts and book helicopter flights to and from Assiniboine, contact: 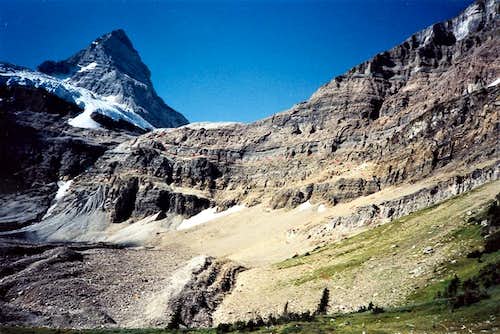 Gmoser Highway ledge route to Hind Hut, Assiniboine
See here for approaches to area.
There are two ways up to the Hind hut.
1. From Alberta - Gmoser Highway Ledges - (see large res pic above and many attached pics)

Helicopter or hike in either of two ways to Assiniboine Lodge by Lake Magog. Hike trail around right side of lake and follow trail sign to Hind Hut.

Trail angles up and left on grassy/scree slopes to bypass a grey rockband and then back to right and scramble up a gully weakness in a brown rock band.
Cross a large scree ledge angling up and left and follow cairns and trail up a series of narrow ledges which make a long traverse left to a gully. This gully is frequently filled with snow so kick steps(may need crampons) up gully or climb rock along left side.  Hike/scramble up easier ledges, scree , talus and snow patches following cairns to the Hut.
Expect 4 to 7 hours from Lodge.
DO NOT ATTEMPT SNOW Couloir/Gully farther to Left as there is a waterfall under it that makes it hazardous.

2. From BC see below for detailed description