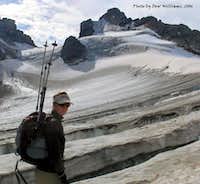 Although this route requires more elevation gain (8200’ total, car return to car), it is considerably shorter than the traditional Alberta approach via Bryant Creek. It discontinues becoming a trail and becomes more of an alpine approach at Assiniboine Lake at the top of Assiniboine Creek. The glacier travel is relatively short but requires standard glacier travel protocol, not to mention your typical crevasse route finding skills. This 11km+ approach can be done in approximately 5-8 hours each way. It is more than a 160km drive from Canmore, AB to the trailhead, a considerable amount of which is traveled on gravel road.

If you are looking for a scenic, wild and less crowded approach to this popular objective, this is the route for you. On a mid September trip in 2006, we did not see another human during the entire trip in or out.

From Banff to the east, gain Highway 93 off of the TransCanada to Radium Hot Springs and enter Kootenay National Park in British Columbia. Drive to Vermillion Crossing and continue for another 43kms to Settlers Road on the left which is well signed. Settlers Road is used by truck traffic serving Baymag Mine therefore caution is advised. These trucks use radio correspondence to report each others position and drive accordingly. Continue down Settlers road past the 12km marker and then take Cross River Forest Service Road to the left. Follow the Cross River Forest Service Road to Baymag Mine at the end. Before you cross the final bridge into the mine, turn right on an old dirt logging road. Travel approximately 4kms over two bridges to a small parking area that lines up with Assiniboine Creek due north. In 2006 there was a limited supply of chicken wire and logs that can be utilized to protect your vehicle from porcupines. 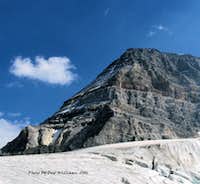 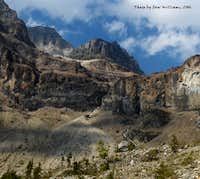 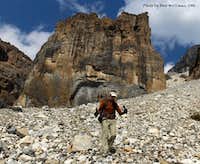 Pick up a faint trail through the clear cut area heading due north for the right side of Assiniboine Creek. Once into tree line the trail becomes more definitive. This is a trail used more often for the Mount Lunette and Mount Assiniboine (south face) scrambles. Cross a small creek and continue to a much larger runoff that requires a log crossing. In 2006 we found a well established log with a corresponding cable wire strung across for an easy crossing. In the past, this has been considered a difficult water crossing. Continue up the trail to a Y intersection, take the left fork. In approximately 2 hours from the car you should find yourself at Assiniboine Lake, which reflects more emerald than Emerald Lake in Yoho National Park.

After you skirt along the right side of the lake, the trail peters out and the scramble portion of the approach begins. Ascend up a large basin towards a massive red rock buttress that divides this amphitheaters’ north exit. Turn this flat top buttress to the right. On ascent through this rocky portion, you will notice a unique “port hole” waterfall coming out of bedrock to the far left. This port hole is several hundred feet below the top of a massive headwall and makes a thunderous noise heard throughout your ascent. Once up to the right side of the buttress, stay close to its south east wall and ascend loose scree and talus up to its top which forms with a ridge bleeding east. Cross over this ridge and aim for the glacier now in view further north. Mount Sturdee’s steep west flank has waterfalls that originate from an ice shelf further up. Once you pass through this drainage, gain the glacier up the left hand side where it is less steep to make access.

We traveled the glacier un-roped due to good crevasse exposure and little if any fresh snow. You will want to work your way right to avoid the harsher crevasse terrain to the west. Never venture out full on center, but definitely keep working back right as you circumvent many open crevasses. Mount Lunette’s glaciated northwest face comes into full view to the right. Continue straight for Mount Assiniboine’s northwest corner. You will ascend a small wind ridge of snow on the glacier and then descend to get off the ice and onto moraine. There were no cairns or evidence of a trail when we got off the glacier in 2006. Ascend a very tedious talus and scree slope up to the col between Mount Strom and Mount Assiniboine. Once you reach this col (9500’), the north face of Mount Assiniboine comes into full view. The hut is also now visible some 400’ below to the west.

Descend some talus to a small patch of glacier that leads towards the RC Hind hut. You can avoid using crampons by staying close to the talus until it finally leads you to moraine that heads over to the hut. The RC Hind Hut is approximately at 9000’.

From the RC Hind Hut, the total elevation gain to the summit of Mount Assiniboine is approximately 3100’+ due to elevation loss to begin your ascent. There are several ways to gain the north ridge of Mount Assiniboine, none of which avoid the scree or loose talus, but once you make it to the first solid rock at 9700’, it is much more pleasant. The first rock band is at the base of the ridge right beside a glacier that comes down from the Mount Magog-Mount Assiniboine col. As is most always the case, it looks much tougher from the hut window than it actually is. Easy scrambling gets you to the top of this short section, and then a long loose plod through snow and rock takes you up the left side of the face to an easy break in what they call the “red band”. I soloed Mount Assiniboine and, my extensive experience aside, felt this route was little more than a glorified scramble. That being said, you will find extensive rappel stations slung throughout the entire route from bottom to top. The red band break is obvious whether you are studying it from the hut or on route. It is a shallow section that goes like a scramble and can be just as easily down climbed.

Once through the red band, move left to gain the ridge itself and scramble up on good ground to what they call the grey band. This section is no doubt the crux and turned Sepp Renner (been to the summit of Assiniboine over 40 times) and several of his clients around the day before my ascent due to veriglass or rime on the rock. Although I found evidence of some ice coating the rock, crampons were not necessary on my ascent and would have been more of a hindrance than an asset. Again, you will pass many rappel stations and the scrambling gets more challenging the further up you go. The crux is one small pitch at the top of this section. You move a few meters right along a ledge and ascend an obvious line past a piton or two climbing slightly back left. Once you top out here, it is easy going until eventually you see the real summit which is hidden from the hut perspective. Another 5-10 minutes and you will be at the summit which is almost always corniced. There was no visible cairn in September 2006 and if there is one, it no doubt is buried in snow the majority of the year. You can also expect your own little mini storm at the summit most days as well.

Descend the entire route the way you ascended. I took three rappels on well established piton rappel stations to get through the rime covered portion of the upper grey band. I used a 60 meter rope, but could have gotten by with 40 meters. The rest of the route is relatively easy to down climb in dry conditions. My total hut to hut time was 4.5 hours, but expect 6-8 to be the norm for experienced peak baggers and I saw one hut log entry of 17.5 hours! The elevation gain to the hut from the BC approach was 4500’+/-. Summit day was 3300’+/-. Your descent will require another 400’ gain to overcome the Mount Strom col again.

40-60 meter rope, if placing pro, a few mid sized cams and nuts, harness, helmet, crampons, alpine axe for glacier travel. If you are roping up for the glacier, self extraction gear. Boots are more than adequate for any required rock climbing on the north ridge. The hut is well equipped for a few parties, but if you know it is going to be full, take your own stove, pots and fuel. My wife and I had it to ourselves and thus it served as quite the resort in that case. You can leave your payment for Sepp Renner at the hut. He has it stocked with a radio for check in and emergency purposes.