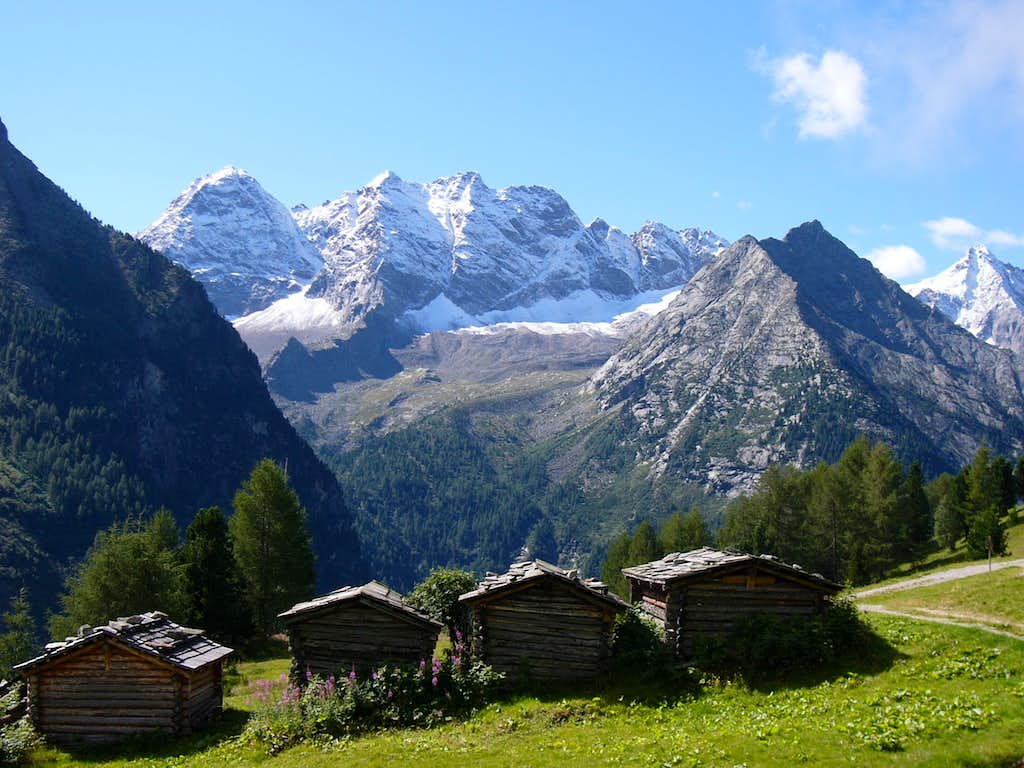 View of some peaks in the Rieserferner Group (Schwarze Wand 3104 meters) from a pleasent trail over the Reintal/Valle di Riva. August 2006
« PREV NEXT »

The picture was taken from the trail to the beautiful Durra Alm, located in the Knuttental/Valle dei Dossi. It was a very sunny day (so rare this August !).

Oh, really? It's some 300m above the valley. We were biking through Knuttental/Valle dei Dossi. We were sleeping in tents on the Austrian side and then biked by a nice road on Klammljoch/Passo di Gola and down in Rain and further in Brunico/Bruneck. So, we couldn't see this scene because it's above the valley.

This year or in the past? The next time, please, let me know if you are in Ahrntal-Reintal. Every year, in august, I spend 1 or 2 week in Sand in Taufers with my family. I'd like very much to meet you.
Ciao
Paolo

Yes, it would be fine to meet somewhere in mountains. We did the bike tour in 2003. It's on SP.

Makes me homesick for the Alps! Majestic shot that captures the Alpine culture and history of this area. Great shot. Thanks for posting!

Very pretty indeed, but no Schwarze Wand in sight

The snow clad mountains on the horizon are Wasserkopf / Cima dell'Aqua (3135m) and Großer Fensterlekofel / Cima Finestra (3171m), both just left of center, and Große Windschar / Cima del Vento Grande (3041m) on the far, far right. Closer by, also on the right, the grey mountain has two named summits, Putzernock (2566m) and Achternock (2667). I don't know any Italian names for the last two.

The Schwarze Wand is hidden behind the nearby forested slopes on the far left, which are part of (a subsidiary of) Schneebige Nock / Monte Nevoso (3358m). If that slope would not be there or if the picture had been taken from a little more to the southwest, Schwarze Wand would have been visible, but being 30 m lower than the Wasserkopf and a bit further away, it wouldn't have looked impressive at all.

Still, it's a fine picture. Not having the Schwarze Wand in it doesn't diminish it at all.

Re: Very pretty indeed, but no Schwarze Wand in sight

Thank you very much for the correction!!