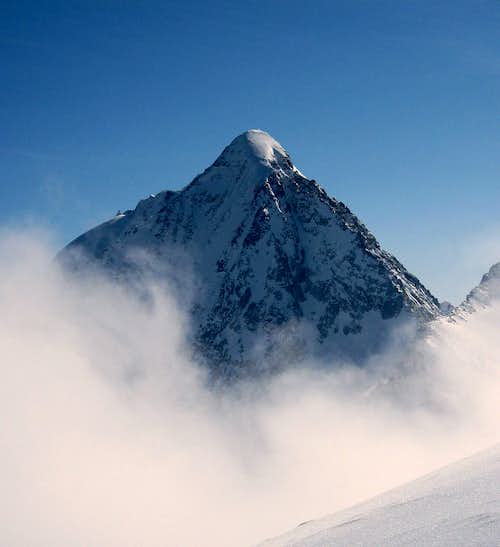 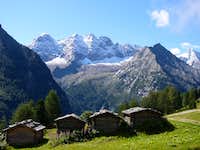 Rieserferner Group is a special one. It lies off the main range of European Alps, but has all characteristics shown in other groups of the Central Alps such as Zillertal, Venediger, Glockner etc. Even its altitude is not much lower. Hochgall/Collalto for example reaches 3436 m. Classified into bigger groups of Alps it belongs to Hohe Tauern, although many mountaineers don't perceive it as a typical Tauern. So, for general orientation see the general Hohe Tauern page. Summits of Rieserferner group rise high above valleys. Beautiful is view of Wildgall/Collaspro and Hochgall/Collalto, rising 1800m above the Antholz/Anterselva valley. On northern sides summits have also considerable glacier areas. They are retreating, but still a typical picture of Hochgall/Collalto from the village of Rain shows a wild, high mountain, covered with shining glaciers. The highest mountain, Hochgall/Collalto, was first climbed in 1854 by Hermann von Acken.

On the south, Rieserferner group reaches the valley of Rienz river, its popular name is Pustertal / Val Pusteria. Main town there is Bruneck / Brunico, 835 m. Beyond Pustertal sharp Dolomites mountains offer a great panorama from Rieserferner group. On SE Antholzer tal / Anterselva divides Rieserferner group from Villgraten group. Antholzer tal is broad, sunny, with many tourist facilities, especially around the beautiful Antholzer See / Lago d'Anterselva (on 1641 m). In this region every year also world cup races in cross-country skiing and biathlon are held. The road, which leads through the valley reaches on 2050 m Staller Sattel / Passo Stalle after which it turns down on Austrian side, soon reaching the long Defereggental. Defereggental is the valley, which forms the NW border of the group. The upper part of Deferegger valley is called Arvental. On the north, Rieserferner group reaches Venediger group on Klammljoch/Passo di Gola, 2288 m. Through Arvental on Klammljoch a narrow road goes, but it is closed for public traffic. So, it is an idel road for mountain biking! From Klammljoch a sunny Knuttental descends down to the picturesque village of Rain / Riva di Tures, 1596m. From here down to Sand in Taufers / Campo Tures (in Ahrntal/Valle Aurina) the valley is named Raintal / Valle di Riva. The strong creek Rainbach forms in the lower part of the valley many beautiful wild waterfalls. Finally, from Sand in Taufers to Bruneck the western border of the group is Ahrntal / Valle Aurina. So, on the north of the group, on Klammljoch, 2294 m, the main ridge gradually rises to the first 3000-er. That is Dreieck Spitze / Triangolo di Riva, 3031 m, which is a nice mountaineering goal and also a marked route reaches it from the west. From it the crest turns a bit towards the southeast and over many rarely visited summits rises on the summit of Lenkstein / Sasso Lungo, 3237 m, which is also an attractive mountaineering goal. On it the ridge again turns southwestwards and so detours the high Ursprungtal valley, lying west of it. Hochgall / Collalto, 3436 m, rises on the junction of main ridge and a strong side branch which from near the main summit deters towards the east. In it there are first a few summits named Ohrenspitze/Orecchio, 3101 m, and then the popular Almerhorn, 2985 m, on which a relatively short ascent from Staller Sattel / Passo Stalle, 2050 m, comes. The tour on Hochgall itself is one of the most beautiful ones in the group, but requires easy climbing, UIAA degree II. One approach goes by the northwest ridge, another, slightly harder one, comes from the east, over Patscher Kees, where one first has to overcome a steep couloir (in spring even appropriate for skiing), and finally also a notch before the main summit. South of Hochgall there is a sharp cut Schwarze Scharte / Bocchetta Nera (notch), 2981 m, over which from Antholzer Tal a demanding passage goes towards the north. Beyond the notch the sharp Wildgall / Collaspro, 3273 m, rises. Also this one can be ascended only by climbing (not difficult one). On that summit the main crest already turns towards the west and becomes despite its high altitude less demanding. It is actually more or less only the upper edge of a broad glaciated area and its summits are in spring nice goals of tour skiing. The central summit there is Magerstein / Sasso Magro, 3273 m, and soon after it the ridge branches. One branch goes towards the northwest, on a self-standing majestic pyramid of Schneebige Nock, 3358 m, while the other branch descends towards the southwest on Gemsbichljoch / Forcella di Valfredda, 2790 m, over which an important passage goes. Beyond that saddle the crest runs far towards the west. In it there is a series of nice, but very rarely visited summits. Not much is spoken or written about them. Many of them still exceed 3000 m but marked paths avoid them completely. 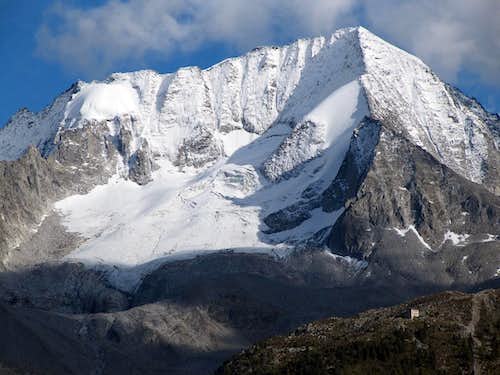 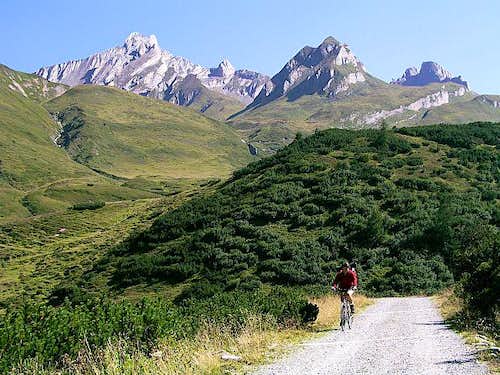 From the mountaineering standpoint Rieserferner group offers many possibilities. By its nature on the first place are high tours on mountains, partially covered by glaciers. Approaches to other summits avoid glaciers so the area is also nice for usual hiking. In winter and spring many summits are appropriate for tour skiing. Finally there are some nice mountain bike possibilities, the best biking tour probably being the one which encircles the whole group.

For general orientation see the general Hohe Tauern page. Rieserferner mountains can be reached: 1. From Austrian side, from Isel valley. In Huben turn west and drive through Defereggental. 2. From Italian side. In Rienz valley (Pustertal) turn north and drive either into Ahrntal and further into Raintal or in Antholzer tal. 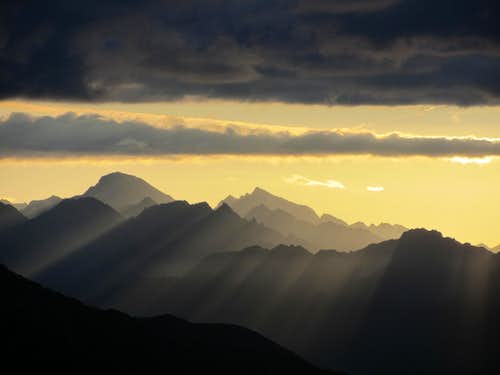 There are no limitations for reaching summits. For some roads toll should be paid:

On Austrian and Italian side there are two natural parcs:

Wild camping is not allowed, but on the Italian side high alpine bivouacs are, on the Austrian side only in emergencies.

Five days in the Rieserferner Group

Early 2014, an article appeared in DAV Panorama, the magazine of the large German Alpine Club, featuring a 5 stage trip in the Rieserferner Group (in German). I found out about this when I visited the area in the summer of the same year, because the article brought a lot more people than usual, and they were talking about it. Especially the Barmer Hütte was crowded, something that was apparently unheard of in previous years. Here is a summary. 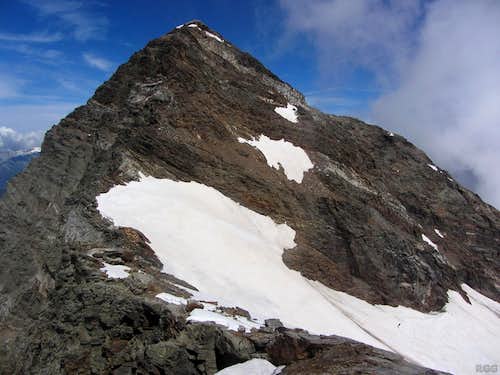 The top of Schneebiger Nock (3358m). Aided by chains, scrambling up here is UIAA grade II

Stage 1: Antholzer See to the Rieserferner Hütte. From there a possible side trip to Schwarze Wand (3105m) and back.

Stage 3: Climb Hochgall (3436m) by the NW ridge and back to the Kasseler Hütte.

Stage 4: Climb Lenkstein (3236m) and descend to the Barmer Hütte.

The site of the DAV has a more detailed description (in German).

On my own trip to the area, the first place I stayed was the Kasseler Hütte. I read the article right there, and discovered that my own plans coincided to some extent with the route described. It was very well written, great promotion for the area and for the trip. And the Große Ohrenspitze was described as a side trip on the last stage. Unfortunately, the article downplayed the seriousness of some of the routes, giving the impression that all of it would be suitable for hikers. It is not. 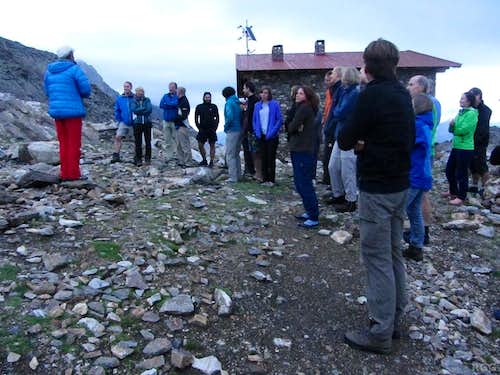 After dinner, the hut warden at the Rieserferner Hütte speaks

Fortunately, the hut wardens in the area knew this, and took great care to inform people about the routes and the conditions. To be honest, the article does have the important details about the difficulties, but they are easily overlooked - especially if you're don't know the meaning of climbing grades, which I presume applies to most hikers. On the last night of my trip, I stayed at the Rieserferner Hütte. That's the starting point of the second stage, first ascending Magerstein and then traversing Schneebiger Nock down to the Kasseler Hütte. The evening before, after dinner, the hut warden invited everybody to join him outside for a talk, where he gave a clear and detailed explanation of the route and its risks. Back inside, he checked with everyone who had any doubts. Almost everyone then wisely decided to skip Schneebiger Nock and take the easier route down from Magerstein directly to the next hut. I was impressed by his efforts to keep everybody safe. As it happened, less than a week before I had traversed both Magerstein and Schneebiger Nock as a day trip from the Kasseler Hütte, so I knew the route and the current conditions very well. Though possible without crampons, it would be a bit tricky, and there was some (very short but exposed) climbing to be done on Schneebiger Nock, secured with chains but still UIAA grade II. Easy for a climber but a lot to ask for most hikers. As if that wasn't enough, the 3rd stage, the normal route to Hochgall from the Kasseler Hütte is not just a hike with a short bit of climbing. It's an alpine route with a whole lot of it, UIAA grade II. Still, the area is beautiful. You can take the trip as a starting point and tailor it to your own experience. Bring the right gear: depending on the conditions, crampons might be useful or even necessary for Magerstein and Schneebiger Nock (and perhaps Hochgall too), and I guess that many will want to bring a rope when climbing Hochgall. 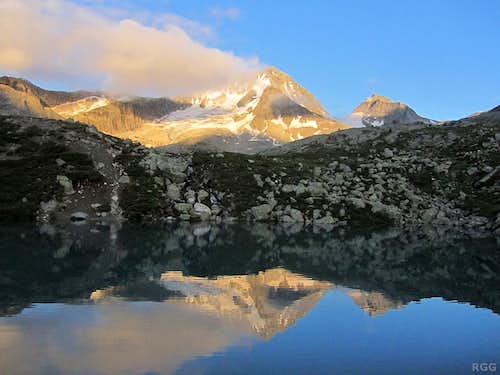 A More Remote History of This Page

I finally managed to find out the coordinates of Hochgall and inserted them on my page. But you have almost the same coordinates for this group page. IMHO it is better to delete them because it causes confusion.

OK, I deleted them.