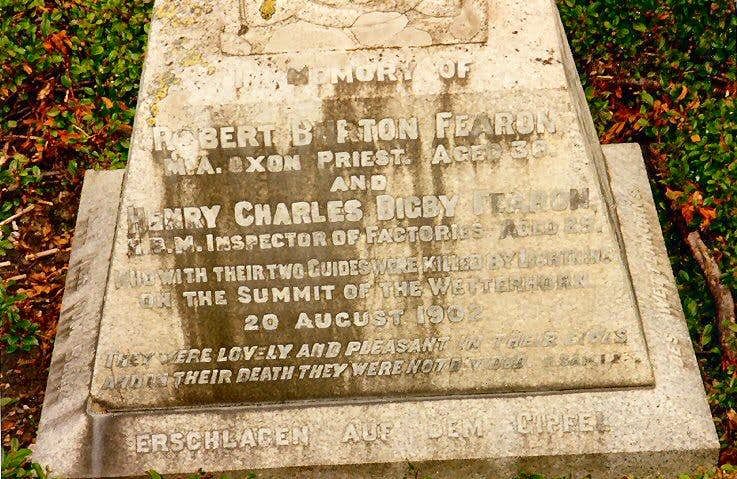 Grindelwald cemetery The text reads: IN MEMORY OF ROBERT BURTON FEARON, AGE 36 AND HENRY CHARLES DIGBY FEARON, AGE 29. WHO WITH THEIR TWO GUIDES WERE KILLED BY LIGHTNING ON THE SUMMIT OF THE WETTERHORN. The two Irish brothers Robert and Henry Fearon did on August 20, 1902 reach the summit of Wetterhorn. They were accompanied by the two guides Samuel Brawand and Fritz Bohren. Thunder and lightning was observed from the village. The four men did not return the same evening but nobody wanted to believe the worst. Two days later the horrible truth was revealed when Robert Fearon and Samuel Brawand were found dead and severely burned on the summit. The steel in Bravands ice axe had melted. It was not until Mars 22 the bodies of two other men were found in a crevasse on the Krinnen glacier. More reading: Rubi, Rudolf: Im Tal von Grindelwald, Band II, Verlag Sutter Druck, Grindelwald, 1986.
« PREV NEXT »