Single-pitch routes typically don't really deserve their own route pages, but this route is not in area guidebooks or on other climbing sites, and so I am trying to put out some information on it.

Suitable as either a trad or a toprope climb, this one is right next to the very popular Romeo's Ladder route. In fact part of it passes directly benefit the latter climb, so if people are on it, just stay out of the way.

Unfortunately, this is not a quality route. There are three principal reasons:

Still, this route might be worth doing with kids or beginners or for trad practice. I've scrambled the route several times and led it once; when I led it, I used only passive pro (set of stoppers and hexes) and was able to find three decent placements.

If you toprope the route, consider setting a long anchor that extends below the thorny finish. If leading, consider doing the same so you can just clip into the anchor and then reset the rope for a rappel. 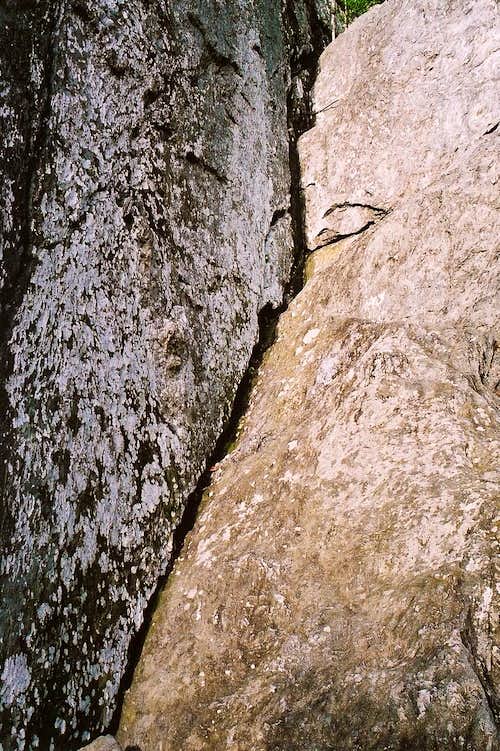 From the western part of I-495, a piece of the Capital Beltway, take Exit 44 for Route 193, Georgetown Pike; this is the second exit south of the Maryland border. Drive west for a few miles until you see the well-signed road leading to Great Falls Park. Turn right and follow the road about a mile to the entrance station. There are two large parking lots after the entrance station, but take an immediate right instead and drive to the "lower lot," which is popular with climbers and kayakers and closer to the crags.

Hike to the River Trail, the last maintained trail before the river. After passing the Sandbox and Dihedrals access points, the trail drops down some wooden steps, makes a bridged stream crossing, and then climbs a set of wooden steps. At the top of the climb, the trail splits in three, with the River Trail heading right. Follow the River Trail across some wooden planks. Shortly after them, you will come to an eroded area that has a nice view of the upstream end of Seclusion (with the Seclusion route). It’s about 40 more yards to the top of that crag. Continue hiking until you see the Romeo's Ladder route on an upstream-facing wall (see primary image). A crack/gully system here offers Class 4/low 5 downclimb options, but you can also hike a bit further downstream to much easier Class 3 access to the downstream end of the crag.

It should take around 15 minutes to hike from the parking area to the top of the Romeo's Ladder crag.

As mentioned before, I climbed this with a set of stoppers and hexes, placing only a few pieces. If you are toproping, trees above the crag make good natural anchors. Have at least 60' of static line to build a redundant anchor.