SARed in the Dead of Night

Turned around at sunset on Horse Mountain 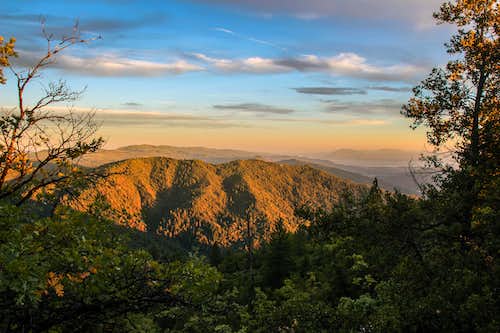 Elk Mtn. from Horse Mtn. at sunset
"Here we go! Finally getting some views here."
I had just come from what I thought was the summit of Horse Mountain 4,686' after a brief trip to the top of Elk Mountain 4,191' from roads that access these peaks. It appeared to be about an acre clearing surrounded by trees. Zero views. But on the way back I found a stretch of hillside that had pretty good views south towards Clear Lake. I lingered enjoying taking photos at leisure. The way back should only take half hour most down the trail I came up that met the fire road. It's getting on dusk and I go over to where I thought the trail came up. Figured It would be obvious. Couldn't find it. Since I didn't take the road I wasn't sure which way to go. It's getting real dusky now with less than 30 of useable light. Try to get my bearings. Had no map, it was all google earth memory. Basically poor prep. But it was really so easy getting up.
Decide to bushwack down a bit but get stonewalled by a thicket.

This is getting serious. It's only less than a mile to the van as the crow flies. Trudge back up to the road that appears to go down the west side of the mountain.  At this point I'm what the Forest Rangers call "turned around". The sense of direction is resting in a landscape of incomprehensible proportions due to falling darkness fueled by a misplaced sense of urgency that only adds to the confusion.  Adrenalin is pumping and I'm racing all over the place only to return to where I started. I called friends and tried to get them to go on a map and see if they could help me get down. It's so dark now I can't even see the fireroad I'm on after over an hour of wasted attempts. But I have a lighter and my cell phone. Wearing shorts, a tee shirt and a sweat shirt. No water or food. At over 4,500'. It will drop into the low 40's tonight. Hmm?

Hunkering down to tend the fire 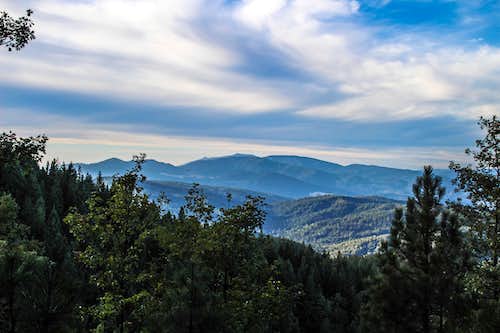 Sanhedrin Mtn. from Horse Mtn.
At this point it is stone cold dark and after 9PM.  A friend reminds me I can call the SAR folks! Called 911 and  with sketchy reception the lady got my cell coordinates to within 80 meters. I had stumbled apon a clearing and built a fire with some branches. At 11:30 the cell phone went dead. It was certainly quite chilly. My only occupation for the duration of the night was to keep feeding this fire to stay warm and wait and see if anyone responded.

Smoke gets in your eyes 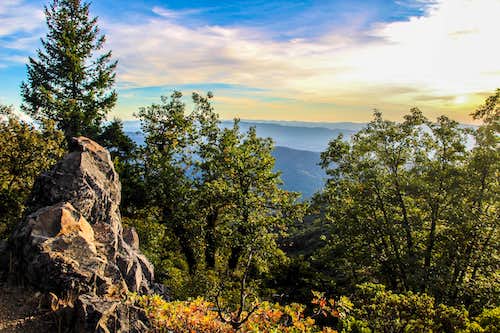 West sunset from Horse Mtn.
I keep busting up sticks and dragging branches into the center of my little blazing shrine to human comfort and well being. Had to be careful with the fire because of the droughts effect on the forests.
Checking the clock as the hours roll by. Over and over the damn smoke would blow in my eyes.

It's 2:30 now....
Did I hear something out here at this hour besides the breeze?!
Headlights from 2 ATVs come chugging into view.
I was under the distinct impression they were not there to set up camp.

MP of the night! 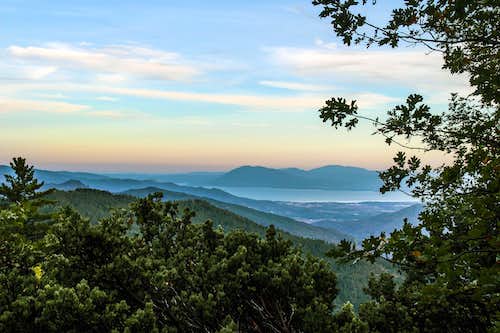 South from Horse Mountain
They give some water a pair of gloves and a pull over cap.
Solid dudes.
i get on the back of one of the ATVs and we promptly get lost at a wrong turn.

Not to worry, with walkie talkies, GPS and a cast of 20, that's right, 20 Volunteer Search and Rescue folks were all out in the dead of night just to rescue lil' ole' me the "Missing Person" (or MP as I was referred to). This is a great bunch of men and women who get their kicks saving boneheads like me in the wee hours of the morning on big old forested mountains up in the Mendocino National Forest. Not only did they rescue a pup looking at hard time til' dawn but they gave me 6 gallons of gas since it was 4 AM and no gas stations open.

Finally get to turn in in my own bed at 6 AM this morning. Could only sleep a couple hours. It goes without saying that if I didn't have that lighter and the cell phone...!
btw- Spent some time on Google Earth again today and even then I'm not altogether sure where it went south!

View SARed in the Dead of Night Image Gallery - 13 Images

Thanks splattski! Good to hear from you.

Thanks for sharing it. Your situation sounds a lot like what I went through on Chicoma Mountain in 2007. What should have been an easy hike turned into an all-nighter because I got panicky and amped on adrenaline.

I've been on both sides: as a member of SAR and as someone needing their assistance. We empathize with those who called us out, but until you have been truly lost yourself, it's difficult to convey what it feels like to be lost, not just off-route.

I learned never to be complacent. It can happen to experienced individuals too.

Thanks surg! Haven't finished your story yet but it's good to hear from someone who has been in such a predicament.

Thats a common refrain while lost.

I don't recall the acronym to self rescue, but the first word was STOP. Stop and think. Stop and ascertain your situation. Stop and ponder. Stop and don't panic.

A hiker acquaintance I once knew actually had the acronym labeled on his gear to remind him to STOP. Panic is the enemy.

As a SAR volunteer, you probably know the full acronym.

Glad you okay Noon! Hiking in foresty areas is a different animal compared to high mountains; there is no visibility. Great story to tell. You have to be nice to SAR now. Boy, Oregon folks busted my nuts when I wrote about not having an ice axe on Mt Hood. You better hope they don't read your report: they'll tell you things. Next time buy a smart phone. Even if you don't get reception you are still able to tell your location and see the roads.

Thanks Diesel, glad you like it. Yes I will be more prepared in hikes.

Actually, phones are not the answer.

First, they can't always catch a cell tower.
Second, they aren't always charged up.
Thirdly, its common for folks to use the flashlight in the dark and drain the phone battery.
Fourth, they easily break upon falling.

The answer is always having a map/compass which are considered by all experts to be the primary means of navigation. GPS receivers are actually secondary for the same reasons as phones. And knowing where you are at all times via that map and compass.

Finally, retreating the route is the most often recommended action. Not pushing forward into unknown terrain where you might end up cliffed out.

A very rewarding, educational, entertaining book that was written by a retired national park service ranger is the minimum training every high school kid should be given. The soccer and basketball can wait. Training in how to survive outdoors alone is far more important. "Over The Edge: Death in Yosemite" and its companion volume, "Over the Edge: Death in Grand Canyon." Both are actual case files of fatalities in those public parks and what the victims did wrong. Both are written with each case file in two or three brief but fascinating pages.

By learning what other victims did wrong, you'll be less likely to repeat their mistakes. Like the one case of the fellow and his girlfriend who hiked in Yosemite to view the full moon rise (well, and whatever else they did). But they didn't bring a light of any kind. After dark, while trying to hike down, both fell to their deaths. A simple mistake of not having the 10 essentials.

Most incidents in the wild happen to the day hiker ... because day hikers are the ones usually not expecting trouble and the ones thus without the 10 essentials. Backpackers have their gear and are mentally prepared to be out overnight and thus have fewer emergency incidents.

glad your trip turned out OK in the end.

I'm still old school and rely on a map and compass, these always give you the big picture of the area and using bearings and contours can normally get you back to a known point.

It's the same over the pond with the Mountain Rescue teams, all are volunteers and likeminded to those who get lost or injured in the hills, so they are pleased to turn out and find any lost souls (there for the grace of god etc etc.).

Knowing where one is via a map / compass in hand is the best bet to avoid getting into trouble.

I recently hiked a local park that I used to hike in routinely but hadn't for years. I took a map of the park just to avoid any problems. Turned out, I did indeed have memory loss. The map wasn't needed to save myself ... but it kept me from having to walk extra miles when I reached junctions where I wasn't certain which way to go.

Did you ask if they'd mind waiting a couple hours so you could get a nice sunrise photo?

I missed this one. I was up in that area today and managed to get stuck 10 miles out at 4,200'. The van sliding down the slope rim deep. But I got out. hehe
Be a trip report soon.

Or a group photo with Noon in the center and the SAR boys to each side.

A Refill of Lemonade

Your misfortune is our entertainment!

Re: A Refill of Lemonade

Mine as well, only after the fact!

Well, we all make mistakes, eh?

I just recently told someone that I'd rather sit back against a tree and wait till morning rather than have a noisy helicopter come looking for me and have myself end up on the news as the bonehead who got lost 1 mile from the pavement. She asked if I'd say the same thing given the threat of mountain lions... and I said, "Uh, yes." And, yes, mountain lions are a threat despite the wanna-be experts of our time claiming otherwise. They're not house kitties. And once attacked, a human doesn't often succeed in escape. One man did manage to fight off an attack in WA state a few years ago but only after losing one of his eyes in the fight. And he was using his knife.

Getting lost happens more often than not to the inexperienced in the SF Bay Area. We read of people about once a year doing that. Well, you're more experienced than me. I mean the stories of those who get into similar situations in Annadel Park with the residences of Santa Rosa all around them.

But the cool of night and your lack of water made it important to get out.

Thanks for all the comments Dayhiker. Lots of good info. Maybe you should do an article for SP about being prepared if lost.
Cheers, Windsor