Single-pitch routes typically don't really deserve their own route pages, but this route is not in area guidebooks or on other climbing sites, and so I am trying to put out some information on it.

My main purpose in posting this, though, is to point out the trad potential since there is not a lot of it at Great Falls.

It's not a great trad route, or even a good one, mind you. Really, it's downright weak. I only placed two pieces up at the very top, and those were just for practice. But still, it's there.

The start of the route is just a Class 3 scramble and then turns to Class 4. Sometimes leaves fill this gully, and sometimes it is bare, but it is going to be slippery nonetheless because the rock here has been polished by the river for millions of years. 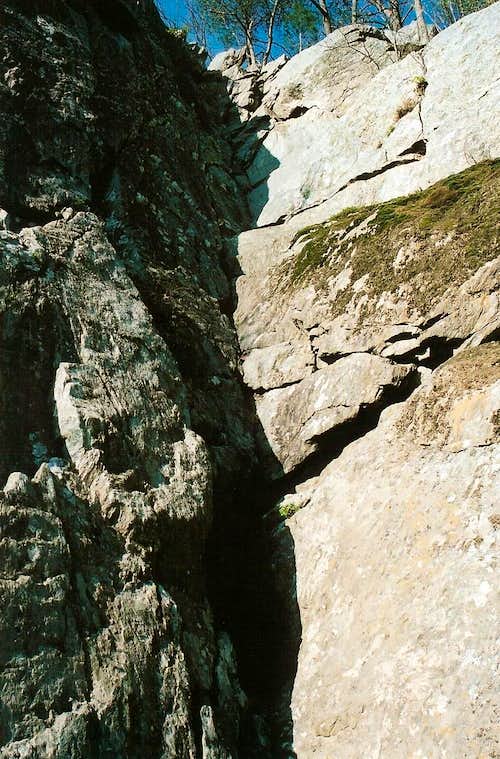 From the western part of I-495, a piece of the Capital Beltway, take Exit 44 for Route 193, Georgetown Pike; this is the second exit south of the Maryland border. Drive west for a few miles until you see the well-signed road leading to Great Falls Park. Turn right and follow the road about a mile to the entrance station. There are two large parking lots after the entrance station, but you should make an immediate right instead and go into the "lower lot" popular with climbers and kayakers.

Hike to the River Trail, which is the last maintained trail before the river. After passing the Sandbox and Dihedrals access points, the trail drops down some wooden steps, makes a bridged stream crossing, and then climbs a set of wooden steps. At the top of the climb, the trail splits in three, with the River Trail heading right. Follow the River Trail across some wooden planks. Shortly after them, you will come to an eroded area that has a nice view of the upstream end of Seclusion (with the Seclusion route). It’s about 40 more yards to the top of the crag.

Relatively easy Class 3/4 descents are possible from either end of the crag. An even easier approach is a bit farther downstream at the downstream end of the Romeo’s Ladder crag.

It should take about 15 minutes to hike from the parking area to the top of Seclusion.

Stoppers, hexes, and small cams for the places up top that will take gear. As already noted, most of the climb is not steep enough to warrant pro or even rope unless you're out to practice on safe ground, in which case the crack is huge and you'll want large gear.