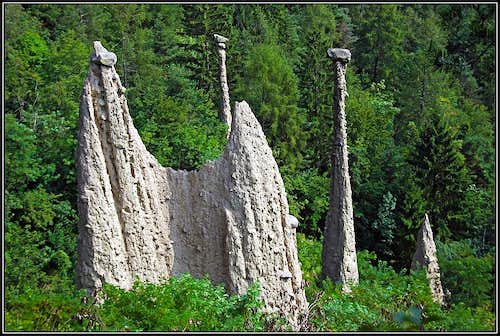 Twins
Earth pyramids are an interesting and beautiful geological phaenomenon. They are made by erosion of conglomerate. When thick layers of sedimental rocks, originated by glacial moraines some 50000 years ago get exposed to rain and wind, soft materials is in time washed away, while more hard parts remain. So, you can see pillars of conglomerate, still resisting erosion. The most interesting phaenomenon are big rocks of solid material on top of those pillars. Some of them are tens of tons heavy, and yet the sharp needles and their rocky crowns remain in perfect balance. Actually, these harder rocks are protecting the conglomerate needles to be eroded, sheltering them from rain.

In the last earthquakes (1976) some pyramids of Segonzano were destroyed. Also when armies came around (for example during the WW1), soldiers were shooting with heavy guns to hit the sheltering rocks on pyramids. So, older local would testimony that in the past there were even more nice pyramids than today.

Cembra valley
Segonzano is a small, calm community in Trentino, in the valley of Cembra. A winding and narrow asphalted road is going by the valley from Trento towards the NE, finally reaching Predazzo, Moena and the valley of Fassa.

The pyramids are on the hill slopes just SE of Segonzano. Coming up the valley from Trento, you park in the valley, just before reaching the village. There's the entry into the natural parc, where you pay a small fee (3 EUR). A narrow road is going from Segonzano (and the nearby Stedro) also across the slope above the pyramids. From the parking place on that road you can descend by the marked path to the pyramids without paying a fee. 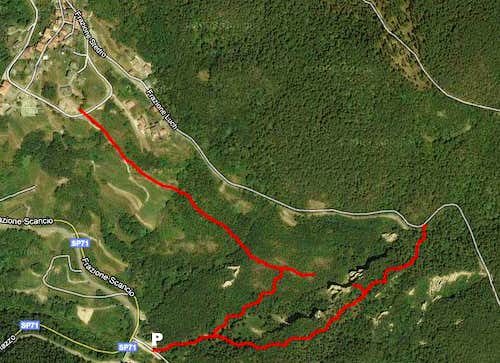 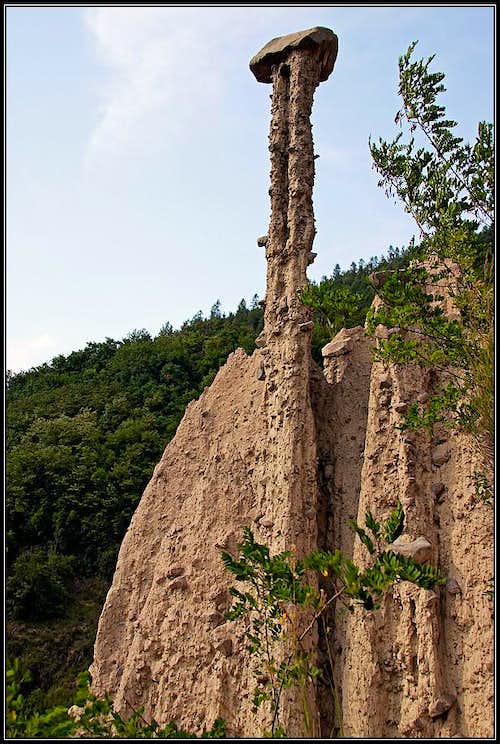 A fragile tower
Starting from below, from the entry into the parc (there you get also a sketch-map), you go by the marked path up the slope. Soon you are on the crossroads. The left path passes the group of pyramids #1. After you gain some altitude, the path branches. The right horizontal branch reaches a fine lookout point on the group #2. But from there, you can not continue to the other groups.

As going down on the first crossroads would mean losing quite some altitude, we went by the left horizontal branch - into the village and then above back again by the road and then descended to the area from top down. But that's a big detour.

The right branch (the first from below) visits the most beautiful areas of pyramids, so you may do only this part of the hike. Till the uppermost group you will do some 270 m of ascent, together with visiting lookout points it may take you an hour.