After a few searches, I have been unable to determine if the misspelling in the route's name is an error by the author of the Mountain Project page, an error by the FAist, or an intentional "mistake" by the FAist. I did find some evidence that sentinal is an alternative spelling of sentinel.
What's more important to know is that this is a multi-pitch trad route starting at the right end of the main ledge on Sandstone Buttress, the ledge from which most climbs on the formation originate. For a long time, this was a two-pitch route, but around 2004, someone added belay/rappel anchors to the tune of breaking the climb into four pitches, and that person added some bolts en route as well. "Bolted to death" is what some have called it. Not surprisingly, this shocked and pissed off a number of people, but the bolts are all still there.
I will describe the route in terms of four pitches based on the anchors, but know that this route can go in two pitches instead.
Note: When I climbed this route, I took a picture of each pitch. A few weeks later, my phone crashed and all files vanished. After getting my phone repaired, I downloaded my backed-up content, which should have included the pics of the pitches, but they apparently did not survive. Instead, you get a shot of the entire route, a view, and a stupid selfie. But that's three pictures more than the MP page has, and at least one of them is useful!
Don't let the grade fool you; if you are used to 5.7 on jugs or jam cracks but don't have much chimneying/stemming experience, you may really struggle on this one.

From downtown Lander, follow signs to Sinks Canyon State Park. It takes about 15 minutes to reach the park boundary.
Sandstone Buttress is the first large formation on the right after you cross into the state park. There is a large parking area, with trash cans and an interpretive sign about Sinks Canyon; right across the road is a group area with restrooms and an elephant kids like to climb on. You can't miss this unless you're blind or so absorbed by your phone that you might as well be.
If you have reached Sinks Canyon the other way, from WY 28, then note that Sandstone Buttress is the last formation on the left before you leave the state park. 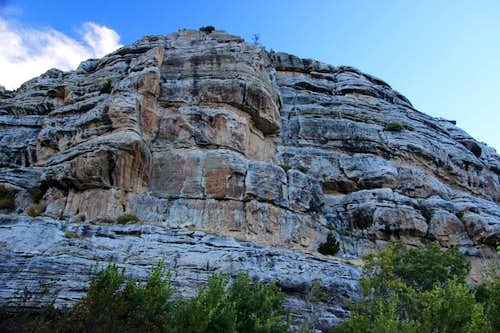 Sandstone Buttress-- the start of the route begins to the right of the view here. 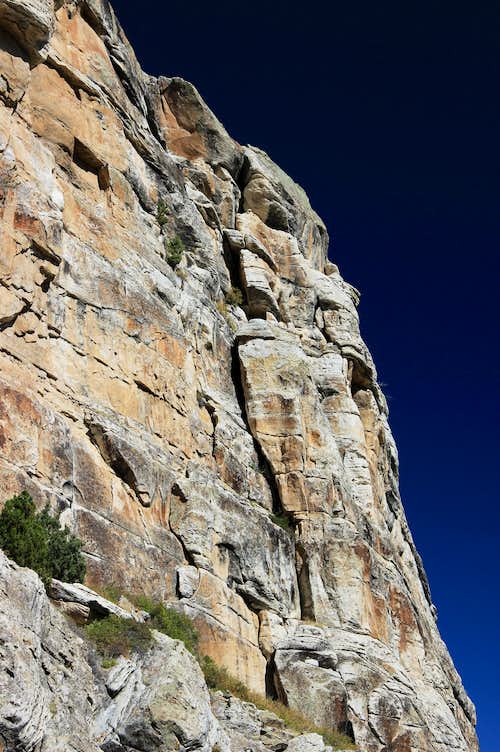 Sentinal Chimney (5.7)
Follow trails up to a ledge. Walk along the ledge past two 40' crack routes and then some bolted lines. The route starts at the right end of the ledge, where there is a huge, obvious chimney/crack system.
P1-- 5.6? Squeeze your way up a 15' chimney to a ledge, where there is a bolt. I did this route solo, first climbing each pitch, then rappelling, and then reclimbing it on a fixed line to clean the gear. I used the bolt here as my P1 anchor after scrambling up the initial chimney, as there were not good options for ground anchors at the actual start; this is FYI if you rope-solo this route. From the ledge with the bolt, go up a crack and dihedral to another ledge, where there are bolted anchors. This section also requires you to go through a bothersome bush.
P2-- 5.7. Climb up into the chimney and then reach another ledge with bolted anchors. There are two bolts in the chimney.
P3-- 5.7-5.9. I am not sure I climbed this one correctly. One bolt en route. The MP page says "From here, climb right into a small chimney, then traverse up and left towards the break in an overhand [sic]. Climb up between the overhand [sic] and the cliff wall at it's [sic] smallest point to another ledge." I went straight up the chimney (one bolt), and maybe it was my technique, but I found topping out onto the ledge a good deal harder than 5.7 and felt it was more like a 5.9 move. Note: from the anchors at the start, there is a nice-looking crack heading straight up. I climbed this on a fixed line after rappelling and cleaning the pitch, and although the crack was nice climbing, it led to an overhang with poor (sandy, sloping) holds above, and I ended up traversing back over to the chimney and finishing the way I did on lead. Looking at the photo of the route, I now think I see the line the MP author describes, and I was probably led astray by the bolts. Bolted anchors.
P4 5.3?-- Easy climbing with good pro up and left to bolted anchors.
Descent-- Easiest and safest, and most considerate if there is another party on the route, is to follow trails back down. However, you can make it down in two raps with one 60 rope.

Medium and large cams and/or hexes. I had up to a C4 #5 and could have placed a #6 if I'd brought it, but there are also sections that are too wide even for that.