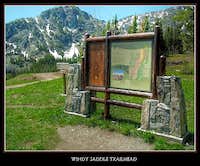 The original plan was to hike the Seven Devils Loop via the Windy Saddle Trailhead, following Boise Trail #101 until reaching Horse Heaven Saddle,(which junctions off to Seven Devils Trail #124 to Sheep Lake). From Sheep Lake, the climber's route would have been taken to shave off about 7 to 8 miles from the loop while allowing for a good night stay and hopefully some fishing. As with all my trips this year thus far, things really didn't pan out as planned. Long story short, we turned back on Saturday, but still ended up with approx. 25 miles hiked.

The trip started out bad with a horrible departure time. We didn't get on the trail until 1:00 in the afternoon, which overshot my proposed time by about 6 hours. Thankfully we were blessed with beautiful weather, at the optimal hiking temperatures (mid-70's). We traveled through McCall, then passed through New Meadows on the way up to Riggins. I had never been to Riggins, so all of the sites were new to me. (I enjoy these types of trips!) Once reaching the turnoff for the Seven Devils Campground, we drove 17 miles up a steep, bumpy road to the Windy Saddle Trailhead. Wow, what a view of the trailhead with a very ominous looking She-Devil overshadowing the area as if daring anyone to come into his realm. Very cool! 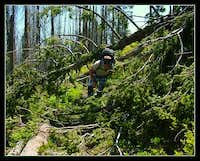 Dog Creek Marking
This trail starts off around 7600ft, then drops a good portion to about 6800ft a little passed the lower Guard Site. From here, the trail gradually climbs in elevation until reaching a saddle at Horse Heaven. Because we were hiking early in the year, the trail was not 'officially' open, therefore had not been maintained for this year's season. What a mess! We counted over 103 trees that we either had to climb under, or traverse over. I've never experienced this many downed trees on a trail, but can attest to the beating it takes on your legs/ankles/back while trying to be nimble with a 30+ lb. pack on.

We had numerous creek crossings which allowed for a lot of water. I was slightly concerned with finding water since this area is typically so dry, but we never had a problem. LOL, one crossing set the whole mood of the trip when I lost footing and took a nice digger in the creek, getting both feet and essentially the whole bottom half of my body. What can you do except laugh and keep going?!?!? :P The horrible part of the trip was the total lack of markings on the trail. There was a marking for Cannon Lake (1st Lake), and further up the trail Dog Lake (2nd Lake), but any lake after that was found by using the topo. Unfortunately my topo was a piece of crap and did not give accurate depictions of where things should be. 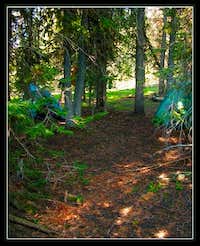 Hidden Campsite
After hiking for over 6 hours, we rounded a bend which had a talus slope. To me, it looked as if it was previously a creek bed, so I assumed it was Horse Heaven Lake. After climbing off trail for 15 minutes up a steep grade, we reached the lake .... And soon realized this was NOT the destination we had planned. In fact, it was Haas Lake which was .5 to 1 mile passed where we needed to climb. DISCOURAGED! Climbing back down, we trekked forward ... thinking our destination was near. Crossing a snowfield, we noticed a nice, fresh bear track. Yea, this made us a little more aware of our surroundings! No bear was spotted, but I almost soiled myself when an elk got spooked and jumped out of some brush beside me later up the trail. 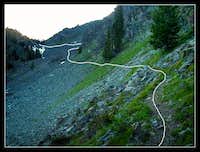 The turnaround point
Soon we rounded a bend in the trail, and we could see it followed the mountainside up another rock field, went behind a rock outcropping, then climbed over a saddle. Wha?!?! We totally overshot our Horse Heaven Lake and were now approaching Horse Heaven pass... Ugh, I was eager to get over the pass and find somewhere to camp, thinking it was that much less mileage we'd have to cover the following day. Unfortunately my two hiking buddies weren't so optimistic and I was outvoted to head back down and find an area to stay. By then, one guy was cramping extremely hard in his legs/calves and the other was dehydrated pretty good, so I agreed. We backtracked back down the ridge we were hiking up to find a flat spot to camp. Fortunately we had passed a nice little area at the beginning of the ridgeline with access to a small snowfield for water to melt. Later when camp was setup, we discussed to head back a day early and the task at hand was a little too much for some. Ugh! Oh well!

The evening was rather uneventful besides the huge buffet of food we cooked up to rid ourselves of some additional weight. Fresh Fried Rice, chicken breasts, mashed potatoes w/ bacon bits, soup, and other tidbits were the main course, and we ate like kings! Soon the night was upon us and conversation drifted among three friends over firelight. Those are sure good times, regardless if a 'task' is left uncompleted. The important part of the trip was actually happening, and that is what memories are made of. I was disappointed, however it did not overshadow the good time this ended up being. 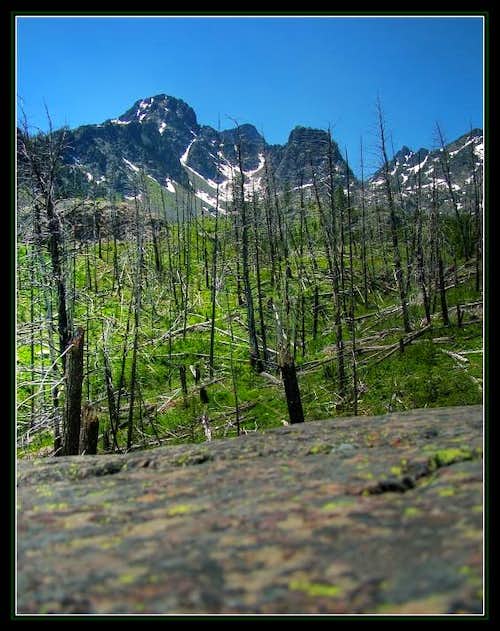 Indian Paintbrush
The next day we had a nice downhill traverse back to the trailhead. It was a beautiful day with hardly a cloud in the sky and nice temps. (Later in the day started getting warmer). Along the way we were greeted with spectacular views of Carbonate Hill and the surrounding peaks nearby. We chatted briefly how it would be fun to ski down even though I have never been skiing before.

We were out of water due to cooking breakfast earlier that morning, so we opted to stop at the 1st creek crossing that came upon us. In hindsight I would be willing to bet money this was the outlet of Horse Heaven Lake and we should have headed uphill from here. I'm hoping future trips will validate my claim. We filled up water at this point and took a small break to eat some snacks. Onward we continued....

Stopping at a small horse loading area passed Dog Creek, I was astounded by the view of the Seven Devils. The guys were feeling rather fatigued and needed a short break to moleskin their feet, so I opted to explore a little in the area. I found a nice, warm rock to lie on and took a cool macro of the peaks in the background while focused on my rock. Also in view were many wildflowers, which included the always beautiful Indian Paintbrush. :P

Departing from this area, we were shortly faced with the uphill grind back to the car. Steadily climbing, we finally reached the lower Guard station, which meant we still had around 800 ft of verticle left before we would reach the car. Here's where the funny part happened... (in hindsight at least).

One friend was cramping up pretty badly to where he was lagging behind us quite far. Once reaching the lower Guard site, we came up with an ingenous plan. Since there was a road that led to the station, we would drop our packs which would enable us to speed climb the remaining 800 ft to the parking lot. Then the two of us would drive back down and pick up the 'injured' third and we'd be on our way.... Right?? LOL...

"How much further?", I heard from behind me through gasping breaths...

"We're almost there man, just a little further", I replied, not knowing if I truthfully answered.

Finally the trail subsided and the parking lot was in view. The sense of accomplishment was upon us so strong that we even 'fist-bumped' after sitting in the car. We did it!!!

Now all we had to do was drive to the lower guard site and pick up our buddy and our packs. We hauled ass down to the road that connected to the guard site. 'OH NO!', the freakin road had a damn locked gate going across it. We both hopped out of the car to inspect the padlocks in hopes they were unlocked. No such luck. At that point I was actually having thoughts of ramming the car through the gate so we didn't have to hike up that 800ft again. GRRRR...

Walking back down the road, tails tucked in defeat, we could see our friend staring at us. I could tell from that great distance that he was hoping we were someone else, but upon arriving closer he knew. LOL, then the bitching started. We heard about how much he hurt on all parts of his body, we heard about how he had blisters on top of blisters (yea I thought it was funny too!), we heard about his little escapades of finding ticks all over him when he tried to lay down. After hearing his little rant, we threw the packs back on and started our (my 2nd) journey up this freakin hill. Thankfully we had moved the car to the gate, so at least we were walking along a steep road rather than a bunch of switchbacks on a trail. However, we were still wasted. My mind went to my 'happy place' while we motored up this hill with thoughts of a hot meal in Riggins occupying my mind.

Soon enough, we finally reached the car. And I was able to kick off my pack (once and for all). Overall, this was an excellent trip regardless of being unsuccessful.

If you are in Riggins, hit the bar of the right-side of the road (unsure of the actual name), and say hi to Rusty (old friend from Nampa) while ordering your double bacon cheesburger. The food totally made the trip worth it... although I doubt I can get these two guys to ever go out with me on an adventure again. 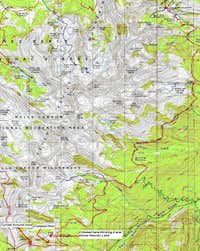 Our Map (the actual map file!)

Here's the route we took. We followed the red route. As you can see, we overshot our destination of Horse Heaven Lake by quite a ways... I spose this means I need to plan more trips in the area and claim what I had originally planned. After you see the map, you can really see why we had a little trouble determining where exactly we needed to be.

I would recommend you do this clockwise rather than counterclockwise. We arrived about the same time July 4th weekend. Left about 2 pm and camped at Dog Creek (7 miles), hiked to just south of Higgs Cow Camp the next day (14 miles) and then finished the third. If you have to drive a long ways, you pretty much need to figure 3 days, including drive there and back.

Since the simple mileage around is 27, it seems you should have been able to finish. If the loop is your main objective, then Sheep Lake, whether you use the climber's trail or not, should not be an objective.

Awesome advice which I'm probably going to try on the next go 'round. :P

My original reasoning was to do it clockwise so as to save the best scenery for last, then having the 'climber's route' from Sheep Lake to make the 3rd (last) day the easiest. Unfortunately I didn't get to test out my theory, but it was fun regardless.

Stay tuned on the report, I plan on adding more and formatting the pictures where they belong.