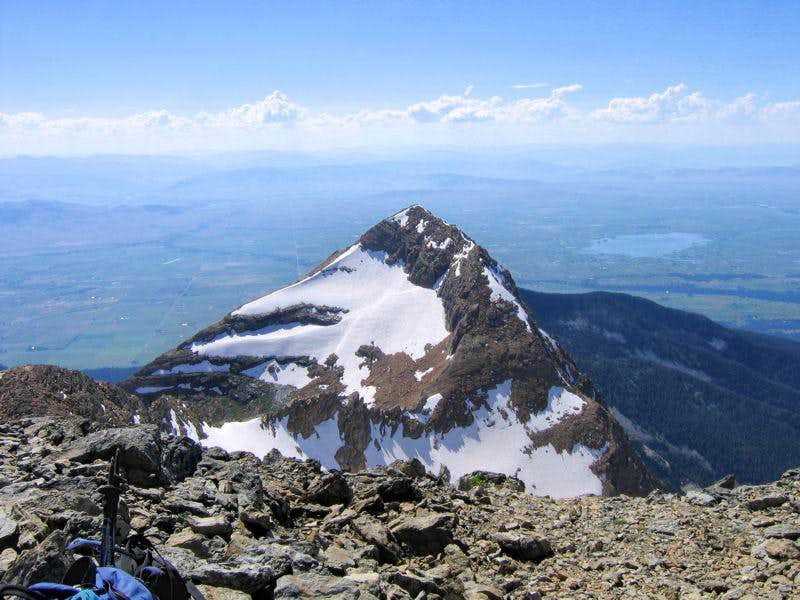 Looking directly west from McDonald Peak, over Sheepshead (also, "Sheep's Head") to the Mission Valley. "Sheepshead" does not appear to be an official designation (officially, it has the exciting name of "Peak 9417"), and is also sometimes referred to as "West McDonald Peak," which the USGS erroneously says is the small bump in the picture's lower left. "Sheepshead" does not appear on any map I've seen, but appears to have complete acceptance by anyone with whom I've conversed regarding the Missions.
Photo by Vernon, July 2, 2006.
« PREV NEXT »

Actually, the error is on the part of the USGS. The peak known as Sheepshead is what is also known locally as West McDonald. What the USGS has named is an insignificant little bump on the connecting ridge.

Neither Topozone nor the Trails Illustrated Montana Topo CD-ROM set have "Sheepshead" in their data bases. But they do, of course, have "West McDonald;" am I right that the erroneous "insignificant little bump" is shown at the lower left of the image above? And in other words—if I understand correctly—to locals, either designation applies to the picture's main subject, and is the relatively rounded summit to the front and right of McDonald when viewed from the Mission Valley? (Shown in the first picture on the page.)