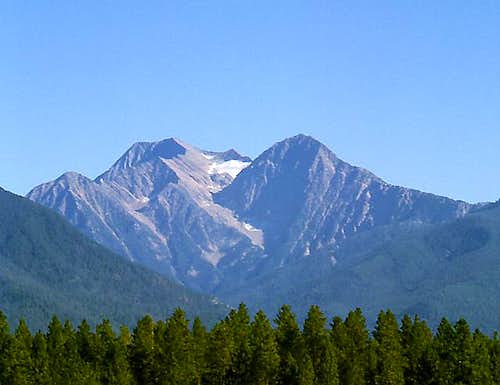 McDonald Peak (L) and Sheep's Head from the northwest. 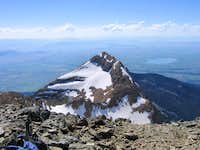 From the east
This prominent peak of the Missions with its wonderful west ridge and spectacular, possibly unclimbed north face deserves an official name. On the USGS topographic map it is unnamed peak 9,417 feet. It is commonly known locally as the Sheep's Head, Sheepshead, or West McDonald Peak.

At certain times of the year viewing from the northwest, people can see the outline of a ram's head in the north face and glacier, hence the name Sheepshead.

The peak is the logical owner of the name West McDonald that the USGS placed on the small point between McDonald Peak and Peak 9,417. Hal Kanzler labels it as West McDonald Peak on his 1963 recreation map of the Missions. This map by the well-known local climber was thoroughly researched and checked with the local populace as well as with other local climbers and hikers.

In any event, it is a beautiful peak and a worthy mountaineering objective that is too often overlooked and bypassed in favor of its higher neighbor to the east.


The shortest approach to the mountain is from the area of the Ashley Lake Trailhead on the west side of the range. From here, one can access the west ridge, or the saddle between 9,417 and McDonald Peak. See the approach information for the McDonald Peak route HERE for instructions on reaching the trailhead.

One can approach from the north via the McDonald Lake drainage, but this involves a steep arduous bushwhack.

Another possible approach would be over the top of McDonald Peak from the east.

Red Tape / When to Climb

This peak is on the Flathead Indian Reservation within the Tribal Mission Mountain Wilderness. A hiking permit is required. Permits can be purchased at most sporting goods stores in Western Montana, or through the Confederated Salish and Kootenai Tribal Recreation Department in Pablo, MT (Phone: (406) 675-2700). The permit is currently $15.00 per season expiring every year on the last day of February.

In addition, it is located within the Special Grizzly Bear Conservation Zone that is closed to all human access from July 15 to October 1 each year unless posted otherwise. Check ahead to be certain that the time has not been extended. 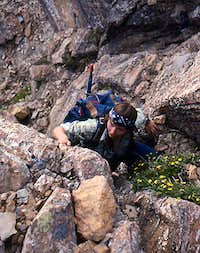 The West Ridge is the most obvious and probably the commonly climbed route on the mountain because of the relatively easy access from the west.

There used to be an abandoned trail leading from the road extending above the trailhead over point 6495 and nearly to the west ridge. Perhaps remnants of this trail remain, otherwise just head up through the brush.

Climbing on the upper ridge is Class 3 if care is taken to find the easiest way.

Neither of us have climbed this route. Fred knows of at least two parties who have traversed over 9,417 to McDonald Peak ascending the West Ridge then descending the East Ridge to gain the saddle between the two peak. They reversed their route in descent. The difficulty of the East Ridge is unknown to us. 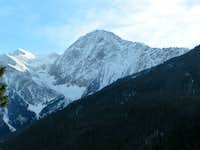 
Setting from the NW 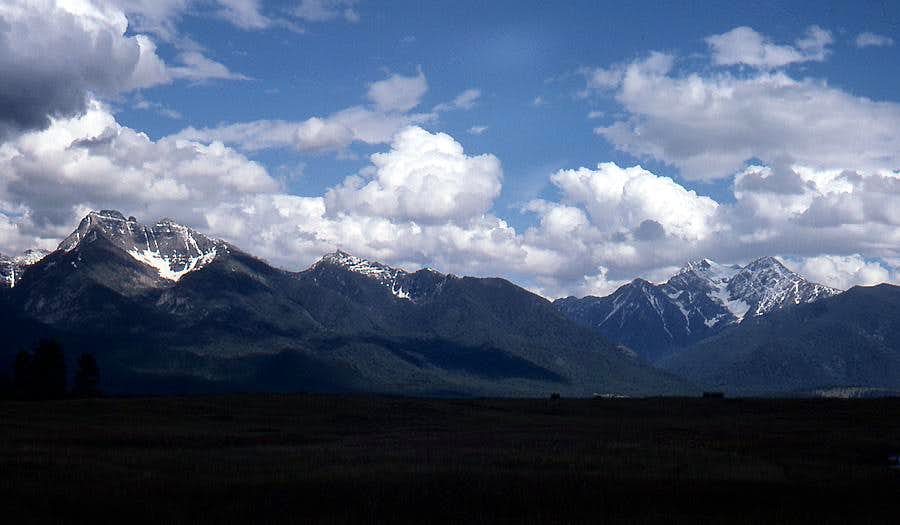