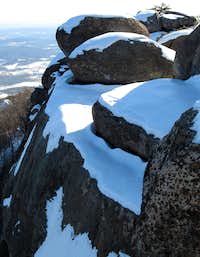 From the Ridge Trail

Skyline Wall, also known as PATC Wall (PATC is for Potomac Appalachian Trail Club) , is a north-facing climbing area a short distance east of the summit of Old Rag Mountain. Because it is right off the heavily used Ridge Trail and both its western and eastern access points are located next to major rock outcrops (both pictured on this page), it is an easy crag to find and hence is one of the most popular climbing crags on the mountain. Unlike just about every other climbing crag on Old Rag, Skyline Wall does not require bushwhacking to reach, which also explains its popularity. Popular is a relative term here, though; few non-climbers visit Skyline Wall, and the length of approach (plus the difficulty of approach for certain crags) keeps Old Rag's climbing areas from becoming anything close to crowded even though the trails on the mountain usually are.

Because the crag faces north, it receives little direct sunlight except in summer when the sun rises and sets in northeasterly and northwesterly positions, respectively. Skyline Wall is thus a nice place to climb in the warmer months, especially since the access routes to other good crags such as Sunset Walls, Reflector Oven, and God's Area are overgrown or at least very difficult to negotiate at those times. Those other areas are also lower and hotter, especially those that face east.

Skyline Wall is foremost a spot for rock climbing, but because it has such easy access, it makes a nice detour for scramblers on the Ridge Trail interested in seeing a part of the mountain they otherwise wouldn't. Because of the scrambling along the access routes, this detour is not for casual hikers; the scrambling is not much harder than anything along the Ridge Trail, but the pitches are longer and there is more exposure.

The crag has plenty of bouldering possibilities, too; play on the lower portions of the established routes or create your own little adventure.

The routes at Skyline Wall are granite ones (not too common in the region) and range from around 50' to 90', but most are in the 70-75' range, and they are single-pitch routes. There are a few bolted routes, but the majority are by far trad and toprope routes. The crag has several moderate routes, and many of them are gritty granite cracks.

I will not presume to say which are the best routes, but the 5.8 Dobie Gillis route, which is partially visible in this picture, is considered a crag classic.

This page will, in addition to providing overview information, describe how to find Skyline Wall and will photographically represent some of its routes and other features. It does not list and describe every route (there are more than 20). For detailed information about the routes, use Eric Horst’s Rock Climbing Virginia, West Virginia, and Maryland, the first chapter of which is devoted to the climbing on Old Rag, or visit the page for Skyline Wall on Mountain Project or on rockclimbing.com. If anyone who has extensive experience climbing here would like to take this page over or make additions concerning routes, please send me a PM. 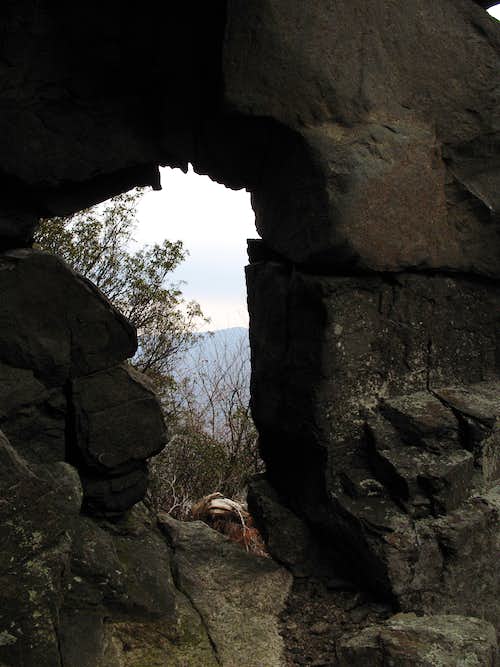 
Getting to Weakley Hollow

At Sperryville, located along U.S. 211/522 east of Shenandoah National Park and in the park's shadow, turn south onto US 522 where it splits from 211 and turn right onto Virginia 231 shortly afterwards. There is good signage for these intersections. You can also reach 231 via 522 from Culpeper, and you can take 231 all the way from Charlottesville.

A little over 8 miles from Sperryville, watch for the signed turn to Old Rag at Route 602. The road becomes Route 707 at an intersection (stay left on the south side of the river). At the next fork bear left again, now on Route 600. Follow this road for 4 miles to its end at the parking area, which accommodates 200 cars. Park here and walk 0.8 mi to the upper parking area at the end of SR 600. Trails begin here.

Update: As of August 2010, the upper lot is closed to vehicles and parking along the road to it is illegal. This is a permanent closure.


Getting to Berry Hollow

At Sperryville along U.S. 211, look for signs indicating 522 and 231 and follow the directions to them. Turn right on 231. You can also reach 231 via 522 from Culpeper, and you can take 231 all the way from Charlottesville. After about 10 miles along 231, you reach a tiny town called Etlan. Look on the east side of the road for a small convenience store. Directly across the road from the store is SR 643. There should be a sign indicating access to Whiteoak Canyon. Follow this road for about 4 miles until you reach a stop sign. Turn right (a sign for Whiteoak Canyon should confirm this). You are now on SR 600, and it takes you all the way to the signed parking area and trailhead, almost at the very end of the road. Instead of turning into the parking area, continue straight for about 0.8 mi to the end of the road, which is where the Berry Hollow Fire Road begins. It is about 5 miles from the junction of 643 and 600 to the trailhead, and the drive takes about 15-20 minutes. 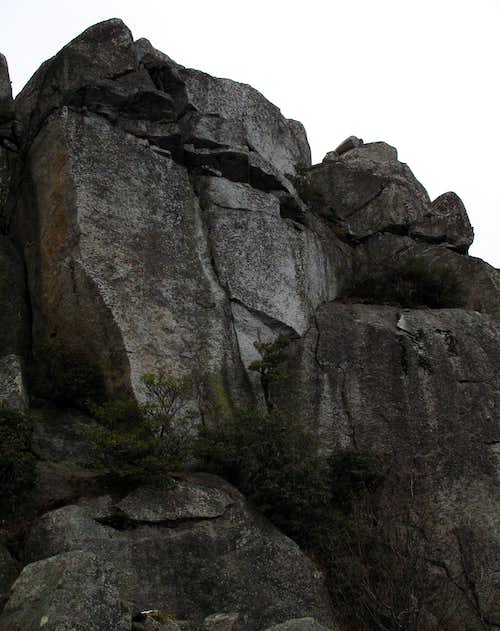 Western End
If approaching from Weakley Hollow, hike the Ridge Trail for about 2.5 mi to a huge egg-shaped boulder at the beginning of an open rocky area and look for a Class 3 gully descending to the north and to the base of Skyline Wall. It is almost impossible to miss this boulder, a picture of which is also on this page, but if you do, hike on to the summit (about 10-15 minutes away, turn around, head back, and look again).

If approaching from Berry Hollow, hike about 5 minutes east from the summit to an open area of slabs and boulders and look for a prominent boulder with a chimney-like opening at its base. Hike/scramble down here to reach the western end of the crag. A photograph of this boulder is included on this page, but if you miss the rock, hike on for a few more minutes to the "balanced egg," which is even easier to spot, and then descend as described above. If you can't find that rock, you're hopeless and should just go back to the climbing gym or your Krakauer collection.

Social trails traverse the base of the crag. They are generally easy to follow, but some occasional minor scrambling or bushwhacking may be required.

March through November, there is a per-person entry fee of $8; December through February, the fee is $5 (the maximum for family groups is $15 and $10, respectively. Payment is mostly on an honor system, but rangers do collect fees on weekends at Berry Hollow, and there is a fee station at the lower parking area in Weakley Hollow.

No pets allowed. Remember that as much as you love your dog, it is still considered a pet. People routinely violate this restriction; please don't join them.

Be prepared for poison ivy, and be wary of rattlesnakes.

If you are toproping, make sure none of your gear crosses the Ridge Trail. This is not only safe for you but also keeps you compliant with new "outcrop regulations" in Shenandoah.

Don't show up the night before and set up a tent at the TH or within sight of it. Rangers look for people doing this, and I have seen people ticketed for it. 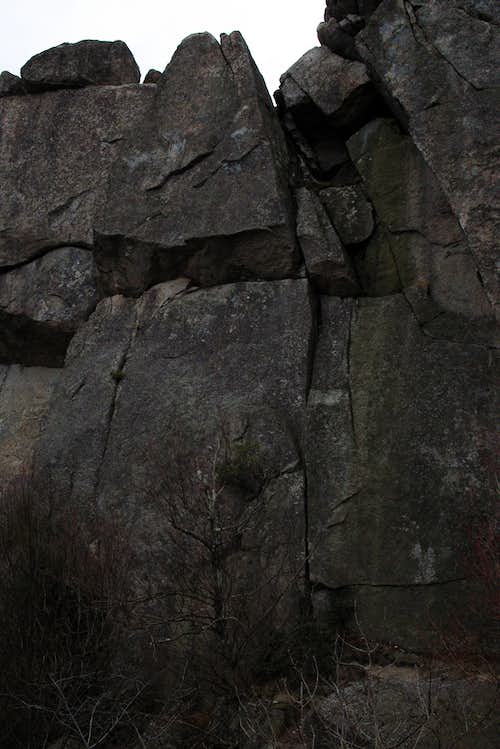