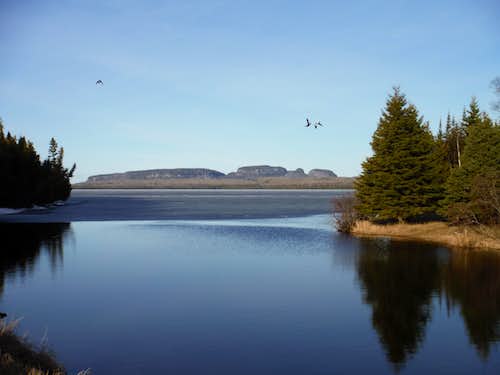 Sleeping Giant - Legs, Knees, Chest, Adam's Apple and Head from left to right.
A mountain I never heard of.  That no one I knew had heard of.  In a remote region I had never even thought of, on a peninsula on the north side of Lake Superior.  It was for discovering places like these that made Summitpost (what my daughter calls 'MountainBook') so addictive.  This mountain was cool.
But this wasn't just cool and remote, it was paradoxically somewhat accessible - less than 12 hours drive away from my Chicagoland home.  Hovering just out of reach for a desk-bound family man with 3 kids.   I could bring my tolerant families to National Park destinations that had more family options, but this was not something you could center a family a vacation on, I thought.  I bided my time...

About 5 years ago, with the kids all in college or high school, time started to become more available for me.   I started taking 3 and 4 day weekends to places I could reach by car: 3 Hours away (Wisconsin), 6 (Kentucky, Upper Peninsula of Michigan) and 8 (Minnesota).  But maps were amassed, plans made, for a Canadian journey.  An arctic blast of -20 degrees F canceled my first plan, probably fortunately, a snowshoe trip in January.  Then suddenly, with the end of April on a warmer el nino year, came a chance to strike out for Thunder Bay Ontario and Sleeping Giant.

As I prepared to leave, several sources mentioned that you could save a lot of hiking miles (8 total to be exact) if you biked 4 miles on the Kabeyun Trail to the trail that leads up up to the top of the Giant's 'Knees'.  So for an added twist to my weekend, I would for the first time bringing my bike on a trip.
My bike is not a mountain bike per se.  It is somewhat of a hybrid, with wider tires than a road bike, but not as wide as a mountain bike.  It was designed for the crushed limestone of the 100+ miles of rail-trails in the Chicago area.  In uber flat Illinois, I spend most of my outdoor time touring these superb trails.  They undoubtedly saved my sanity in Illinois.  But would it hold up on a real mountain?
Unloading from the car, I took my bike to the trailhead, and took a look down the trail.  I turned around to put the bike back... 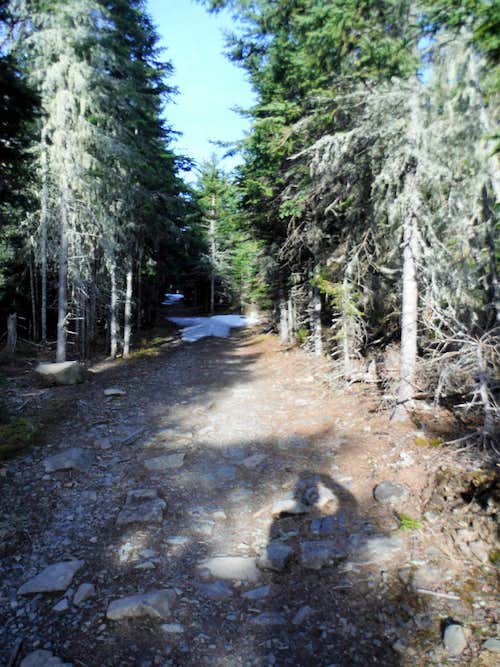 Kabeyun Trail - First Look
But then I reconsidered.  I had hauled it all the way from Chicago.  I would give it a go.  I could always just park it and walk the rest of the way in. 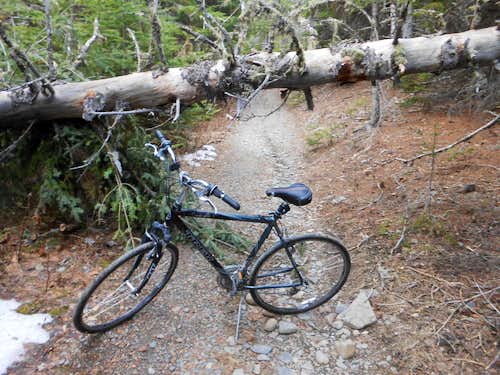 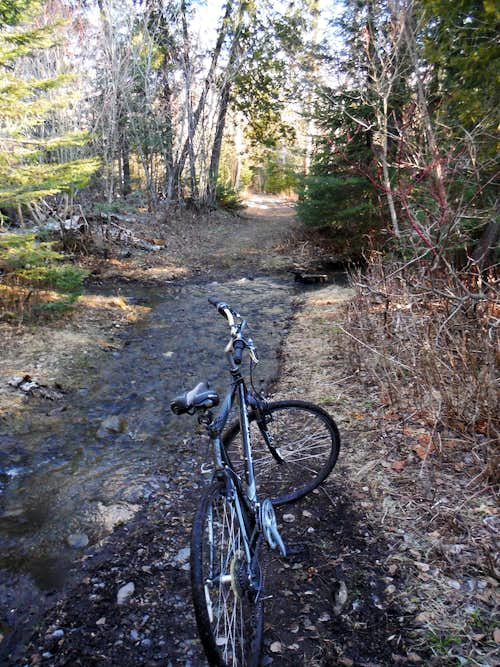 In Trail Stream
The Kabeyun Trail would probably laughed off by real Mountain Bikers.  It is wide and overall flatish with some slopes and rolling sections.  However, for a biker used to Chicago rail trails with their max 4 degree grade, I had a rollicking mixture of fun, sweat and occasional terror.   Rocky, Icy, Wet.  Downward slopes quickly carried me into rocks, mud or icy or slushy snow patches.  I had a close call trying to bike under a downed tree, with a branch almost ripping my backpack off me (and me off the bike) due to a stowed trekking pole.  Deadfall, quite common, also made me stop and lose all momentum, forcing me to manually push the bike up the next hill.  I was breathing quite heavily, borderline exhausted/exhilarated.  But boy those 4 miles went fast!
And sometimes the trail broke through to beautiful Lake Superior: 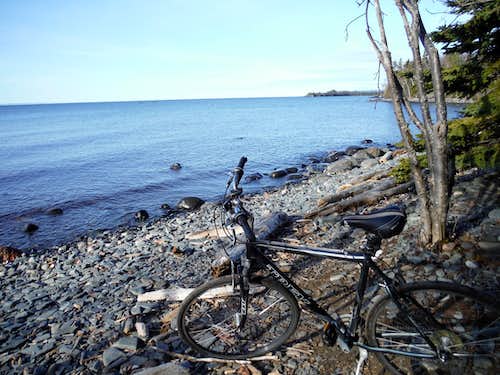 After 4 miles I was able to park my bike at the thoughtfully provided bike rack and begin going up the mountain.  I was fresh and loving the new skills I had been forced to learn the last 4 miles.
Already today I had seen a fox, several ducks, deer, and grouse.  And this guy: 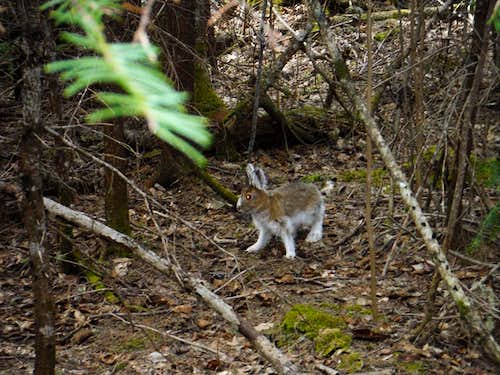 Beware of Rabbit
And the mountain I came for did not disappoint. 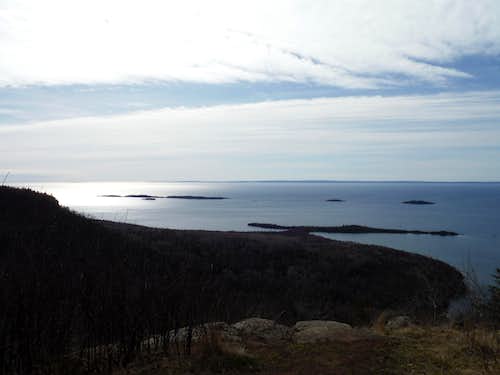 View of Tee Harbor, Halfway Up 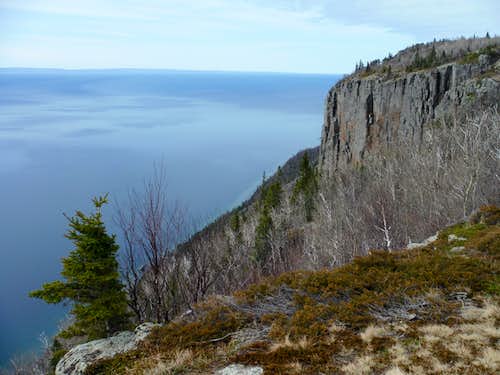 South East Side of Giant's Legs 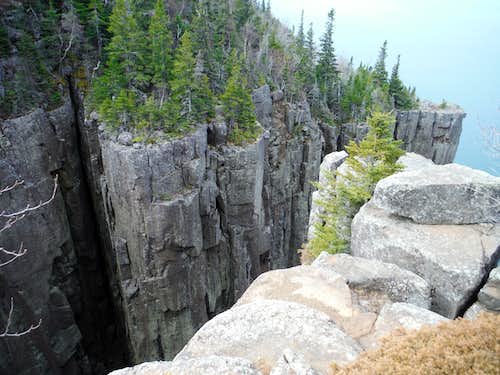 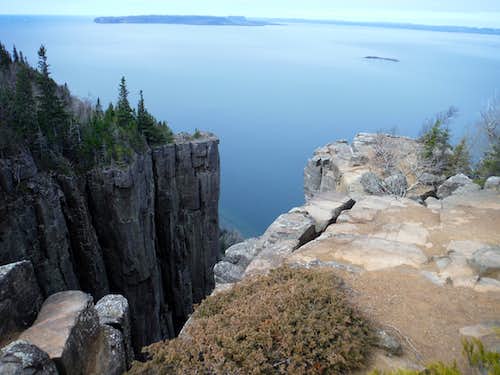 Mouth of Chimney Canyon
Older maps I had gotten hold of showed a trail, or at least a route, up Chimney canyon from further along the lake hugging Kabeyun trail.  Recent maps and park guides did not show it.  But I was not able to tell if it was still viable or not due to the snow.  Anyone who knows, please let me know!
Edit 5/25/2016: From another site:  "..but we were told by a ranger in the park office that the old trail (Chimney Trail), now well hidden, is crumbling and lethal, and the rangers will charge anyone caught trying to use it" 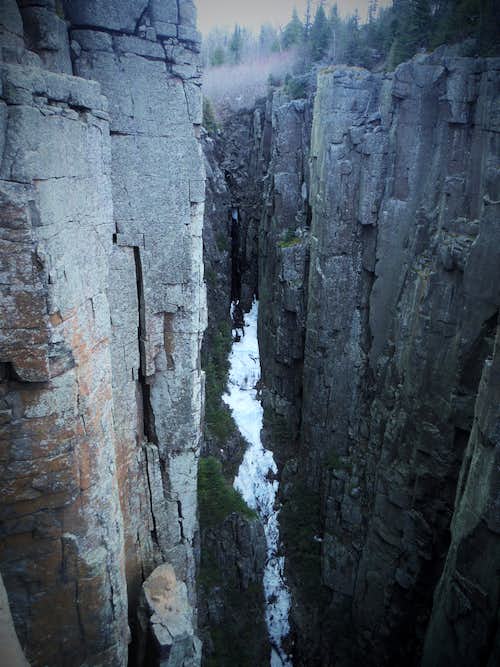 Chimney Canyon
The gaping maw of Chimney Canyon hanging over Thunder Bay made an indelible impression on me as I ate lunch and soaked in the views.  On a Friday between snow and summer, I had the mountain to myself.
My ride back was just as exhilarating, and on the way back I stopped and hiked a quarter mile to see the Sea Lion, a unique rock formation arching into a bay.  I have a soft spot for this beautiful monument, as I originally thought that it was the Sleeping Giant, when I first read the TLogan's  Sleeping Giant Page all those year's ago. 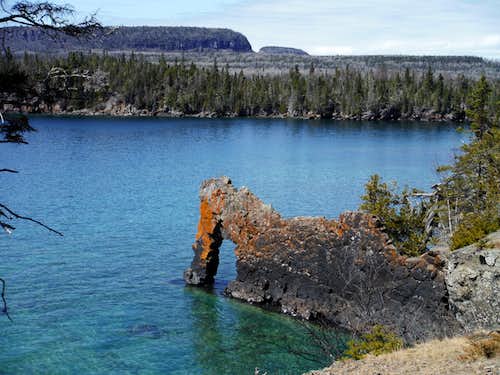 I took another 8 mile round trip bike ride on the Sawyer Bay trail the next day to hike up the the 'Chest' of the giant.  The bike portion was steeper, rockier and icier than the day before, and the views were restricted but still fine. 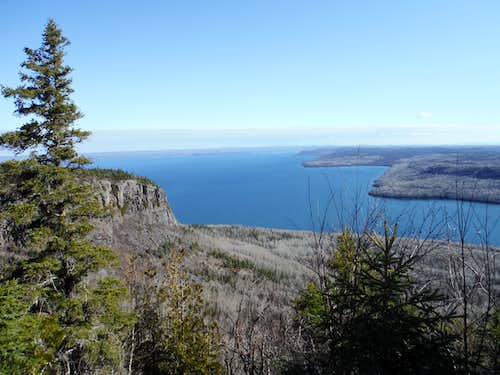 Looking North toward the Head
I will be back! 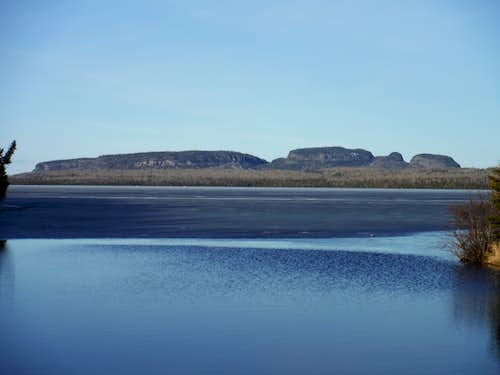 An enjoyable report about a surprisingly impressive mountain.

Thanks! It totally lived up to my high hopes. The whole park is huge, and it is National Park quality.