I have been enjoying snowshoeing for a couple of years now, enjoying how it extends the climbing and hiking year.  I have especially been enjoying snowshoeing in the Northwoods of the upper Midwest (Wisconsin, Michigan, and Minnesota).  In January this year I was able to head up to Minnesota's North Shore of Lake Superior.  I had picked a couple of objectives I thought would be good for my best friend Big Al, who was just starting out on showshoes and looking for an intro into the sport.  Unfortunately, his car was ambushed by an ice storm in Cleveland and he could not join me.  Fortunately, he thus could not join me and be ambushed by his friend's questionable summit-influenced judgement of what would be a good trail for a beginner.  In some respects, it felt like my first real snowshoe trip in terms of mileage, elevation, snow depth, and weather conditions.  And while the snow muted the scenery, it was unquestionably wild and beautiful fun.  But it's no sure thing snowshoer thing. 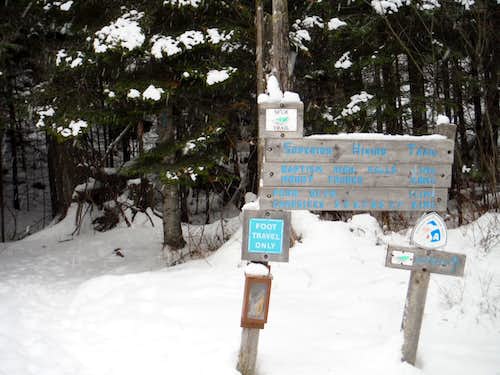 Superior Hiking Trailhead on a snowy day. 4.8 Miles to Mount Trudee does not seem too bad. Seemed closer on the map.
The first mile into Tettegouche State Park did not lack for views. 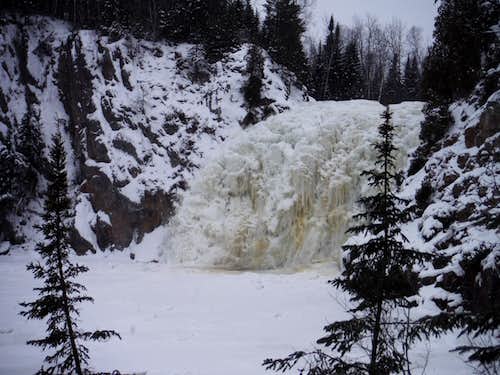 High Falls of Baptism River, Frozen after a wet Autumn 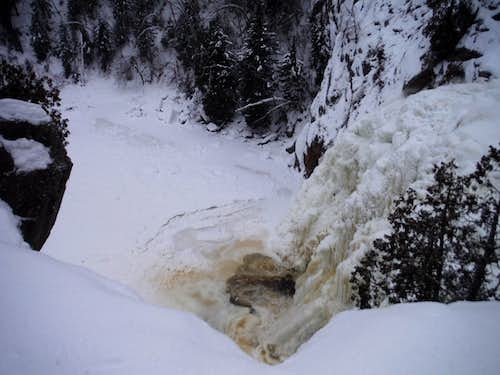 Looking down on the Frozen Baptism River's High Falls 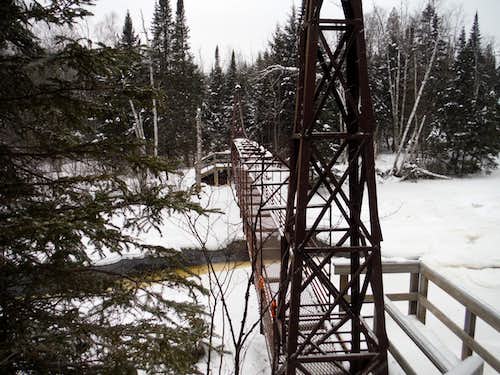 Bridge Over Frozen Water
Boy it was taking longer than I thought it would.  I was used to estimating time in terms of hiking speed, not snowshoeing speed - especially on increasingly less broken trail, with snow increasing as the morning wore on.  And a sign I did not figure out initially... 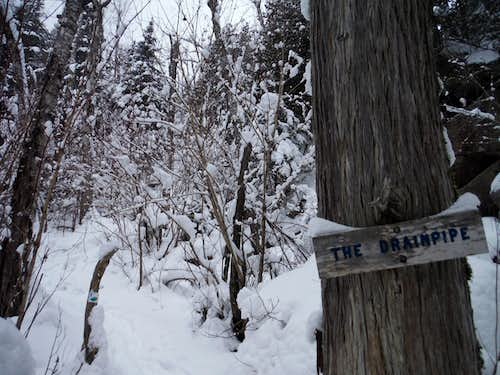 'The Drainpipe' ? What does that mean? 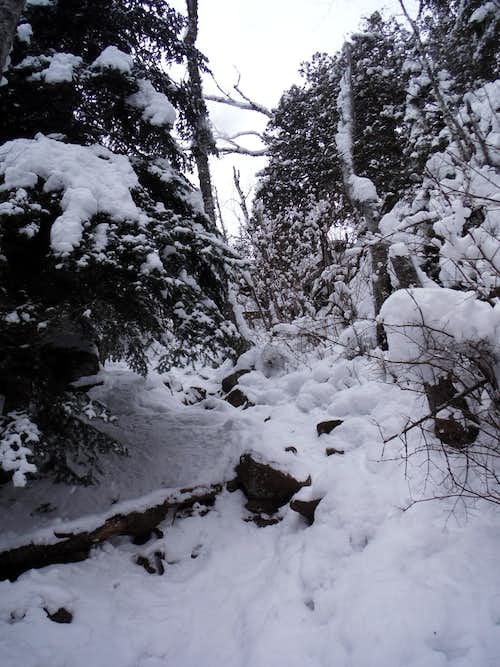 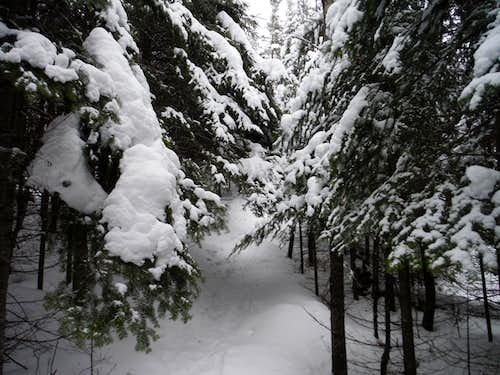 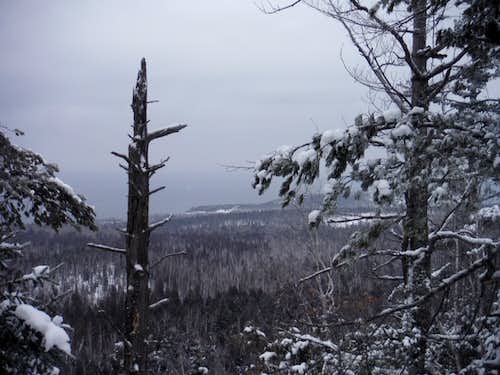 First Vague Gray Views of Lake Superior through the Snow 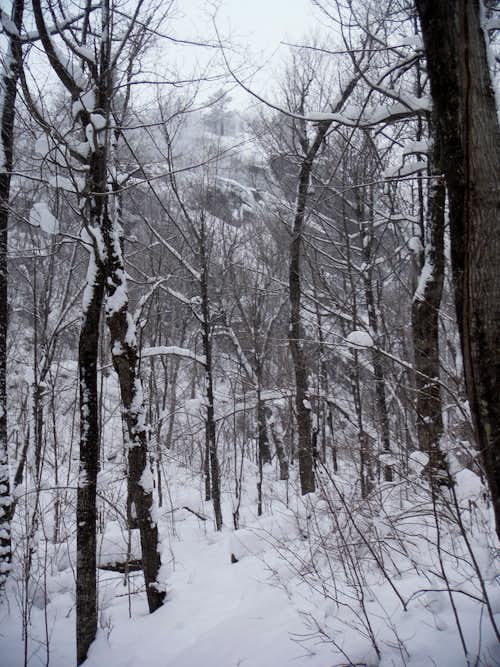 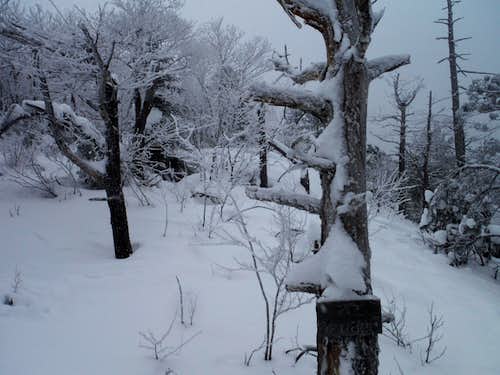 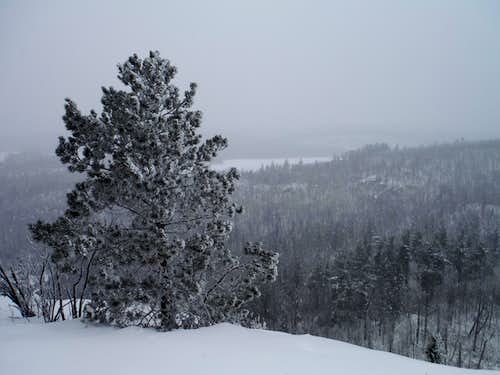 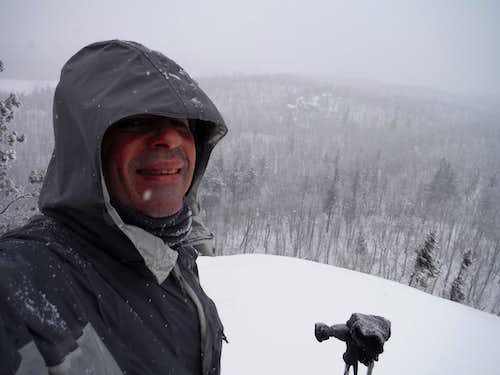 Almost Big Mistake: How to Quick Freeze Gloves While Eating lunch and Taking selfies.
Everything I love about snowshoeing...just more of it than I expected.

...but it's been way too long, like 33 years ago, as a crazy 19 year old on a bicycle. I remember hiking along that river. The falls were amazing, but it was a bit warmer in late June. A really beautiful area. Thanks for posting...

Re: Love the North Shore...

I too have fallen under the spell of the North Shore - this was my third time and I can't wait to go back. For a Chicagoan like me, it is accessible (8 hours by car) majesty.