Socked in on James Peak...or not?

As described in my previous trip report...I really needed to hit the mountains. I hadn't been anywhere in the mountains since December while I was back home in WA for Christmas! For my first mountain summit of 2011 we went out to tackle James Peak in the Front Range last Wednesday. Three of us went and lets just say it was a very fun adventure of wind, clouds, snowshoeing, route finding, post-holing, and to our surprise...a lot of great views. The drive up to Alice from Golden went fast and we were hiking by 7. I was surprised how short the walk was to the lake at the base of St. Marys Glacier. It was still frozen and we could barely see the glacier from the lake due to such thick clouds. We started around the lake and headed up the glacier. If you are from WA like me you know this is the biggest joke ever. It isn't really a glacier and in fact, no more glaciers exist in CO! Didn't need crampons or snowshoes to ascend it...it was nice and firm. This was actually the easiest part of the climb.

View from the St. Marys glacier into a barely distinguishable white mass 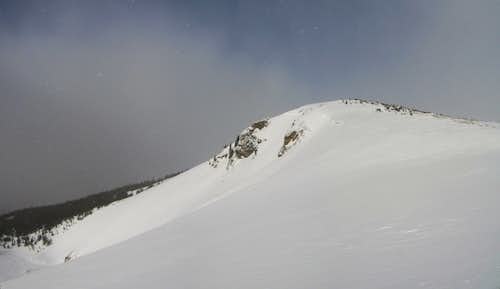 The next part of the climb really sucked as there was a mile of flat walking through snow just soft enough to annoy you but not soft enough to take the effort to put on your snowshoes. The cloud layer was maybe only a few hundred thick as we could see the ball of light that is the sun right through them. We hoped that at the summit we'd be above the clouds and get some views. At the base of the final 1200 foot climb up James we stopped for a snack and to put on snowshoes. A short section required them but by the time we got to the steeper part of the climb the snow was firm enough to walk on. We got a little disoriented and ended up climbing up the north ridge of James right along some cornices. Areas of rock outcroppings within the mass of snow helped speed things up. We finally saw the infamous 4 foot cairns below us just as we summited. Visibility wasn't improving much and the only thing we saw at the summit was ourselves!

It was very nice though as the winds died down and it was pretty warm. We sat at the top for maybe 15 minutes hoping it might clear up. When we realized it wasn't, we started down. To my surprise though, once we descended a few hundred feet, the clouds lifted and we saw our first views of the day. "HOLY CRAP" I remember saying as the clouds quickly lifted away and revealed to us the whole Front Range. We didn't get to see anything to the west but the views we got on the descent were fantastic. I kept running down the soft snow about a hundred feet and then stopping to take a bunch of photos.

The clouds breaking up!

First look at Grays and Torreys 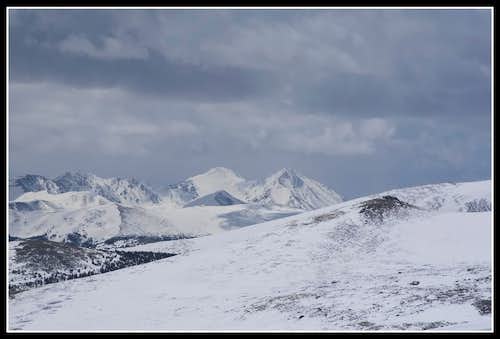 Close up of Grays and Torreys

Descending James Peak with Evans in the distance

Once we got back down to the large flat area the sun was shining nicely. It was a long one mile slog back to the top of the so called glacier but it never got bad enough to put the snowshoes back on.

Looking towards the glacier; what a long flat slog 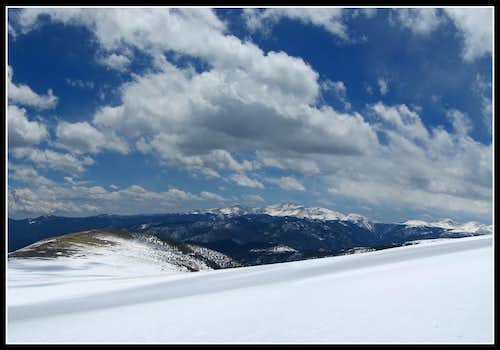 View of Mt. Evans and Bierstadt

Lots of snow still up there 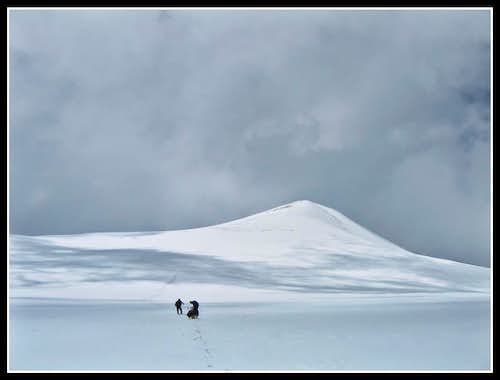 Looking back at James Peak

We finally made it back to the glacier where our final descent lay ahead of us. We were hoping there would be a nice glissade here but the snow had softened enough for only a 50 foot slide. 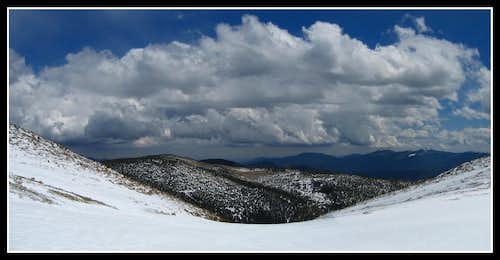 At the top of St. Marys

The day turned out to be very nice though as we made the final hike back to the car down the old road.

Same view as earlier in the morning only better! 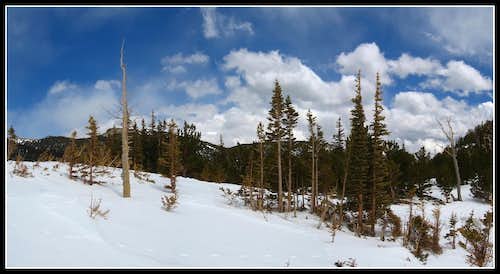 A great way for a Wednesday stroll!

View Socked in on James Peak...or not? Image Gallery - 15 Images

You make this look very appealing

Nice write up and way to make the most of it!

The weather on James, compared to most places in the Rockies or Colorado, is actually quite predictable - Expect high winds and low visibility at all times! Thanks for the report and pictures. IT looks like you got lucky this time.

Check out this site for some information on glaciers in Colorado. As it turns out, the question of whether or not glaciers still exist in Colorado depends on who you ask:

Looks like an awesome trip. I'll have to visit this place soon.

There are actually a few actual glaciers in Colorado, noting like WA though of course. Mills Glacier on Longs Peak is among the few in CO. St. Mary's is simply a permanent ice patch.