This is a great route with superb climbing. Five short pitches totaling about 340 feet of climbing take you to the narrow and exposed summit. Since it's on the sunny south face, climb this route in winter sometime for complete solitude! The first pitch has the only poor rock on the route and has some off-width thrashing while the upper four pitches offer various types of climbing from thin finger cracks, thin hand cracks to some chimney climbing. The crux of the route is at the end of the second pitch where a 10 foot thin finger crack guarded by a small overhang takes you to the second belay ledge. 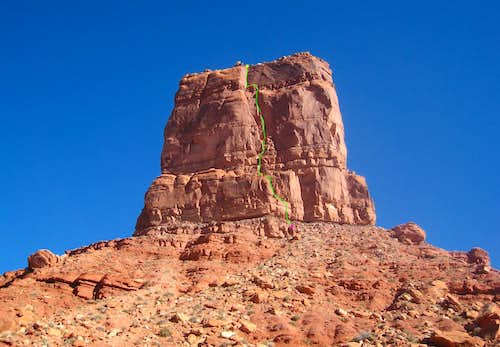 Park at a small pull-out along the Valley of the Gods Road shortly after the road crosses a small dry wash (if coming from the east side of the loop). You should be able to see the entire south face head on and the route is the obvious cleft cutting down the middle of the face. Begin hiking straight towards the face and cross the small dry wash. Work your way up the 300 foot talus cone on the path of least resistance. Lots of loose rock is found but the approach is short and takes only 20 minutes or so.

Descending the route is actually fairly simple. With a 70 meter rope there are three rappels. Locate a bunch of slings around one of the large blocks about 10 feet to the right of where you topped out on the summit. This is the first rappel. Make a long rappel to the bomber anchor at the top of the third pitch. Don't rappel from the pitons at the base of the final pitch. Make a second long rappel to the huge ledge atop of the first pitch. Finally rappel the first pitch using the slings at the top of the chimney. This rappel has an awkward start and squeezing through the chimney can be a challenge. 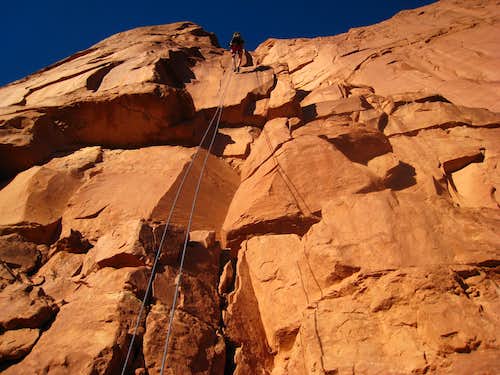 Chris on the second rappel

Bring a double rack of BD Camelots from 0.3 - 3 inches. Also have some smaller stuff like Metolius 0-1 Mastercams. Helmets are a must. 70 meter rope

Valley of the Gods Info