The Oregon Buttes, near South Pass in Wyoming, were landmarks for westward-traveling pioneers. Oregon Trail pioneers recognized the Oregon Buttes as the halfway point of their journey.

South Oregon Butte, guarded by cliffs on all sides, is the second-highest of the three (there are some lower ones south of West Oregon Butte, but they are more like rugged extensions of it than separate buttes), and it is the hardest to climb. Expect any route up it to involve some Class 3 scrambling on steep, loose terrain. In fact, after my first time seeing it in 2004, seeing it again in 2007, studying my pictures and maps, and finally climbing it in 2010, I am pretty sure that the weakness I found on the northeastern face is the only non-technical way up the peak, and I am not so sure how much I would trust my protection on the brittle sandstone here.

It is also the only one of the three that is not on the Continental Divide. There is a benchmark (placed in 1957), and there are some metal wires and a few other scattered signs of some former structure up top. The flat, open summit and its rims afford amazing views. If you are into the vast emptiness and distant mountains of country like this, you will love what you see. There are views of the other Oregon Buttes, nearby Continental Peak and the Honeycomb Buttes, the flat expanse of the Great Divide Basin, and, to the north, the snowcapped summits of the Wind River Range. 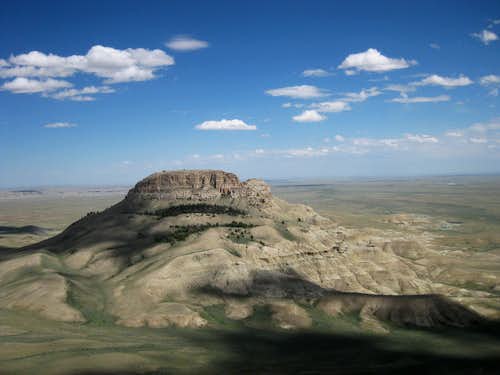 Although a desert-and-sage sea surrounds it, South Oregon Butte and its neighbors are semi-moist islands. Limber pines grow on some of the slopes and seem wildly out of place considering the setting. Elk and mountain lions even survive here, confined to these tiny ecosystems. Birds of prey, including golden eagles, are common.

Below the slopes, the jaws of the desert await. Where the ground is not an expanse of sagebrush, it is riddled with clay badlands that turn to mud when it rains and make for treacherous, exhausting footing even when dry.

Distance to summit: 2 miles
Total elevation gain (approximate): 1100’
Difficulty: Mostly Class 2, but Class 2+ or 3 on the final push to the summit plateau.

Note-- if you are looking at this peak on the Joe Hay Rim USGS quad, you will see a 4wd road going over a saddle just north of the peak. Forget about it; it is closed now, and it is indiscernible, too.

Your first goal is the saddle between North Oregon Butte and South Oregon Butte; the saddle is at 7900’. Depending on where you park, you will hike about 1.5 mi and gain around 500’ to get there.

From the saddle, hike up steep slopes and then contour southeast, getting higher and higher on ever-steepening slopes (from the saddle, you gain about 600’ in about half a mile) until you break through to the summit plateau. The key is to aim for an area of trees just left of a long cliff band on the north face; that is the weakness on the peak. 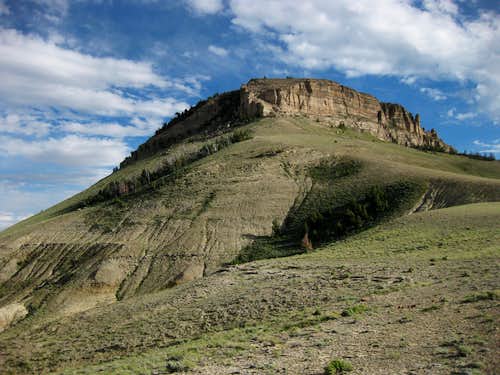 The left end of that cliff band might offer something in the Class 4-low 5 range. It looked doable, but this was my fourth summit of the day, and I just decided to go with what looked more likely to work. 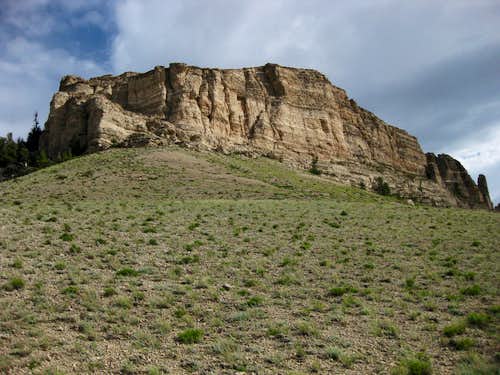 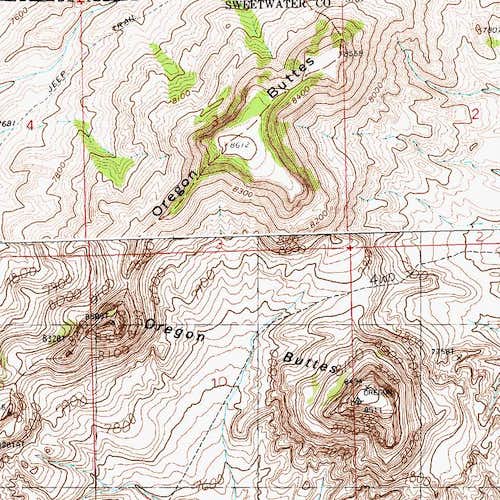 Getting There, Red Tape, Camping

At South Pass on WY 28 (do not confuse this spot with the interpretive pullout marked “South Pass” that is a little west of the actual pass), turn south onto Oregon Buttes Road. When dry, this road is suitable for most vehicles, but when wet, it can be impassable even if you have 4wd.

Park anywhere between 10 and 12 miles from South Pass (I parked at 11.2 miles, where I saw that a quick ascent of a low rise would take me across relatively flat terrain to the saddle) and hike cross-country to the saddle. Do not head up one of the washes through the convoluted badlands on the west side of the road, that will only make your route longer and more difficult (very loose, treacherous terrain).

Nothing beyond respecting vehicle restrictions and the occasional stretch of private property.

A word of caution, though-- have a good spare and enough food and water to spend at least one extra night out if you have weather or mechanical problems. This part of the Great Divide Basin does not see a lot of traffic, and you are likely going to have to hike the nine miles back to South Pass if you need help (just east of the pass, there is a rest area and store, though I don’t know if that outpost is open year-round).