A Wilderness trail through alpine meadows with fantastic wildflowers (summer) leads to a rugged ridge with enjoyable scrambling, particularly the final 150 feet below the summit.

Starting from the 10,400' parking area, walk or drive about .7 miles up the Matterhorn Creek Jeep Road to the end of the road and a forest service gate at a small parking area at 10,720'. Continue on the Matterhorn Creek trail for 3/4 of a mile to 11,200' in a large meadow. The main trail heads straight, but you do not want to follow it. Instead, switchback up to the right and enter into the Uncompahgre Wilderness on the Ridge Stock Driveway. As you continue on the trail you will enter a high meadow near treeline and the first peak you will see ahead of you in Matterhorn Peak, Wetterhorn will slowly begin to appear to your left. Look to your left for the signed turnoff for the Wetterhorn Peak trail, the start of the route up the southeast ridge. 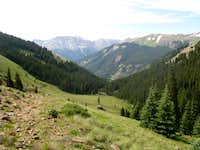 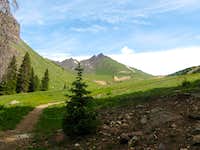 The Wetterhorn Peak trail works its way up to a high bench below Wetterhorn’s large east face, as it passes through tundra meadows and talus. The trail is generally easy to follow through this section, but don’t get too distracted by the beautiful scenery. The trail starts to climb steeply up to the ridge at 13,060', a great break spot before engaging the final ascent. Early season, snow lingers just below this saddle, crossing the trail. You may need microspikes or other traction for this section if it’s a cold morning, otherwise you should be able to kick steps. 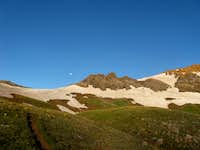 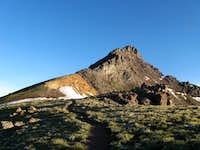 Initially the ridge follows a climbers trail along the crest of the ridge, and the early elevation goes quickly, don’t be fooled as the difficulties slowly increase the remaining way. At 13,400' some rugged towers on the ridge crest will force you left for a few hundred feet of difficult class 2 with an occasional class 3 move. The route is generally well cairned, but pay close attention to your route to stay on track, and to know your descent route. At around 13,600' you will come to a tower called “Ships Prow”. Cross a rock rib and ascend a shallow gully (class 3) to reach the ridge crest where you will pass to the right (east) side of the ridge through a notch and bypass “Ships Prow” on the right. Between “Ships Prow” and the summit pass through the second notch (not the one immediately after “Ships Prow”), traverse a wide ledge for 15' to the base of the final summit pitch. This is a good ledge to step back and preview your route. 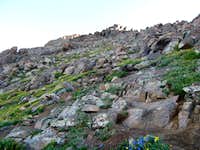 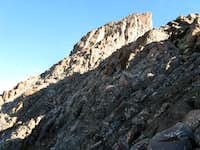 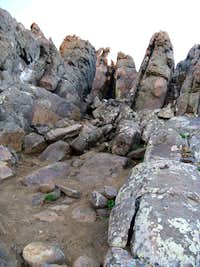 Engage the gully, the climbing is generally fairly solid but as the fourteeners can be quite popular, a helmet and caution to not kick rocks on your fellow climbers is always a good idea. The easier climbing is usually towards the left side of the gully. About halfway up there is a ledge to exit this first gully and climb a slighly easier gully if the top of the main gully is deemed too steep for you. The climb is enjoyable, like climbing a really steep staircase or a ladder. For many, this the first true 3rd class fourteener they climb. The climb ends abruptly at the summit, which offers great views of the rugged surrounding peaks. 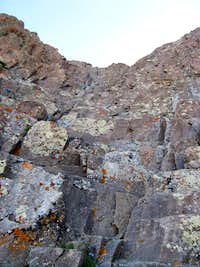 Most of the year, you will need no more than a good pair of legs, strong lungs, solid determination, and a helmet for the final pitch. On the “shoulder seasons” the possibility for snow or ice on the summit pitch may require an ice axe and either crampons or microspikes. You may also want microspikes to reach the saddle early in the season if its a cold morning.

Winter climbs are long and pass through potentially avalanche prone slopes, any attempt will likely require a backcountry camp in addition to strong avalanche evaluation and avoidance skills. Winter climbs are only recommended for the most experience winter fourteener climber.