This is a fun, quick route up the peak and does involve some exposure, so anyone wishing to avoid that should instead consider the easier South Slopes and Couloir route also attached to the main page.  In the Bonney guide, this route is what is referred to as the East Ridge.  If Kelsey covers this route in his guide, I am not sure what it is called, though it is probably East Ridge or Southeast Ridge.

Start from Elkhart Park, about 9400', and hike 10.5 mi to Island Lake, about 10,400'.  While this sounds like one of the world's easiest backpacking approaches, it is more strenuous than it sounds, for the route does not ascend a drainage or other naturally ascending line but rather has several dips and reclimbs that make the total elevation gain closer to 2000' (still not that bad but frustrating nevertheless).  And the first 5 miles are almost exclusively extremely dull hiking through lodgepole pine forest with no views of anything except more lodgepole pines.
Although there are several trail junctions along the way, with a good map and decent reading comprehension, you will not have trouble following the correct route.
Where you camp is up to you based on your itinerary.  Island Lake makes a good base camp because routes to Titcomb Basin, Indian Basin, and other areas nearby all branch out from it.
Find an unsigned but well-trodden trail climbing along an inlet stream of Island Lake.  The inlet and trail are on the southeast side of the lake; the trail climbs steeply and disappears in less than a mile but gets you to within plain view of the southern and eastern aspects of the peak.
Next, make your way along the path of least resistance (Class 2-3) to a prominent saddle between Elephant Head and Point 11,904.  Note: Bonney says to climb from the saddle between Elephant Head and Harrower Peak (also called Ellingwood Peak), but that is technically incorrect due to the existence of Point 11,904.  There are actually two saddles, one on each side of the unnamed peak, at about the same altitude.  Going between them is pretty simple if you happen to get to the eastern saddle instead, but going via the eastern saddle will add a little bit of time and effort to the approach.  Anyway, it should be pretty obvious where to go once you actually see the terrain. 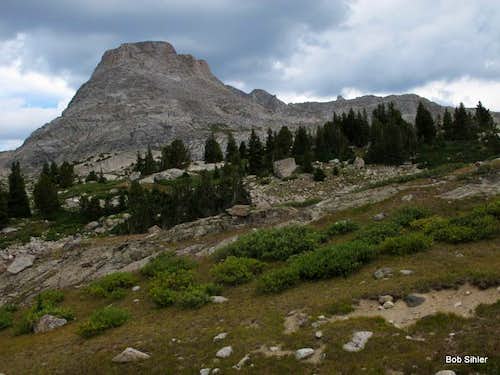 From the saddle, work straight up the ridge, staying on the crest or as close to it as possible.  There will be some Class 4 moves, and the exposure becomes greater near the top, where, in my opinion, you encounter the crux of the route as well. 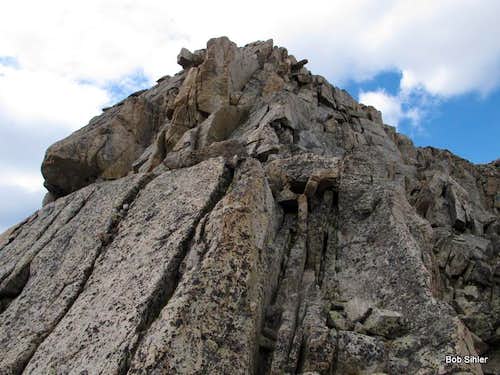 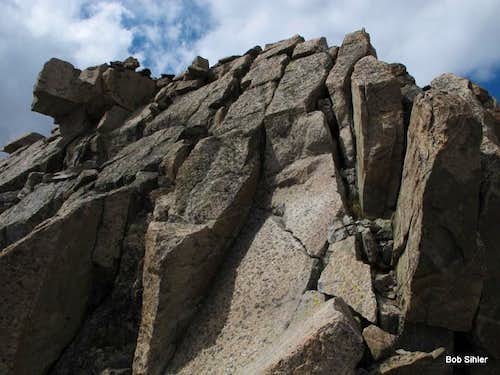 Airy crux section
I noticed the occasional cairn along the way, but there really is not a cairned route.  And don't make one; this is not Colorado 14er country!
There seems to be easier terrain well below the crest for much of the way, but it looks more difficult higher up, so again, stick with the ridge.
Exiting the ridge, you find yourself very close to the summit cairn.
From Island Lake, the RT distance is around 3.5 mi.  It only took me 20 minutes to climb the ridge from the saddle, but plan according to your pace, not mine!

Except in late summer, it is probably a good idea to have an ice axe.  There was not a lot of loose rock on this route, but wearing a helmet is still smart.