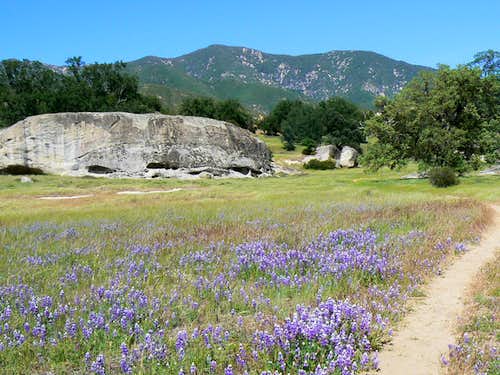 Junipero Serra from the trailhead 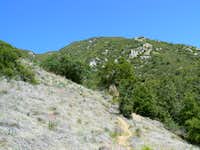 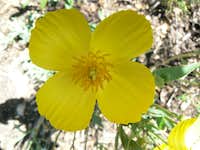 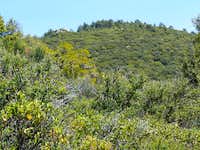 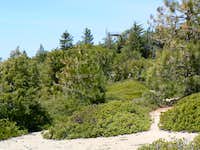 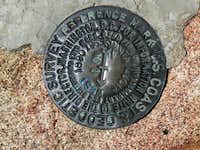 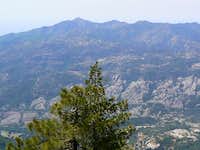 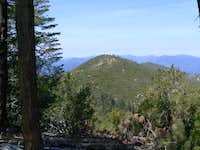 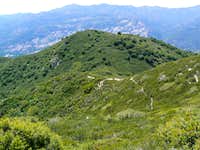 View from the S ridge descending

My son’s participation in his second Wildflower Triathlon at Lake San Antonio saw me heading down south on April 27 with the added intention of getting some hiking in before the race. I had originally intended to keep this phase of the trip pretty gentle in that I’m still not fully recovered from surgery following the unfortunate events of my trip to the wilderness area SE of Annapurna last October. However, a better than expected rate of recovery encouraged me to find terrain whose general direction was up rather than level and, since I’ve never been there and since they’re close to Lake San Antonio, the Santa Lucias seemed to fit the bill nicely.

This is a great time of year to visit these hills and I had some great hikes amongst them. However, I hadn’t thought about a trip report until I got home, logged into SP and discovered that no-one had yet written one for Junipero Serra Peak, the highest point in the range and a very worthwhile daytrip at that, with 20 km of map distance as well as nearly 1,200 metres of relief to deal with. So, for better or worse, here’s the first SP description of a hike up this lovely forested mountain.

After a quick trip up Cone Peak on April 29, I car camped at Memorial Park in preparation for an early start the next morning. At this time of the year there’s almost no one around and I had the place pretty much to myself. It’s a rather dismal site, completely in the trees and rather unkempt. Since I was fully self-contained I’d have been better off to camp right at the trailhead with its wonderful view across the flower filled meadows to the mountain beyond. But hindsight, as they say, is always 20:20.

After a surprisingly cold night, I was up with the lark and away by 7.45.

Easy trail led east across flower filled meadows lined by oaks until eventually entering the trees themselves. For 45 minutes the route was almost flat. In fact, it was well over an hour before I noticed any appreciable uphill.

Eventually the way turned north, out of the trees and up steep grass before arriving on the chaparral covered south ridge of Serra Peak at about 10 am. As others have reported, the route is starting to become quite choked with bush and, although contoured and well made underfoot, a bit of effort is required to push through on occasion and a sharp eye needed to avoid getting spiked by yuccas or covered in the ever present ticks that frequent this and all hills in the Santa Lucias.

In any event I had a last break at 10.45 at 1,565 metres and thought from the position of the old summit lookout that I was about 15-20 minutes away from the top. In fact I was still 45 minutes away. Rather than continuing up the south ridge, the trail crosses over a saddle between Serra Peak and a bump to the north and contours the north side of the peak in an easterly direction before heading back up and south to the summit.

Immediately one crosses the saddle to the north side of the mountain, the habitat changes from dense chaparral to open bristle cone pine forest. I found the abruptness of the change quite fascinating.

The summit of Junipero Serra is rather disappointing. In fact it’s quite hard to find. Around the old lookout tower is a flat area 1 or 2 hectares in size with several possible high points. I wandered around up there for an hour and still might not have found the right spot. I did find a USCGS witness benchmark at N 36° 08.749 W 121° 25.249 but no main mark.

It was all very pleasant, however, and I enjoyed a snooze in the sun and lunch before heading down at 12.45. The dicey knee held up well as I dropped the 1,200 metres to the car in just over two and a half hours. The bush on the south ridge held me up a bit but other than that it was put the brain in neutral and enjoy the scenery time.

Just to complete a perfect day not a single tick attached its odious little body to mine. I saw plenty but they thankfully left me alone.

And if readers will indulge a proud father, two days later my son ran a personal best Half Ironman at Lake San Antonio by over 20 minutes, finished 17th in his age category out of 250 and 80th overall out of more than 2,500. He even beat 3 pros!
Junipero Serra Summit panorama from approximately SW to N. Compare to the reverse view taken earlier from Cone Peak.

Congrats to your son.

Yes, I thought it made quite a nice little story. Nothing difficult are overly arduous about the trip. I was surprised to find that no-one had bothered to write up anything to date.

Thanks also for the congrats. Indulging proud fathers isn't an SP prerequisite but it's appreciated anyway.

write-up! The Junipero Serra area reminds me of the forest
surrounding Payson, Arizona. We live in the so-called
'transition zone' and there's an abundance of juniper/pine.
It also doesn't get the popularity of the desert monuments
or National Parks, which is okay by me. Great page, Martin!

Thanks Larry and sorry it's taken so long to acknowledge your kind comments.

Good job I decided to write a TR since the area is mainly charcoal now. How quickly things can change.

Yes, I used to fight wildfires in the PAC NW. They can be both
good and bad. I have a question: are there Roosevelt elk and
Mule deer living on Vancouver Island?? (How did they get there;
did they swim across the Straits?) -Cheers, Larry