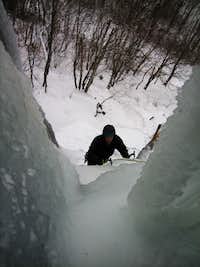 A classic climb on a classic New England cliff, the Standard Route offers moderate multi-pitch ice climbing on fat ice, practically at the side of the road.
We found a surprising variety of ice conditions during the climb, from slush to brittle, but mostly excellent blue ice. Generally speaking, if there's ice anywhere in New Hampshire, you'll find it on the Standard Route of Frankenstein Cliff. (Except very early and late in the season: Huntington Ravine usually freezes earlier and melts later.)
Such a well-known climb can be expected to be crowded; most guidebooks advise arriving very early and/or on a weekday. In my experience arriving very late during bad weather will also work well, but in any event there are several other interesting climbs nearby.

Since Frankenstein Cliff doesn't (yet) have its own page on Summitpost, a word about this area is in order. Frankenstein cliff is among a handful of premier climbing areas in the Northeast. Routes start at WI 3 and go right on up. Though the truly hard-core will probably prefer a fearsomely difficult and committing ice or mixed route on Cannon Cliff (or possibly Evans Notch - I bet there's some unexplored stuff there), for mere mortals Frankenstein Cliff offers an ideal combination of variety, challenge, and convenience. 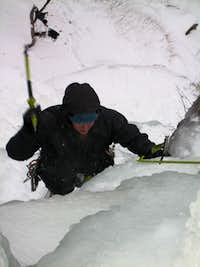 Most of the intermediate routes were pioneered in the winter of 1970-71, notably by Sam Streibert and Dennis Merritt, with other climbers putting up harder routes like "Dracula" in 1973.

The cliff forms part of the west side of Crawford Notch, arguably constituting a southern extension of the Willey Range. In summer, hikers enjoy the view from an easy hike along the top of the cliff from Arethusa Falls to Ripley Falls, but the rock faces are always deserted and the crag is too low to count on any peak-baggers' lists. In winter, though, it's famous.

To Frankenstein Cliff
The cliff is located on the west side of Route 302, in Crawford Notch State Park northwest of North Conway. Access is from the parking lot on Arethusa Falls Road.
There is a large parking lot at the base of the road, and parking is also permitted at the end of the road (just a few hundred feet further). Do not block the driveway of the house at the end of the road (private property). Drive VERY carefully when descending the road after it's been snowing all day.

If driving from Boston, you have two options:
a) take Interstate 95 to Portsmouth, then follow Route 16 (which goes by a few other names, notably Spaulding Turnpike) until it converges with Route 302 between Conway and North Conway. Stay on 302 when it diverges at the village of Glen. From there it's roughly 16 miles to Arethusa Falls road (on your left).
This route is direct but prone to traffic delays, and costs around $5 in tolls each way.
b) Take interstate 93 through Franconia Notch, then turn right on route 3 (by the Cannon Mountain ski area), and turn right again onto route 302 (at the town of Twin Mountain) and proceed through Crawford Notch to reach Arethusa Falls Rd from the north. (It's about 15 miles south of the Mt Washington Hotel).
This route is longer, but sometimes faster.

Note: don't count on using trailheads to help you find your position on Route 302: the trailhead parking areas aren't plowed, and most signs are removed during the winter. (Notable exceptions are the Appalachian Trail / Webster Cliff Trail [no parking but a permanent sign], Crawford Notch Visitors Center, and Arethusa Falls.)

From the Parking Lot to the Climb

Walk up the road until you're practically touching the "stop - no trespassing" sign in front of the house. A railway extends to your right. Follow that.
After perhaps half a mile the railway travels over a bridge. To your left is the area known as the Amphitheater, which offers a variety of climbs. (The moderate ones are up in the back of the gully, and there are some scary-looking curtains closer to the bridge.) Continue on the railway over the bridge, through a near-tunnel carved into the hillside, and proceed a couple of minutes longer. The Standard Route is a fat and obvious flow which comes down almost to the railway. It should be easy to recognize from the photo below: just look for the cave.

Note: Coordinates above are a best guess from the map. If you've got more-precise coordinates, please comment on this page. [Brian, did your GPS record our climb?] 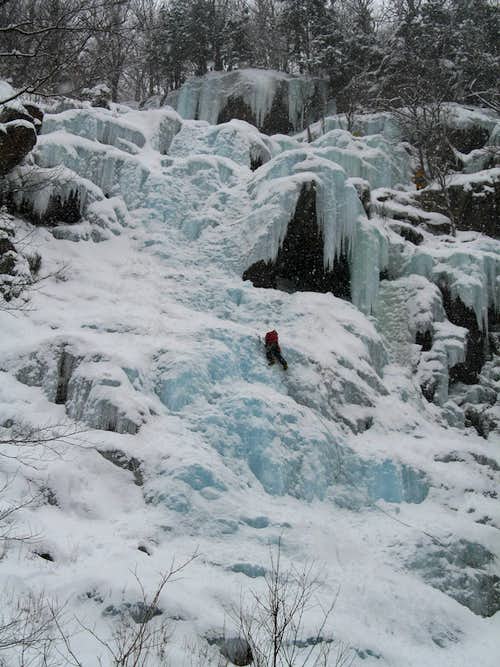 Start is just out of frame to the right at bottom (boulder with trees for anchors). Very short pitch to the first belay inside the big cave just above the climber in red. (Fixed gear inside the cave.) Choice of exiting the cave to the left, or to the right (the "window" - a bit of a squeeze but actually a slightly easier route) - or even climbing the pillar.

[Late in the season, if you go out the window beware of drifting to the right. There you'll find some slabs that are low angle but with thin ice that does not protect well. Instead, climb directly onto the roof of the cave to get back to the main flow.]

Once past the cave (this vertical section is the crux), find a safe spot to set up a belay station. My guidebook implies you would just stand on a bulge in the middle of the flow, but we followed the previous two parties to the trees at the right edge - see standing climber in yellow and grey. (Also a short pitch, but communication into the cave is difficult.)

From there, aim left to avoid the big overhang, and top out into trees (full 60m rope length if you're belaying from the trees at the right edge). Angling right instead would be a mixed variation - presumed more difficult (didn't try it but the party ahead of us, who had been climbing well, backed off it).

We found rappel rings at each of the three belay stations we used, but it's more fun (and kinder to waiting climbers below) to walk to the right along the top of the cliff until you find a snow gully to descend.

Rope, helmet, crampons, ice tools, and a handful of screws (double handful if you like to sew it up), with emphasis on medium to long screws. Slings, rap rings, and Abalakov hook just in case. 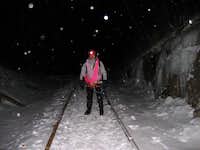 Make sure your gloves are waterproof - I found the first pitch was very wet. Take it from me, wet hands are no fun on an ice climb.

Bring snowshoes for the approach, though you'll probably only need them if you get there early in the morning after a snowfall.

Weather
The climb is fairly sheltered by New England standards, but be prepared to bundle up like an eskimo or retreat fast if the wind picks up.

Ice Climber's Guide to Northern New England, ISBN 0-9720307-1-9
Please comment if you know of additional books or other sources of beta.

No camping within the park (except as noted below); no littering, etc.

The house at the end of Arethusa Falls Rd is private property.

Do not attempt to park along the highway in winter.

*Camping _is_ permitted at Dry River Campground, on the east side of Route 302 about half a mile north of Arethusa Falls Road.   There is no staff and no facilities (not even toilets) in winter (Dec 1st through May 17th), and the access road to the campground is NOT plowed.   Note that in fall 2017 the campground was closed due to storm damage; I'm unclear on what that bodes for winter use.  Call the Park Manager at (603) 374-2272 or check for posted signs.