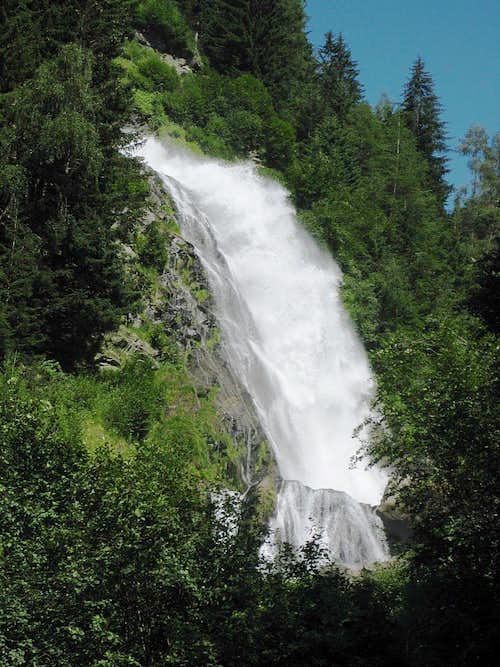 The upper part of the Stuibenfall
The Ötztal is one of the best places in Austria to enjoy a variety of mountain experiences. There are lots of hiking trails, from easy to difficult, and plenty of mountains to explore and climb. Strangely enough, the long Ötztal valley isn't the center of the Ötztal area. The Ötztaler Ache, the river flowing down the valley, marks the eastern border of the area, and to its east lie the Stubaier Alps. Consequently, as the Stuibenfall roars down down the eastern slopes of the valley, it officially belongs to the Stubai Alps, not the Ötztal Alps - yet at the same time it's part of the Ötztal valley. Confusing, isn't it?

The waterfall is an impressive sight by itself (see the big image at the bottom of the page). A steep but well maintained hiking trail sidling up right next to it on the southeast side provides access to hikers, so everybody in reasonable shape can enjoy it. There are several platforms to get closer to the water.

However, the best way to enjoy the waterfall is to go up the exhilarating Via Ferrata (Klettersteig in German) that has been constructed on the northern and western slopes. The route starts by crossing the gentle river just below the falls, and then actually crosses the falls high up - expect to get wet! 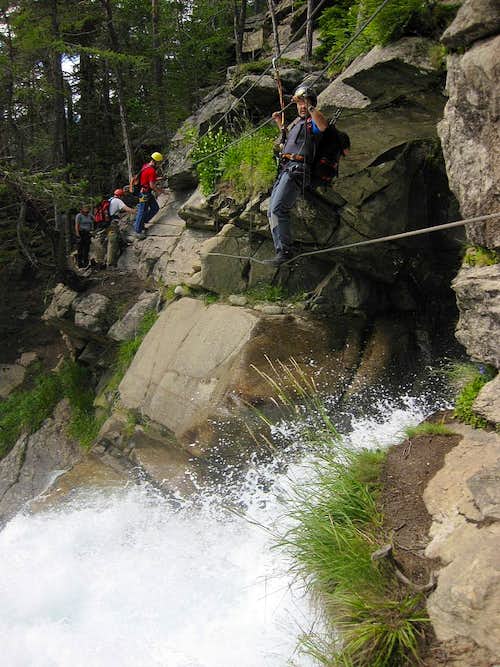 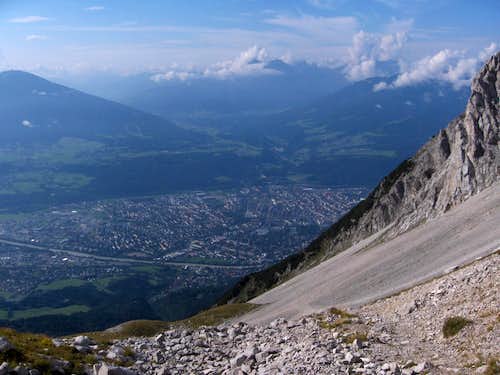 The Ötztal valley can be reached all year round from the north, entering at the village of Ötztal Bahnhof. The nearest big city, just to the east of Ötztal Bahnhof, is Innsbruck, well connected by trains and buses, and with a small international airport. Alternatively, Munich is only a couple of hours to the north. 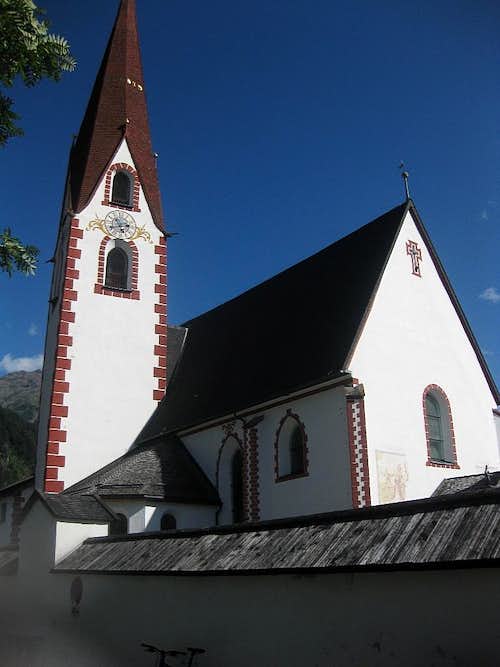 The church in the center of Umhausen
From Ötztal Bahnhof, buses travel down the length of the Ötztal. Ask the bus driver to alert you at the southernmost bus stop in Umhausen.

With private transport, leave the main road when you get to Umhausen and follow the road to Niederthai, aptly named the Niederthaier Straße (L238). You can park a few hundred meters south of Umhausen, at the Ötzi Dorf parking area (47.1320°N / 10.9302°E).

Follow the dirt road to the east, past Ötzi Dorf. It's a little over 1 km to the start of the Via Ferrata, and there are plenty of signs along the way. 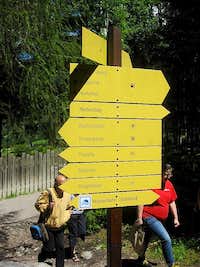 Route signs
From the south
From the south, from Italy, the Ötztal can only be reached when the high Timmelsjoch pass is open. If there is too much snow, the pass is closed, which is normally from late fall to somewhere in spring. In that case, the normal way to get there from the south is to take the long way around over the Brenner pass, via Innsbruck. 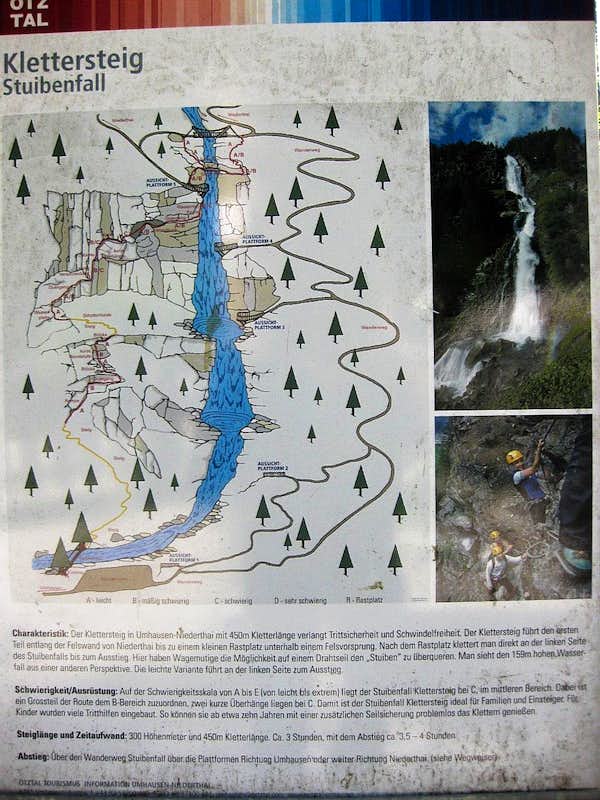 A big information panel at the start of the route clearly explains what to expect. The 3 hours it gives for the ascent is very generous 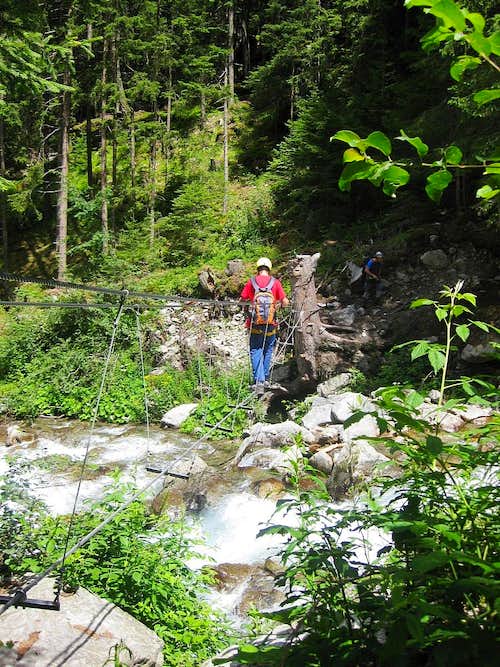 The wire bridge at the start
The route is a Via Ferrata, or, in German, a Klettersteig, grade C.

It starts with three cables over the river below the falls: one to walk on and two for your hands.

But even before that, the information panel clearly explains what you are in for. Together with the bridge that should be enough to stop any uninformed tourist who might otherwise accidentally take it for a hiking trail. 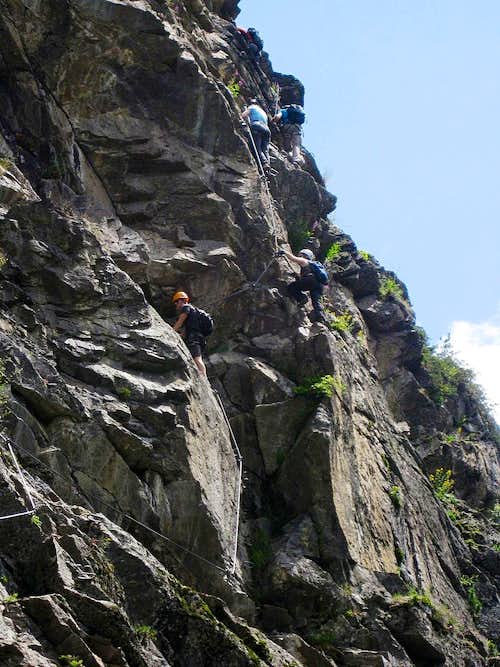 Climbing these cliffs looks harder than it is. There are good holds everywhere, natural or man made, and steel cables secure the length of the route.
After the river crossing, a section of mostly hiking and some easy scrambling through woodlands follows, and there is no water in sight. But once you get higher, the route dramatically changes. It reaches sheer vertical rocky cliffs, and from there on it gets serious.

Soon enough you'll get to see the river deep below, and the views down are impressive. Once you're on the cliffs, you'll find there are plenty of holds, and in addition lots of pegs for additional support. And steel cables secure the route all the way. Eventually you'll come to the crux of the route, a short section of grade C. Mostly it's easier though, which makes the route suitable for novices with a head for heights, provided someone comes along to instruct the proper use of the equipment. The same cables and pegs make route finding a no brainer. 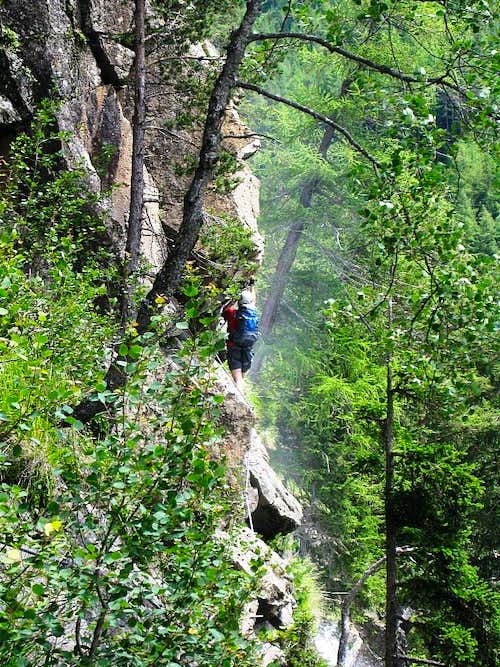 High on the vertical cliffs. It may look dangerous, but the rock quality is fine and the steel cable secures the route 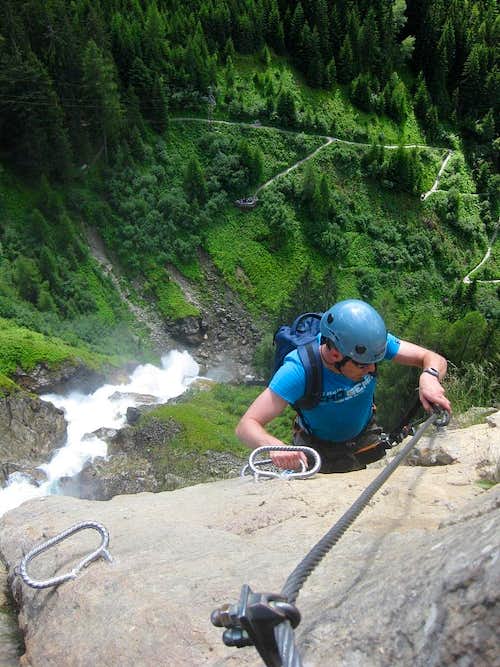 A climber high on the cliffs, not far from the crossing. Note the regular hiking trail on the other side deep down below. 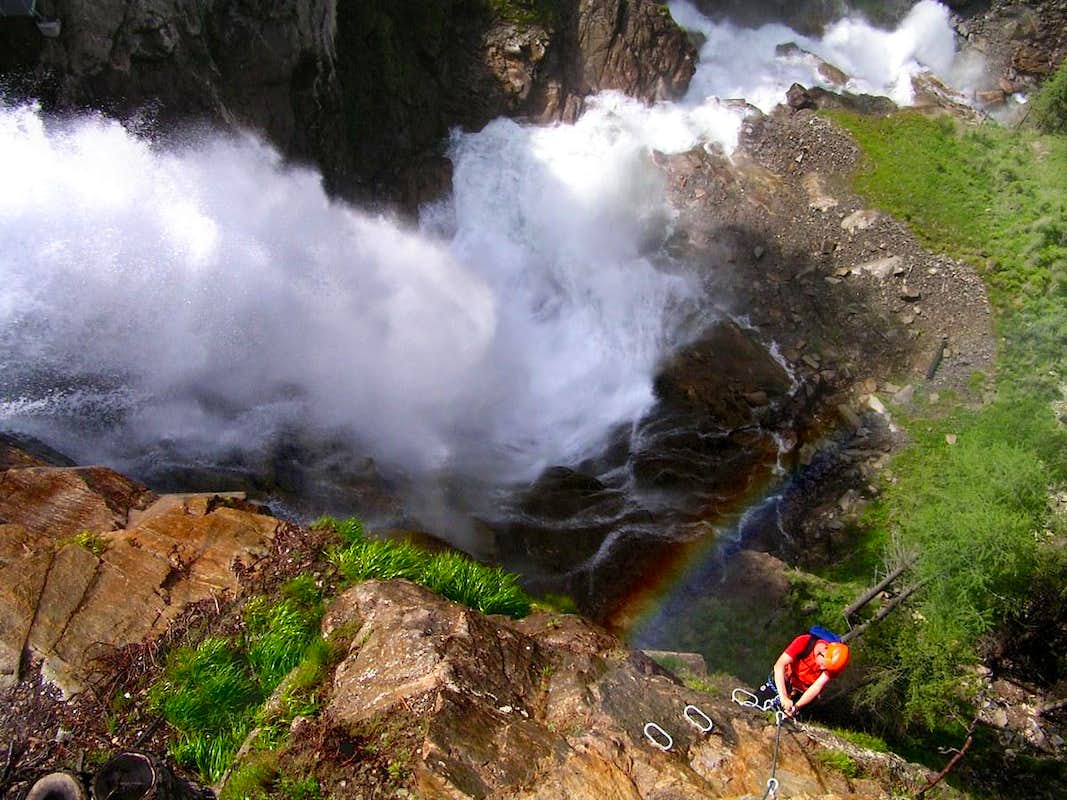 Looking down on the waterfall from high on the route
At the edge of the cliffs, you reach the massive waterfall, and with it the most exhilarating part of the route: you have to walk over a wobbly steel cable hanging right above the waterfall, with just another steel cable higher up to clip in and to hold on to. It's easy enough, but the drop is impressive, and the spray of the water and the thundering sound of the falls makes for a great experience. But if you don't trust yourself to do this, there is an escape route (grade A) that continues up along the falls to a regular bridge, just a few minutes higher.

In fact, after completing the route, I went back down this escape route to cross the falls once again! 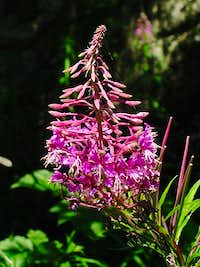 Lots of flowers line the banks of the river and waterfall 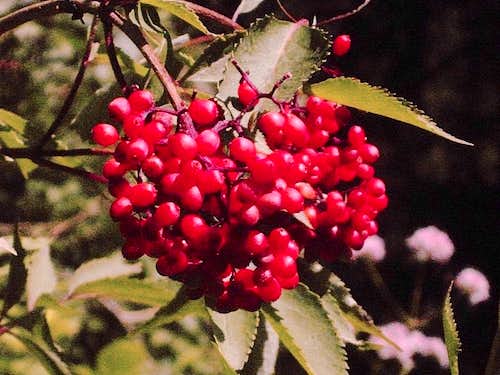 I don't know the cost though, I came by bus.

Best on a hot summer day, but possible as long as it's dry and there isn't too much snow.

Although not absolutely necessary, climbing gloves to protect your hands are very useful, or you easily tear them open on the steel cables.


The Stuibenfall in Full Length