“Summer” Start in the Sawatch

Our goal was to use the holiday weekend to get two peaks with one night at camp. Harvard and Columbia fit that bill perfectly since they were still on my To Do list. In getting ready for the trip, we tried to collect as much beta as possible for the recent “winter” conditions the mountains were still facing during this crazy snow-filled spring… now summer. Besides dozens of weather reports indicating the usual thunderstorms, rain, and snow in our research we found plenty of snowless trips but only a few trip reports of “winter” ascents, nearly all with ski descents as recent as 2011.

We left the car at trailhead around 12:30 pm, temperature above freezing and under a cloudy sky – but fortunately no sign of thunderstorms. We didn’t see snow until about ¼ mile up the trail, just a few patches. 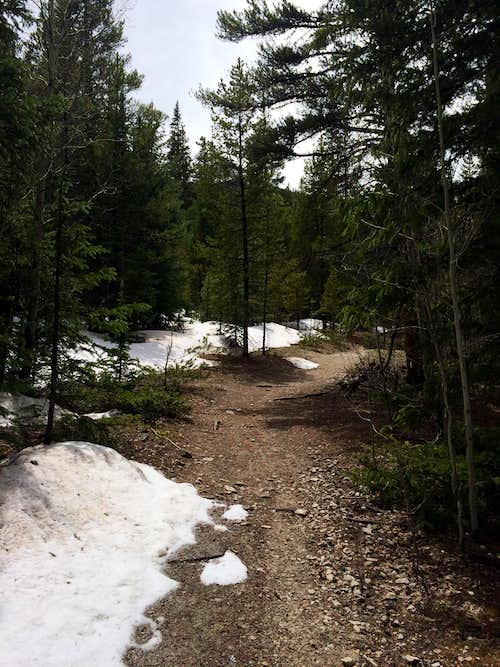 But about a mile into the trail, the snow patches joined forces and spots of no-snow were the rarity. With the warmer temperatures and tons of old snow, it was definitely time for snowshoes. We were able to easily follow someone’s snowshoe and posthole tracks from earlier. 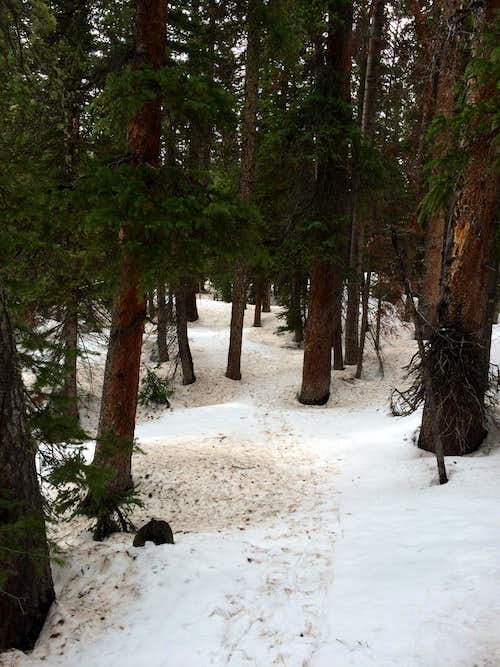 About 2 hours into the hike, the forecasted snow greeted us, quickly covering the old footprints we were following. 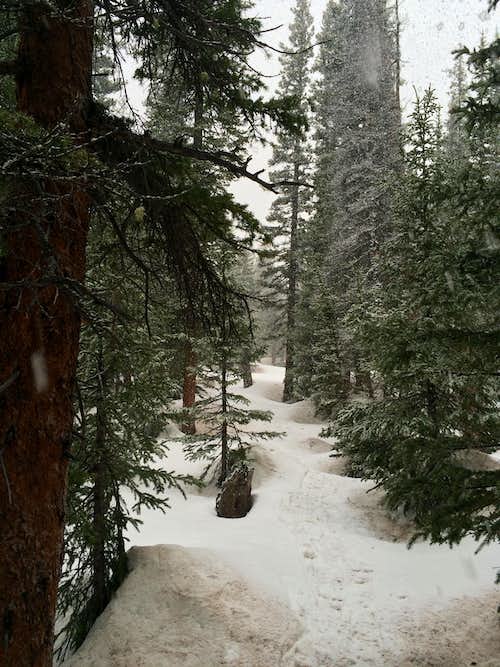 Fortunately the GPS was still working and we were able to make our way through the Horn Fork Basin forest. We hiked up a little past treeline as we considered several spots to set up a tent. Around 5:30 pm we finally found a great spot, under a few windbreaker trees, scooped out and packed the snow down and set up the tent for the evening. 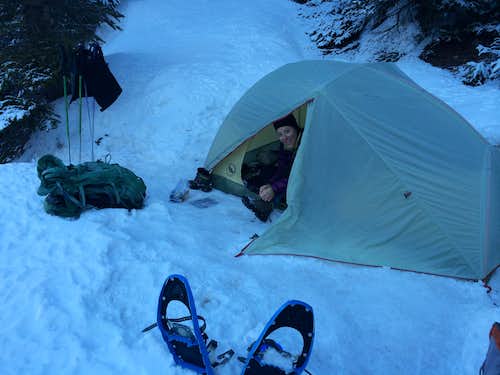 And then the rabbits visited… and didn’t leave. These rabbits nibbled on everything in their reach – including the soft handle of one of my treking poles and a tent stake-loop. Throughout the night the rabbits continued their partying making sure to rustle the tent as much as they could and although I did not sleep well, I was assured that as long as the rabbits were outside playing the mean scary animals must be away.

We emerged from the tent about 7:30 am, to a beautiful bluebird morning, the sun shining on Mt Yale, and hundreds of rabbit tracks in the snow. 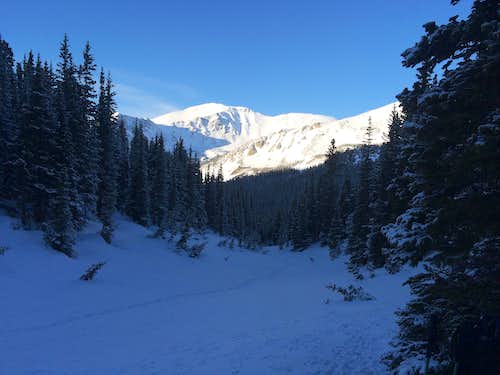 That early in the morning, the snow was hard and icy. I decided that snowshoes would just be extra weight on the summit approach and made the bad decision to abandon them at the tent. Then we followed the GPS out of the basin and to the snow covered willows. 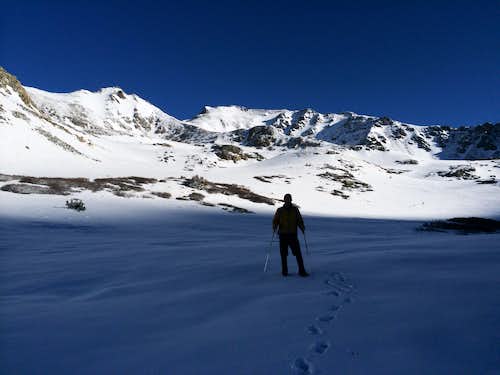 As the sun started to shine, the deep snow got warmer and softer and postholing increased. Apparently the snow underneath was already melting as I discovered water at the bottom of some of my sunken footsteps at the willows. Those hiking later in the summer should be sure to bring a change of socks or waterproof boots. After crossing the willows area the GPS died. Without old tracks to follow, we relied on the route description from 14ers.com imagining piles of snow in the route photos to help us stay on track. We finally managed to get to the crest of the shoulder of Unmamed Peak on the other side of the basin, slogged over it and started our sloppy trek through the basin towards Harvard’s South Ridge. Still plenty of sunshine, warming up the snow as we sank further and further! 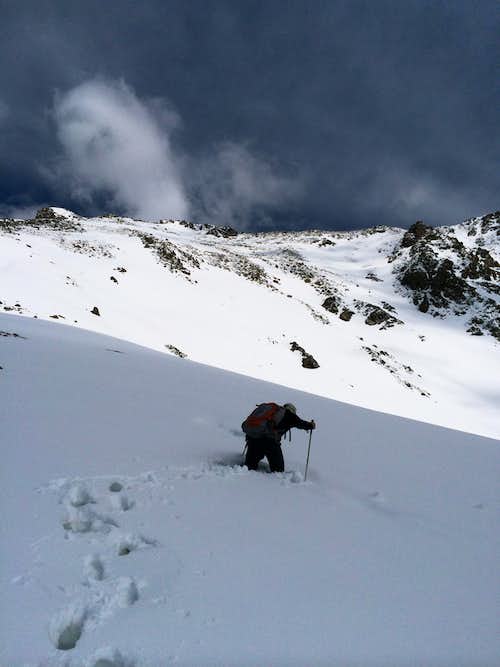 Fortunately there were some spots where the snow was packed well and postholing was not as bad, but the hike to the ridge was still slow and steady. 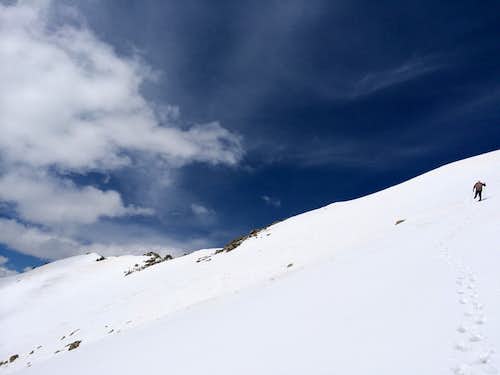 We made it to the summit around 12:30 pm, in time for the clouds to start building up and with no time for the traverse to Columbia. 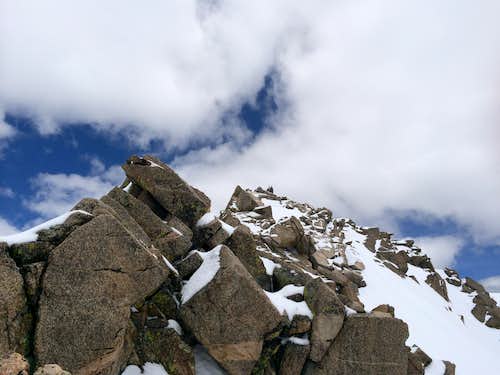 The views from the summit were spectacular and without lightning or wind to wreak havoc, we were able to enjoy them for nearly an hour before reluctantly heading down. 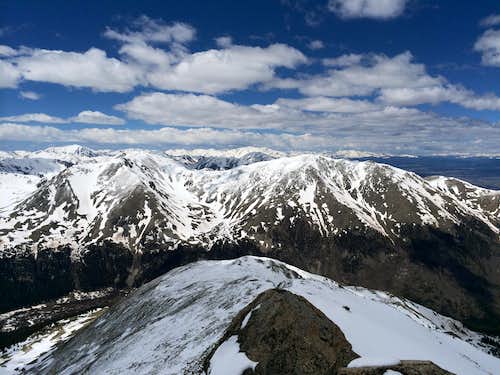 Leaving Columbia as unfinished business, we retreated from the summit around 1:00pm, glissaded as much as the snow would allow, arriving back to the campsite by 4:00pm. We were back on the trail by 5, and back to the car by 8 pm. Saturday resembled spring, but Sunday was a beautiful summer day in the snow.