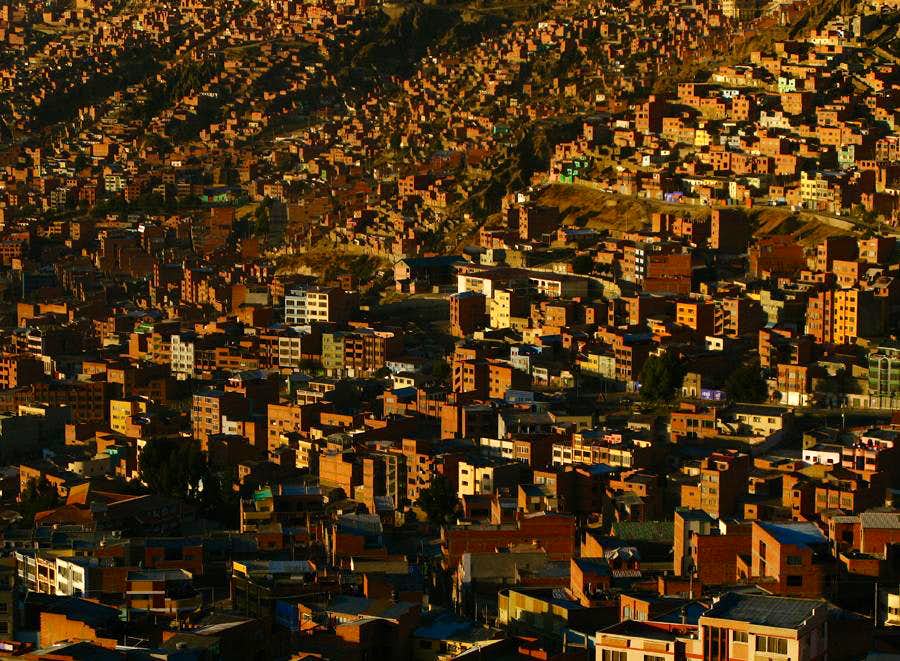 Flying into Bolivia is a shock to the system. The simple act of getting off a plane at world's highest international airport (13,500 feet above sea level) leaves many passengers gasping for air. Additionally, the only flights that arrive from the US land just before sunrise. It was the first of many times on the trip that I would be shaken awake by some unknown Bolivian saying: "Ya hemos llegado, hombre" (We have arrived... man). The lack of oxygen combined with the early morning wake-up call was enough to completely disorient the majority of the passengers. If being forced to pay $135 just to enter the country wasn't enough of a wake-up call, the stunning drive down into the valley-shaped city center of La Paz certainly was. We had our driver stop as the sun rose, lighting up the brick homes belonging to El Alto and La Paz's 1.6 million inhabitants. A closer look at the brick homes of El Alto reveals the city's uncontrolled growth. El Alto, the fastest growing city in Latin America, has latched on to La Paz adding another 800,000 people to the city's population in the last 20 years. Fueled by mass movements of internal migration, Bolivia's indigenous population has flooded El Alto with cheap labor, outstripping the scant natural resources of the high, arid plateau. The majority of El Alto's Aymara population work in La Paz as street vendors.
« PREV NEXT »

Thanks Bob! I really appreciate your comment. I have yet to print this image and see what it looks like large, but have high hopes. I am actually in the process of putting it on a wraparound cover of a book I am working on covering our climbs down there. Should be cool to see it printed in full format.