The Cordillera Real is a mountain range that is part of the Andes, exactly of the Cordillera Oriental. It is located in Bolivia, to the East of La Paz, and in Ecuador, and it's separated from the Cordillera Occidental by the highlands. When the Spanish conquerers (Conquistadores) arrived in the mid 16th century in that area of South America, they were so stunned by the beauty of the mountains that they called this range "Cordillera Real" (Real meaning Royal... and not "real").  In the ancient time, these mountains were adored by the local Aymara civilisation, but were not climbed as they are covered with glaciers (unlike high summits in Peru or Argentina which were climbed by Inca and Pre-Inca ethnies).

Nowadays this range is one of the prime destination for climbers from all over the world, for a good reason : altitude, alpine climbing, accessible routes and rather good weather conditions throughout the year (apart from January to March when it may snow heavily). The highest mountains belonging to the Cordillera Real exceed 6000 meters above sea level and are:

Cordillera Real also provide a magnificent landscape for hiking (ideal for acclimatising).
The ranges goes from almost Lago Titicaca (on its North West tip) down to the suburbs of La Paz (on its South East tip), and is about 150 kms long.

Getting There (La Paz)

The big town is of course La Paz. To reach it you can either :

-> fly with American companies, as the national company (LAB) ran bankrupt in April 2007.
-> take a bus from Peru (direct services from Cusco and Puno / from Chile (direct service from Arica).
In both cases try not to take a Bolivian company as their quality is usually poor.

If you are already in Bolivia :

-> from Sucre, Cochabamba and Santa-Cruz : you can fly with Aerosur (always safer to fly than take a long ride by bus)
-> from Uyuni or Potosi : only buses are available

Mountain groups within the Cordillera Real 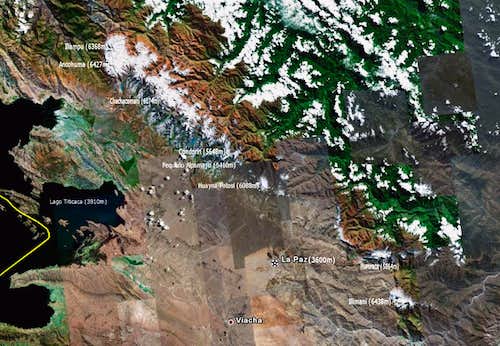 On a clear day a spectacular view of this part of the Cordillera can be seen from Isla del Sol, on Lago Titica. It offers some of the most technical climbs in Bolivia.
The access town is Sorata. There are several daily direct buses from La Paz to reach it.

This area is the less accessible of the whole Cordillera.
You will need to hire a 4x4 transportation to reach Peñas and then Lloco Lloconi.

Located North East of La Paz, it is the faster range to reach.

Condoriri, Pequeño Alpamayo and the South Face of would be accessed from Tuni (about 2h by 4x4 from La Paz).
For the normal route of Huayna Potosi, the access is much faster through Miluni, where there is a hut for base camp.

The best time to climb in the Cordillera Real is between May and September, when the weather is dry. Usually June, July and August are the best months anyhow. This period is the Bolivian winter, which is dry and when normally the weather is quite stable. Possible some fresh snowfalls sometimes. The wind starts in July and as the season progresses more crevasses appear in the glaciers and the "penitentes" in the snow grow.  From November to March, the temperature is higher,  but the rain will make any climb unpleasant and dangerous, since the cocktail of hot weather plus rain plus snow is not very appealing. 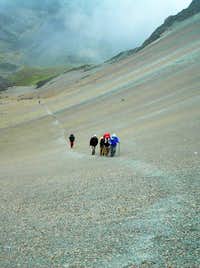 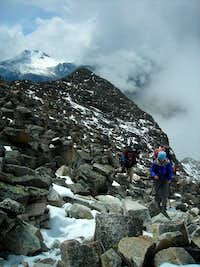 Apart from climbing, Cordillera Real is a beautiful place for hiking. It will provide incredible landscapes with high mountains, glaciers, and lakes.  Walking there is a great way of acclimatising before attempting a summit, as you will go through 5000m passes.

The most common hikes are :

More information on the maps below : 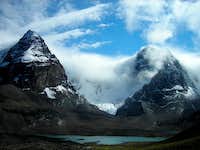 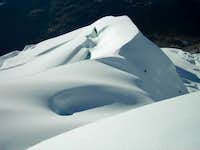 For climbing purpose, I would suggest two other books :
Bolivia : A Climbing Guide (Yossi Brain)
The Andes : A Guide For Climbers (John Biggar)

The right choice for a map is undoubtedly :
Cordillera Real, North / Illampu (Bolivia)

As far as weather forecast are concerned :
BBC Weather for La Paz

There are plenty of hotels and agencies in La Paz.
We were really happy with the ones we chose. If you want to add other adresses as a comment, feel free.
Hotel Fuentes on Linares 888 (20 USD for a double room with hot shower and cable TV)
Agency Alberth Bolivia on Illampu 773 (can organise all sorts of treks and ascents in Bolivia, for a very competitive price)