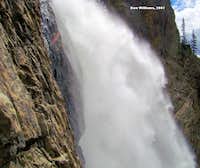 This is a 1700’+/- ascent day.. The Takakkaw Falls route is nothing to write home about…...sort of a sleeper really if it were not for two amazing features: You are climbing right next to the 2nd highest waterfall (1260’) in western Canada and the “so called” 11th pitch involves a 200'! tunnel crawl. The “Takakkaw Falls Route” was put in by Bernie Schiesser and Sid Marty in 1966. Sid Marty, a Park Warden at the time, detailed the experience of putting in the route and discovering the cave in his book, “Men for the Mountains” published in 1978. Takakkaw is derived from a Cree word meaning “it is wonderful”. 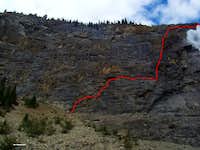 The route starts well left of Takakkaw Falls and eventually, via pitch 8, abuts the falls on the way to the north end of the tunnel. Once you navigate through the tunnel, you will be right at the top of the falls (mist and all) and will have one short pitch left to top out at the Mount Daly glacier melt flow forming the creek that feeds Takakkaw from above. From the parking area for Takakkaw Falls in Yoho National Park, follow the paved trail past the restrooms and across a bridge following the tourists to the base of the falls. Continue up scree to the left side of the falls and follow the wall left up to the top of the scree cone. The route starts via broken ledges below a bolt on the right side of the apex of scree. You will see bolts prior to reaching this point, but that is a current (2007) project of sorts.

The belay and rappel stations are all bolted and the route goes easy for the grade with some fixed protection. Minimal gear is required. As almost always, double ropes are highly recommended for the rappel, however you can rap the route with one 60m rope. Make sure to bring your headlamp for the 60m tunnel passage. 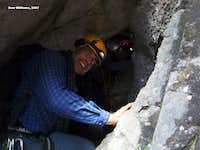 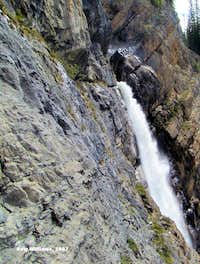 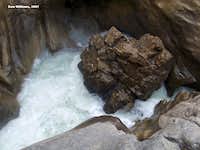 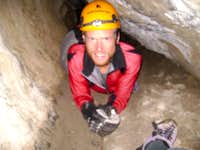 1st Pitch- 40m- 5.4/ Just right of the top of the scree cone, angle right on easy ground along a ledge system past three bolts and a piton into a short chimney/corner feature and ascend it moving right again to a comfortable belay ledge.

2nd Pitch- 15m- 5.4/ Ascend a steep loose section just up and left of the belay to another belay station on a narrow ledge.

3rd and 4th Pitches- 100m- 3rd/ These two really are not pitches, although labeled as such at Tabvor.org, nor did I feel they were 4th class as described. Traverse right over easy ground along the narrow ledge towards the falls. You can short rope this if you wish and clip into bolts along the way including a station which we bypassed. Once you get to some wet limestone slab below a significant rising dark pinnacle, set up a gear belay to the left in several cracks.

5th Pitch- 40m- 5.5/ Ascend where you can find dry slab (probably a bit left) on well featured, but run out, textured limestone. Once past the next ledge, move right past a rappel station and continue up to the base of the dark pillar above. There is an old chain station in the wet corner beneath this pillar, but look for a much drier fixed belay out left below a left facing corner.

6th Pitch- 35m- 5.6/ Ascend the corner past a fixed piton to the next belay above in an alcove of sorts.

7th Pitch- 40m- 5.5/ Continue up the same corner past a rappel station and up easy ground to the right on top of the dark pinnacle to a fixed station. The “rooster tail” (huge kick out) of Takakkaw Falls will now be in full view to your right and more than likely dumping some spray your way.

8th and 9th Pitches- 55m- 5.6/ I combined these two pitches, no worries. The best pitch of the route. Climb fun ground straight up, slightly angling left on the 5.6 portion past three bolts. You won’t be able to communicate with your belayer beyond this point due to the thundering noise from the falls. As the waterfall rumbles past you on the right, continue up to a ledge and past the 8th pitch belay on easy, but loose and unprotected, shale to the 9th pitch belay on the next ledge up.

10th Pitch- 25m- 5.5/ Angle up left towards the mouth of the north end of the cave. Follow a shallow groove on the left that leads to a station at a flat area just right of where you enter the cave.

11th Pitch- 60m- Cave/ Again, not really a pitch (as you are not gaining any vertical here), but called one in the on line published route description at Tabvar.org. This climb would not be worth doing, falls and all, if not for this cave experience. If you tend to be claustrophobic, you might have an issue with it, otherwise, if they could package this experience, it would be a big sell at Disney World. Fun times crawling at first on your knees (take some knee and elbow pads if you are smart) and then demoted to your belly deeper in the cave. It will be pitch dark at first, so a headlamp is handy. Make sure to put away your gear and ropes so as to not get them muddy from the cave floor. I recommend removing your pack and dragging it through. It feels at one point like you are descending as you hear the roar of the waterfall at the south end, but no worries, you exit at a very comfortable ledge just left of the top of Takakkaw Falls. What a position, even by Canadian Rocky standards.

12th Pitch- 30m- 5.6/ I guess folks don’t always do this pitch, but they should to say they completed the route and to see the source of the falls, if nothing else. Angle up fairly easy rock with large holds as it moves left and tops out amongst some trees with rappel tat (only takes a one rope rappel from here versus the published recommendation of a two rope rappel). Bring up the 2nd here and then continue scrambling up easy terrain to the source of the falls, the glacier melt from Mount Daly….a pleasant stream creating tons of froth as it starts making several aggressive dips to the falls below.

Take a single rope rappel off of the before mentioned tree back to the south end of the cave. Reverse the cave. You can rappel the route on one 60m rope, but two would make life easier as always in the Rockies. There are tons of stations. We rapped 50m back to the top of pitch 8. Then a 45m rap to a rappel station that we passed on pitch 7. Then we made it all the way back to the narrow ledge with one rap despite the topo we used suggesting it was 65m. Then return the narrow ledge and make one more double rope rap from the top of pitch 2.

I would solo the route, so I am not the best to ask about gear on it. There is quite a bit of fixed protection, particularly where you need it, so I advise going light with pro, whatever that means to you. A handful of draws and runners. Helmet, rock shoes, etc. Headlamps for the cave. Knee and elbow pads would have been nice even though we got along without them. We used double ropes which I always advise on longer routes. Also helps considerably with rope drag. You can leave your shoes at the base of the climb as you will rap right back down to that location.