The Aftermath, Josh's accident in the Canadian Rockies

Have you ever seen a fellow climber fall down a mountain slope? I have. Six times. Perhaps it was your friend, or someone you know. Have you ever seen someone hit by rockfall? I have. Four times. Have you ever triggered an avalanche? I did once. In the last 10 years of outdoor exploration I have ascended 650 peaks and during that time I have witnessed about 10 injuries. Three of them were serious, but only this one was life threatening.

It's no fun bandaging up a bloodied friend or helping someone hobble down a peak. For those of us who travel in the mountains, certain objective hazards pose higher risk and claim lives on a regular basis. These include but are not limited to avalanche, cornice, and rockfall. We do what we can to minimize this risk but it's not going to keep us at home on the weekend watching the TV. On Mount Cory, in August of 2014, I triggered a large rock which nearly killed one of my best friends, despite our attempt at precautions.

The following is an excerpt from the first hand account I wrote shortly after the accident.

With my right foot I barely touched a large boulder, 3 feet by 1.5 feet by 8 inches. It took off down the slope immediately like it had been set with a hair trigger. I yelled "rock" and watched in horror as Josh moved quickly back to the left, directly into the fall path. It all happened within a few seconds. The rock bounced a few times and struck him in the back of the head and then plowed over him. He fell down and tumbled out of sight, 30 or 40 feet below.

I couldn't believe what I had just seen. For 2 seconds I was stunned and reeling mentally, not wanting to accept it. Then I went half out of my mind with fear for him. I started screaming, “OH MY GOD!” and carefully scrambling down to look for him, yelling “JOSH”. I was yelling and he was not responding. I kept screaming for several minutes, not even sure of what I was saying. I’ve never been so insane with fear for someone.

When I got to him after a few minutes, he was sitting up and covered in blood...

After Josh came to his senses we were able to get to the hospital in Banff and then he was transferred to the hospital in Calgary where we stayed for 3 days. His injuries were numerous.
In the days following the accident I stayed with Josh in the hospital. I watched him undergo several painful procedures, all the while keeping a positive and cheerful attitude. How does he do that?

So if you think that was bad, now we get to the really ugly part. Josh is still recovering from this accident. He has had to temporarily drop out of college to focus on his recovery. In his time of greatest need, his Medicaid insurance refuses to cover any of his Canadian hospital bills on the grounds that he was out of the country. I once fought a 2 year battle with Premera after having unexpected surgery in Switzerland and finally won with the help of some family friends in the insurance business. I tried to encourage Josh with my story and tell him not to ever give up the fight. I put him in contact with my family and friends who helped me. Josh diligently fought the insurance battle. But after 5 months of phone calls, forms and correspondence, Coordinated Care made their final decision. They will not pay a dime. If the bill for $11,300 is not paid, it will be sent to collections.

Now for a word about Josh's financial situation. I need to make an important point here but I want to maintain respect and dignity for the Lewis family. I have known Josh and his family for 8 years. In that time I have watched them scrape along and make ends meet in the most impoverished way. At any given time, Josh and his brothers might have a few dollars or even only a few coins to their name and nothing more. Their parents are in no position to provide financial support. They subsist on aid. But Josh has been a man with a plan. He is going to rise above these circumstances. For several years he has been working toward a Web Application Developer ATA degree. He has applied that knowledge right here on SummitPost, much of it behind the scenes. We should all be grateful for the work he has put in here. 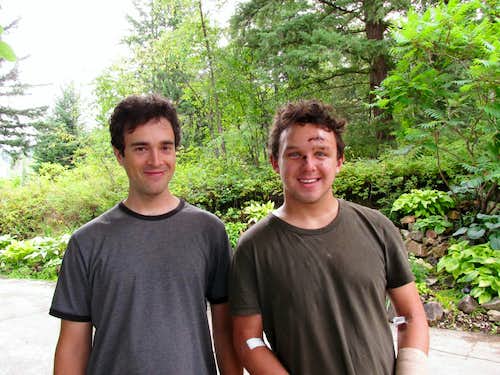 After Release From The Hospital

Josh is in a financial bind that could be detrimental to his future. One of Josh's friends has started a fundraiser for him in hopes that we can free him of this debt which he and his family is unable to pay. I'm going to start by giving what I can. We are reaching out to the community to give what ever they can to help Josh pay off this debt. Together we can do what he cannot do alone. Thank you everyone who read this article and to those who have shown their support. Whether it be words of encouragement, prayers, visits, donations, or best wishes. Josh is extremely grateful for your support.

View Fundraiser Here
If you would like to read more about the accident, you can find it here on SummitPost.

So very sorry about the bind

I know his situation. I had two surgeries within 12 mos but two calander years, and even though I have VERY good insurance, I was still stuck with $12K+ in bills, because when you have a neurosurgeon, an orthopedic surgeon, and 2 other doctorts assisting in the surgery, inevitably one or more will be out of network, and whemn you are told you need surgeery now or you may never walk, you don't think about asking if the assisting doctor is in-network... I am so very sorry

Insurance is such a joke

The insurance industry is the biggest scam in America today, bigger than investment banking, bigger than for-profit education, bigger than congress. They are literally profiting from people's misfortunes - the less they help their customers the more money they make. Maybe if more people saw it this way we could vote out the people who wouldn't let us have free healthcare like Canada and most of Europe and our most financially insecure would not get screwed over. Anyways, that's my little rant on the topic. I really hope it works out, our country may be fucked but I don't think our people are quite that far gone yet.

Have you consulted a lawyer?

I'm no fan of insurance companies either, and sometimes it takes legal involvement to get them to pay for what they've promised. I am an attorney but this is not really may area, so I don't know if there's a possible case to be made or not. But it couldn't hurt, if you think there is a legitimate chance for coverage. The situation is complicated by the involvement of Medicaid, as the U.S. government is virtually impossible to sue. Nevertheless, it can't hurt to scour every single insurance document to make absolutely sure the denial of coverage is legitimate under the contract docs. A lawyer is the best person to do this.

In the meantime, my thoughts are with both of you. I know Josh will get through this ordeal. And, he is still very young, and will likely grow from this admittedly horrific experience to become an even better person than he already is. Given his amazing contributions here, he is sure to be a success no matter what area he decides to pursue.

Re: Have you consulted a lawyer?

Yeah, insurance companies are the worst sometimes. Josh and one member of my family have been extremely diligent in their fight against the insurance company as well as the search for possible legal action. They spoke to several legal advise people who worked in Canadian/USA law and everyone said that there was no way Medicaid would pay for this particular situation. Thank you for your suggestion.