Until comparatively recently virtually nothing was known about a rumoured hidden alpine paradise in central Vancouver Island, BC somewhere to the north of the road between the mill town of Gold River and the west coast village of Tahsis. A range of rugged snow capped mountains was obvious from the coast – and, indeed, had been long used as marine navigation aids – but only as recently as 30 years ago, climbers had yet to penetrate the thick bush and steep cliffs that surround the massif on all sides.

Finally in 1979 and 1980, Island climbing legends Syd Watts, John Gibson, Paul Erickson, Robie Macdonald and others made forays from the northeast via Sebalhall Creek and from the west via the Perry River and on the second trip Macdonald and Erickson were able to climb to the summit of Mt Alava. From the summit they were able to look down on a series of glaciated valleys surrounded by the massive barren red rock walls of several major peaks. Cradled between the mountains were two lovely green/blue lakes. It was a scene unlike anywhere else on the Island, almost as if the glaciers had only just retreated.

I’ve yet to learn exactly who coined the phrase and when but it wasn’t long before this unique and breathtakingly lovely area became known to all as “The Sanctuary”.

Thirty years on and the Sanctuary remains a little visited place. The land belongs to the Crown and enjoys no formal protected status. Although logging has penetrated far up the Perry, Sebalhall and Conuma (to the south) watersheds, the natural defenses of the Sanctuary are formidable and, so far, have remained intact. To go there is a unique and privileged experience. 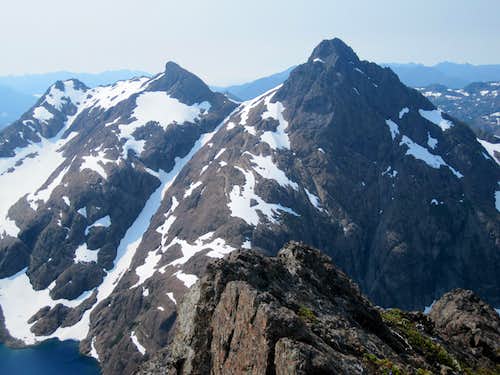 The southern limit of the Sanctuary is located about 10 km northwest of the junction of the Gold River/Tahsis (Head Bay) Road and the Conuma Main logging road and is, perhaps, 25 square kilometers in area.

The Sanctuary encloses the headwaters of two watersheds. A tributary of the Perry River flows northwest out of Peter Lake and down to Alava Lake between the walls of Mts Alava and Grattan. The Conuma River has one of its origins in “Shangri La” Lake which is found below the north aspect of Mt Bate and the south aspect of Thumb Peak. The river flows out of the lake southeast down the canyon between Mt Bate and Tlupana Ridge. A low col between Shangri La and Peter Lakes separates the two drainages and I have set the coordinates of this point as the centre of the area.

As with many of the mountains of Vancouver Island, the geology of the Sanctuary has its foundations in volcanic activity. Granite is in considerable evidence (and, where found, is loose and crumbly) but the predominant rock type is karmutzen pillow lava. It is this that gives the sheer rock walls surrounding Shangri La and Peter Lakes their distinctive red/brown hue. Rough textured, solid and grippy, climbing karmutzen lava is like climbing on Velcro. 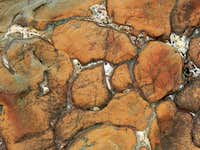 Karmutzen pillow lava
The Sanctuary comprises a compact but rugged area. Distances between objectives are short but travel times and effort are considerable. From camps at Peter or Shangri La Lakes, almost everything is a full day trip.

Vancouver Island can be reached by air from Toronto, Vancouver, Seattle, Calgary and Edmonton to Victoria, Nanaimo, Comox or Campbell River and by ferry from Port Angeles to Victoria on The Coho and on BC Ferries from Vancouver to Victoria or Nanaimo. Public transport on the Island is notoriously poor and anyone arriving by air would be advised to rent a car.

Access to the main points of entry to the Sanctuary involves logging road travel but on main lines. A 2WD vehicle would normally be expected to suffice.

Although, and as described above, the Sanctuary has been approached from the north via Sebalhall Creek, the main points of access are off the Gold River/Tahsis Road and only these will be dealt with here.

From any point on southern Vancouver Island, drive north on the Island Highway 19 to Campbell River. From Campbell River take highway 28 west through Strathcona Provincial Park and onwards to Gold River. Just before entering the town of Gold River, watch for a right turn signed for Tahsis. It’s immediately after the tourist information office. Proceed 2 km on this road and across the bridge over the Gold River. Here the road splits. Right to Woss and left to Tahsis. Note this point on your odometer and turn left onto “Head Bay Road”. The pavement ends almost immediately, but this is good sealed or gravel road.

Drive about 27 km from the Gold River bridge and find Conuma Main on the right just after crossing the Conuma River. Drive this good main line about 11.5 km, passing the C15 access for Conuma Peak after 3.5 km and park at about N49 52.403 W126 24.954. The route to Shangri La Lake via the Conuma River approach starts here. Mt Bate towers above you to the northwest.

For the Perry Creek access to Alava and Peter Lakes continue 22 km past the Conuma/Head Bay junction and find Perry River branch road P15 on the right. Drive the road right to the back of the valley to where the creek crosses the road.

Both approaches described below involve heavy bush and difficult travel particularly via the Perry River. These difficulties are in no small measure responsible for the few visitors that the Sanctuary has seen over the years.

Follow the creek through dense bush into a steep sided canyon. The route makes its way up rock slabs before reaching Alava Lake. Continue up to Peter Lake on the opposite side of the river. This route has been included in the list of top ten bushwhacks on Vancouver Island, which is saying something. Don’t say you haven’t been warned!

Over the years a number of visitors have accessed the area via helicopter. The local ecosystems in the Sanctuary are delicate and fragile and, in this case, an air assist might just be the least invasive way to reach and stay there. See the “Camping” section below.

The following table summarises the principal summits that surround and define the Sanctuary starting with undoubted jewel and highest peak, Mt Bate and proceeding clockwise from there.

Further details are then given in the separate mountain pages and obtained by clicking on each live link.

Three main lakes in the valley bottoms and countless tarns everywhere impart additional beauty to what is already an area with an overabundance of that quality.

Shangri La Lake
Alava Lake and Peter Lake grace the western half of the Sanctuary whilst, arguably the loveliest, Shangri La, which doesn’t even have an official name, lies 250 metres above Peter Lake to the east and across the drainage divide. Shangri La is additionally blessed with acres of flower filled meadows at its eastern (outlet) end which make it an idyllic camp spot. The name becomes rapidly self-evident on first sight! 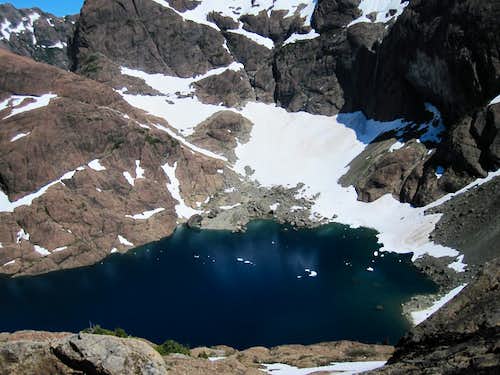 Unless you’re supremely confident in your abilities to look after yourself come what may, I would consider a satellite phone mandatory for trips into this wild and remote area. Make sure that you have left a detailed trip plan with someone responsible. The appropriate SAR agency will respond in an emergency but it is up to you to have the mechanism in place that will initiate the call-out process if it becomes necessary. Know your exact coordinates at all times. Consider personal limited range radios for communication within your group.

Most visitors camp at the outlet of Peter Lake or on the extensive gravel flats at the outlet end of Shangri La Lake. These, and anywhere else in the Sanctuary, are areas which are delicate in the extreme. Fires are absolutely out of the question – there’s no wood anyway. Tread carefully amongst the acres of flowers. Try to keep your footprint as low as possible.
Low to non-existent soil levels mean that disposal of human waste is a super critical issue. Above all other reasons (e.g. to avoid the difficult approach conditions) flying out waste and garbage is a strong argument in favour of keeping the area pristine by means of a helicopter assist and several parties have done just that.

As in the case of many objectives on Vancouver Island, Lindsay Elms, our local guru on all things obscure and hard-to-get-to, has written an excellent historical and geographical perspective of The Sanctuary on his Beyond Nootka website. Don’t fail to visit this site before your trip.

The map for this trip is the government 1:50 000 topographical map sheet 92-E/16, “Gold River”. Advance copies can be ordered on-line at this link. Copies are usually readily available in good bookstores and outdoor stores throughout the Island.

Be aware that many features of the Sanctuary are mislabeled on the government map. Mt Alava is placed where the lower south satellite is located and Mt Bate is, in reality, located some 500 metres to the northeast of its map label.

Sitting on many Sanctuary summits with my GPS I was almost always located on Garmin’s maps 70-100 metres away from where I was actually sitting. 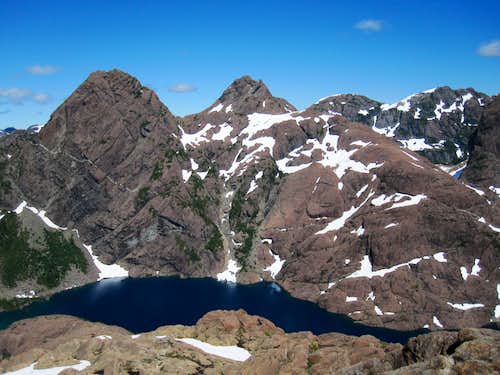 In the text you ask who called this the Alava Bate Sanctuary. For the record is was I - I proposed it as a park back in the 1980s when there was a spate of activity to designate some new Provincial Parks. I put some text down, drew a proposed boundary around the region and, since it seemed so appropriate and still does, called it the Sanctuary. Alas it did not make the cut. I think the Gowlland Range got designated at that time, though, and maybe Arrowsmith got on the radar. Rob Macdonald