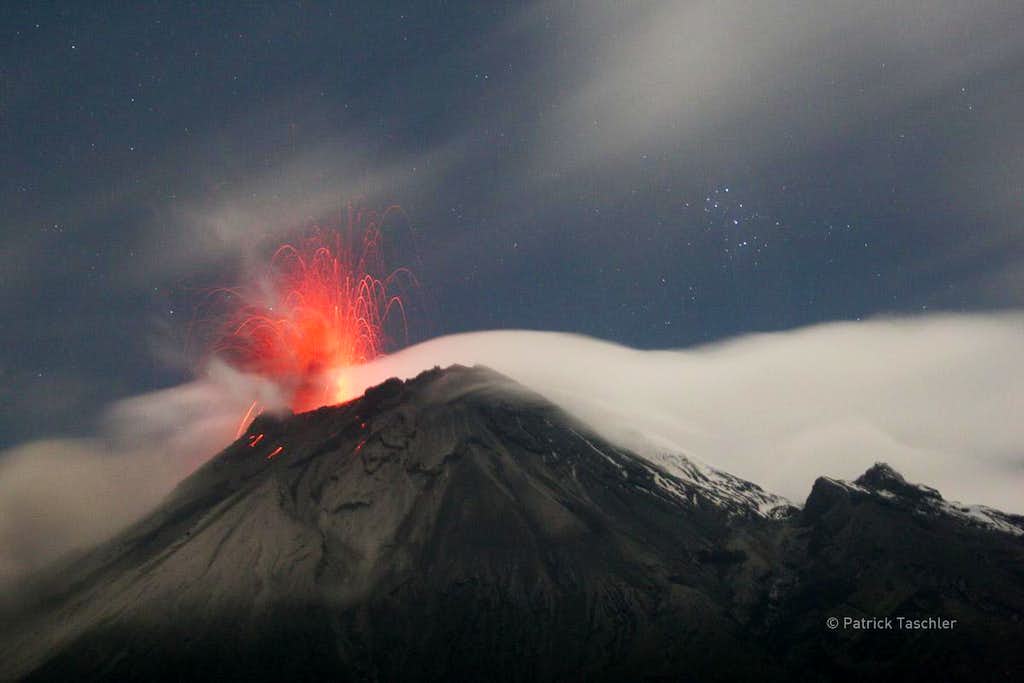 Tungurahua's deadly eruption. I decided to head for Ecuador, driven by my love of mountains and an insatiable urge to travel. I got more than I bargained for when I arrived, because I discovered that the Tungurahua volcano, located around 80 miles south of the country’s capital Quito, was about to erupt and was spewing dense smoke and lava. I approached it from the west, which was said to be the good weather side, since the clouds generally roll in from the east/amazonas. The road I was on ended at Puela, a little town at the western slopes of the volcano. Night fell and the clouds dissipated and I found myself staying up all night to observe and to take pictures. I’m quite a fan of astronomy and so I realised that the star cluster M45 (pleiades) was about to appear in the night sky on this moonless night, and that it would emerge more or less behind the crater. That’s exactly what happened,I took my picture using a Canon D20 and 70-200mm combination, with an exposure time of around 20 seconds. It was a difficult shot to take, thanks to the humidity and the fact that ash was falling fairly liberally around me: my camera is now worth half its price! The next morning I started my walk along the flanks of the volcano to reach Banos: there had been a road, but much of it had been destroyed by lava flows. The villages I passed were semi-deserted and the vegetation was covered with ash: all the time what really scared me about the volcano was that it was so quiet....no explosions, and my fear was that something was building up. Time, I told myself, to get out of here! The following night the villages of Bilbao and Penipe suffered heavy damage and those of Chilibu, Chogloctuz and Palitagua got wiped out.
« PREV NEXT »

Seeing a volcano erupt like that is a thrilling experience. I had the pleasure of watching Mt. Yasur erupt up close last summer.

Could you make a TR

with a few more shots? And also, there is an album of low-light photography, by rayray. I have a feeling that your shot might become one of the top images there if you attach it.

this is an awesome shot,

very dynamice, I like that. Plus it has a lot of information on it, a perfect contribution. I hope it gets more attention (would make a great POD).

You should attach this photo to the Tungurahua mountain page.

This a really great photo with a good story and fine informations. Congratulations!!

We saw this volcano back in early June, it was only smoking. We were hoping for more action... you had action, good for you !!
Splendid shot (^_^)

Thanks for sharing a really nice image, Patrick, and for writing an intriguing caption. I too am an astronomer and have gotten a couple nice shots featuring the night sky (like this one). It's one of my favorite things about going to wilderness places! --mark d.

Superb photo of one of my favoirite volcanoes. I was fortunate to climb it 1994 and in 1999 several months before it sprang back to life. Well done and thanks for posting! cugel

Excellent pic! What day did you take it? I never got to see the volcano when I was there in July. Cheers!

What a great shot and perfect timing. This is really spectacular! Thanks for sharing and providing the beta.

Thanks for explanation - it looked too good to be true - great photo!

I didn't notice the star cluster until reading the caption... just when I thought the photo could not get any better! it did!
Ralph

this eruption of volcano!
Cheers
Hiltrud

Great shot with an even better description. There isn't much better than staring at molten rock. It's one of the most visceral things I have ever experienced. Thanks for sharing your adventure.

Can't imagine a more potent explosion or a more dramatic picutre. ...Huge blocks hurling through the sky like mere Lincoln Logs, noxious gas wafting about driven by superheated cyclonic winds---what a foto, what a journeyman, Love it 10/10

Your patience and expertise paid off big time!