Tungurahua 5023 m, Ecuador's 10th-highest peak, is a high active stratovolcano located in the homonymous province. This steep-sided volcano towers more
than 3 km above its northern base. It sits about 140 km South of Quito, the capital of Ecuador and is one of Ecuador's most active volcanoes. The eruptions have been accompanied byvstrong explosions and sometimes by pyroclastic flows and lava flows that reached populated areas at the volcano's base. The last major eruption took place
from 1916 to 1918, although minor activity continued until the year 1925. The latest eruption began in October 1999 and initially prompted the evacuation of the entire
town of Baños on the N side of the volcano.

Tungurahua is also known as the "The Black Giant", actually the word "Tungurahua" means "burning throat" in Quechua language.  Tungurahua has a 600 ft. (183 m) wide crater. Most of the volcano was covered by snow, but now the snow cap is largely reduced.

It is nowadays dangerous to climb (since 1999) as its increased volcanic activity has unpredictable eruptions as a consequence. You do not want to be caught on the volcano when major explosions of gases, ashes and lava occur! When the volcano increased its activity in 1999, the ice cap melted away and the peak is since then ice free.
During a long period starting from the year 1999 the climbing of the volcano was prohibited as dangerous due to repeated eruptions. In spite of this many people still attempted to climb the volcano. In September 2016 Tungurahua area officially reopened, there were rangers up there at the entrance and the ascent was possible - same regulations apply as for other Ecuadorian mountains >5k. The Refuge was re-opened, but without the manager, climber had to bring their own food etc. but could sleep there (mattresses) and use the stove (gas) for USD 5,-- per person.

According to the latest information, currently (February 2020) it seems that the western side of the volcano is collapsing, therefore it is necessary ALWAYS check with locals about the mountains condition. The researchers advise to carefully monitor Tungurahua in order to predict the eventuality of a landslide sufficiently in advance. Furthermore don't be fooled by descriptions of this mountain as "easy."  People have died on this mountain and you need to be in good physical condition to climb it and enjoy it.

The town of Baños (20.000 inhabitants) is is the reference center for climbing Tungurahua. It is located 25km from the province capital Ambato. It's easy to reach by bus from all over the country as it's a main tourist spot. The bus from the capital Quito takes 3,5 hours.
You can start walking from Baños (this is a very long option): follow the road on the Ambato side of town, then take the first trail to the right of the store and follow this path to town of Pondoa --don't follow the road to the baths.
Alternatively you can hire camionetas (small trucks) in Banos to take you to Parque Nacional Sangay where Tunguraghua is located. The camionetas will take you to the entrance to the park.

Walking to the refuge

The trail from the Park Entrance to the refugio is obvious and well-marked but fairly steep and takes 3-4 hours.

After having spent the night in the refuge, as early as possible head for a summit push. It is best to leave at 3 or 4 am in the morning. The last portion is tough as you trudge steeply upward through deep volcanic ash.

Descending to the Refuge is then only around 90 minutes and a further 2 to 3 hours walk back down to the entrance of the park.

Baños, at 1800m, is still the main entry into the climb and you will enter initially Sangay National Park which encompasses the Volcano, normally you'll pay $10 but if on a single day trip the fees are not charged. I have climbed the volcano in the year 1991, but some friends of mine came back in July 2003, and when they entered the National Park the office on the mountain was closed and deserted.
Most guides/climbers depart early in the morning from the refugio between 3 to 6 am for a 4 to 6 hours climb to the summit with the last hour through snow and ice parts usually requiring ropes to keep ones grip as the gradient is severe in parts. The glacier is small and represents only the final 40 minutes of the climb. Crampons are recommended. The rest of the climb is scree and demanding, especially if it is muddy.
Descending to the Refuge is then only around 90 minutes and a further 2 to 3 hours walk back down to the entrance of the park

Best months for ascent to Tungurahua are from December to March for clearest views, but the weather is as unpredictable as Ecuador itself. 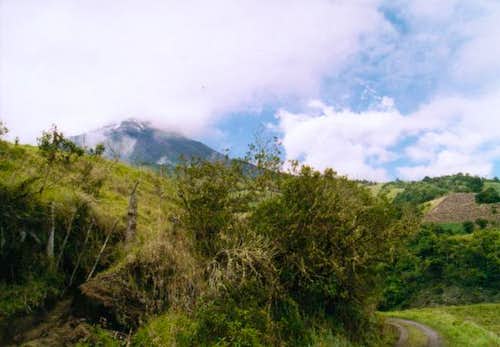 The Refugio (3800 m) is around 4 hours ascent from the Park entrance and has two structures. One in stone housing 40 persons and one wooden slightly warmer. Don't forget your sleeping bag or hammocks. Cost is $5 per person.
Altough there were rumours the refuge has been destroyed by the eruptions it's still standing and OK.

The Refuge building has gas and rainwater for guests to use (usually).

About the volcanic activity: Smithsonian Institution

To bad, but you're not allowed to climb Tungurahua at the moment (February 2010). In fact, it's illegal to do so. They've even put signs at the bottom of the volcano.

In September 2016 Tungurahua area officially reopened, there are rangers up there at the entrance and you can climb - same regulations apply as for other Ecuadorian mountains >5k. Refuge is open but nobody is there, you have to bring your own food etc. but can sleep there (mattresses) and use the stove (gas) for USD 5,-- per person.

For more information and a good wikiloc go here! https://hikeecuador.wordpress.com/2018/02/14/tungurahua/