The Black Tusk is an ancient volcanic plug exposed by the outer volcano being eroded away. It is a classic landmark from the Whistler Ski Resort, and from BC Highway 99. Located in Garibaldi Provincial Park, it lies north of Mt. Garibaldi, which is a dormant volcano. It also overlooks the strikingly beautiful Garibaldi Lake.
As such an alluring objective, the Black Tusk is one of the most frequently climbed objectives in the BC Coast Range. The approach is on one of the finest trails constructed anywhere, and although the approach hike gains some 1650 meters (5,300 feet) to the base of the scramble itself, the trail is in such good condition, and it is so well graded, that the miles (or km) go by very quickly. A party in decent physical condition should make very good time on this trail.
There are two summits on the Black Tusk. The scramble (false) summit, which is just about 20 feet horizontally south from the true summit, is a Class 3 scramble that is frequently done. The scramble itself includes an aesthetic chimney climb up fairly solid rock, then an exposed ridge route on loose rock. It will be a very exciting and worthy summit. The true summit, just a short stone's throw away and 10 vertical feet above the scramble summit, is very infrequently done. It lies across an exposed chasm of Class 5 rock. Old runners can be seen dangling from the true summit from the scramble summit.
Whether you reach the true summit, or the scramble summit, the views of Mt. Garibaldi and the Tantalus Range to the south, and the Whistler area to the north, are outstanding. 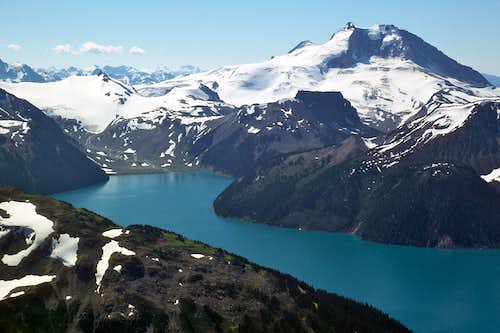 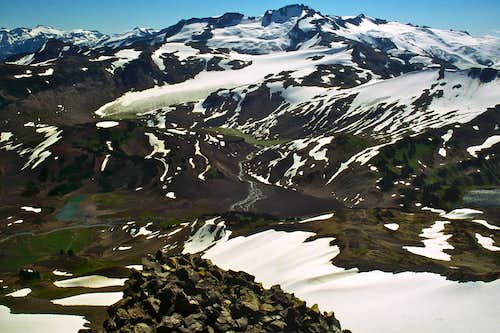 Looking over North side of summit

From West Vancouver, drive Trans-Canada 1 to its western terminus at Horseshoe Bay, and get off at Exit 2, which is the beginning of the The Sea-to-Sky Highway (BC-99). Drive through the small city of Squamish, and continue another 30 km until you see a sign on the right for the Rubble Creek trailhead. Drive the paved road 3 km to the trailhead parking lot ( elevation 590 m). 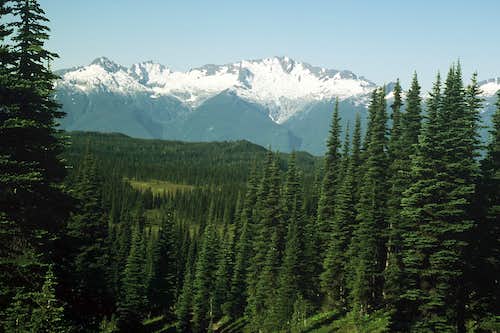 The Tantalus Range from above Taylor Meadows 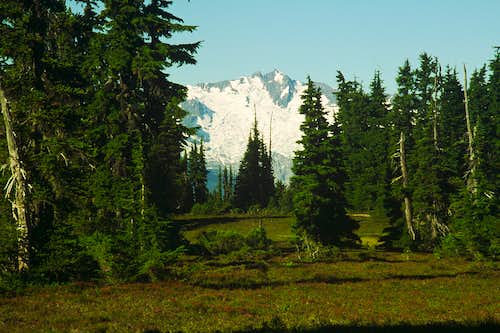 The trail up to Taylor Meadows is one of the best constructed anywhere in the world. It has markers every kilometer, and is incredibly smooth and wide. Hike about 6 km from the parking lot to a junction, where you head left toward Taylor Meadows (the right fork leads to Garibaldi Lake). From here, the ancient lava wall, known as "The Barrier", which dammed and created Garibaldi Lake, is visible to your right. At around 7 km, the trail breaks out into the expansive and lush Taylor Meadows and views of the Black Tusk appear straight ahead. There are excellent views back over your shoulder towards the Tantalus Range in general, and Mt. Tantalus/Dione in particular. Go left at the next fork which has a sign "Black Tusk 2.5 km." The trail now climbs up loose scree to the SE corner of the summit block. This is probably the end of the official trail, and you'll know it, because you arrive at a precipice of the summit block. Head left (west) along a way trail which will lead you past several gullies to the correct climbing gully. The crux of the climb will be finding the right gully.
The correct gully is hard to tell from this trail. There are no markers. Climb the last gully before the boot path goes around the SW corner of the summit block. If you miss the right gully, you'll find out soon enough, because the path becomes downright dangerous with loose rock. Climb up the gully, which starts out as a fairly vertical chimney for about 15 vertical meters. The climbing is easy and relatively solid, the old loose stuff having been cleaned out by the thousands who have come this way before. The gully lays back and one is walking through a ravine. Pay attention that another gully will intersect with the climbing gully at this point. You want to make sure you don't take the wrong gully down. At its end, jump out of the ravine and hike a trail up the western edge of the summit block easily (but exposed) another 60 meters to the false summit, 2315 meters (7595 feet). See the true summit, tantalizing close, only about 3 meters higher, but across a chasm of exposed rock.
Trip Stats: 26 km (16.2 miles) roundtrip. Difficulty: Class 3. Elevation gain: 1740 meters (5700 feet). Time to Summit: About 4 hours. 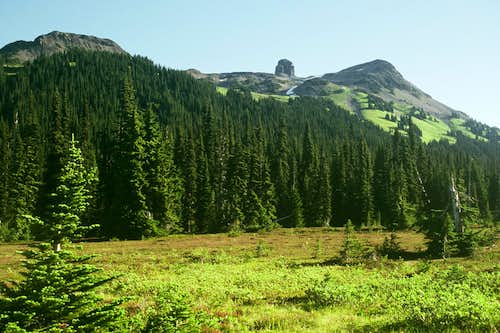 The Black Tusk from Taylor Meadows 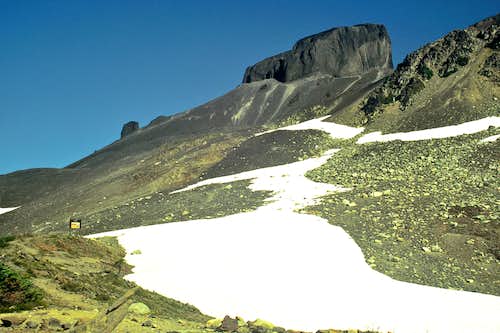 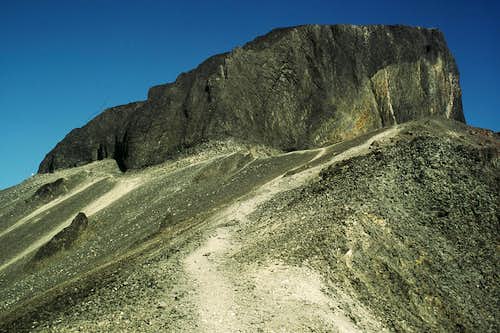 The Black Tusk from near Trail's End 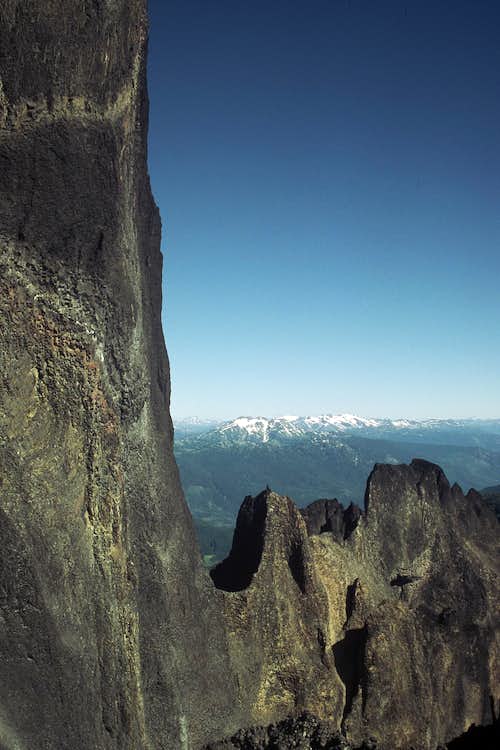 The Eastern Escarpment of Black Tusk 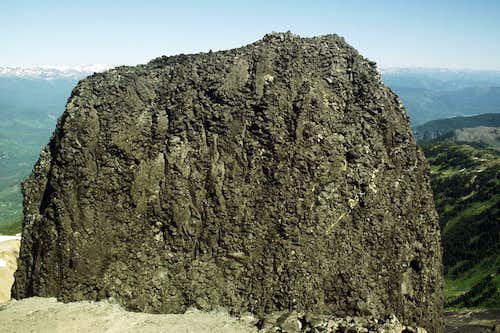 The true summit from the scrambler's summit

Late July to October is best. The Black Tusk is considerd a mountaineering objective in winter and spring. 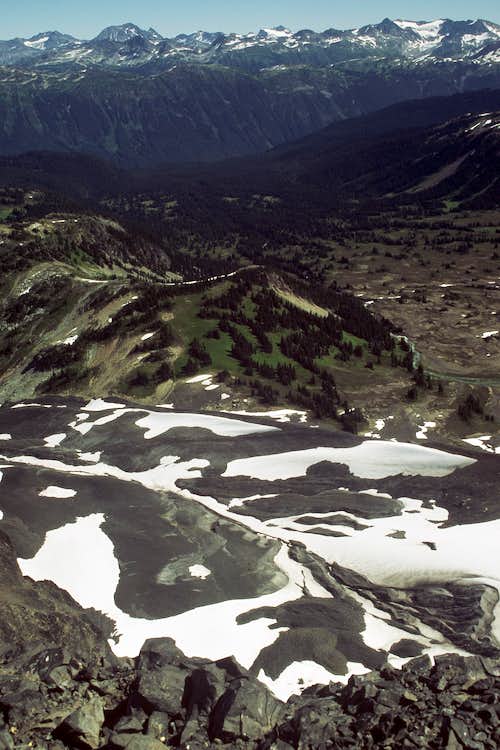 Looking towards the Whistler area 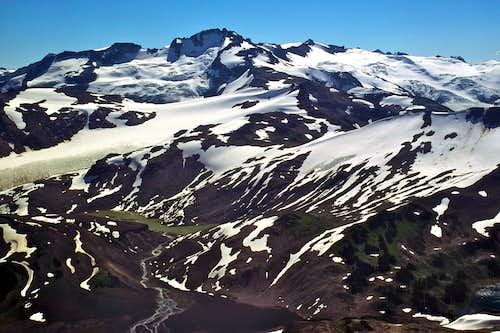 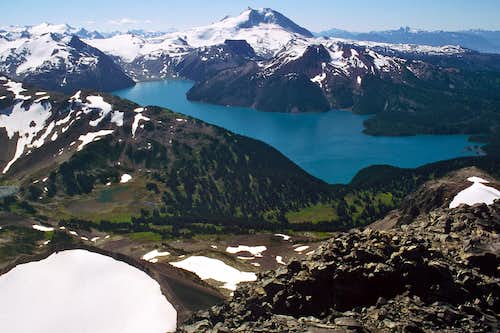 The owner of this page is inactive and the information contained herein is outdated and incorrect. If you have climbed this peak, please consider adopting the page to make corrections and updates. The page should state the fact that 99% of hikers who scramble up the peak do not reach the true summit. The top of the chimney scramble takes you to a false summit. To reach the true summit is a technical climb with serious exposure and requires rope(s). Only one person who has signed the climbers log actually went to the summit, Alpine72: "In order to really claim you have climbed this peak a rappel into a notch between the main summit and outers spire is necessary. I then solo climbed the rotting spire to the top shaking in my boots. I then rapped down and used ascenders to regain the main peak. All the while masive pieces of the mountain were crashing down and playing doctor dodge ball was the theme of the day." Also, the location indicated by the current coordinates is off by many kilometers. The correct coordinates are as follows, (49.975211, -123.042808).

Page has been reworked. Any suggestions would be welcome.

Excellent work! Great to see this fixed up after so much time.