Background info
"And David went up from thence, and dwelt in the strongholds of Ein Gedi" (Samuel 1 23:29).

From http://en.wikipedia.org/wiki/David:
"Saul gives David his second daughter in marriage, and sets him in command over his armies, (literally, 'commander over a thousand'), and David is successful in many battles. David's popularity awakens Saul's fears - 'What more can he have but the kingdom?' - and by various stratagems seeks his death. But the plots of the jealous king all proved futile, and only endear the young hero the more to the people, and very specially to Jonathan, Saul's son, who is one of those who love David. Warned by Jonathan, David flees into the wilderness."

It was the worst of times, it was the best of times.
And what the Dickens do we climb for anyway?

The worst of times was last June when Julian and I made our first feeble attempt at de-feeting the hitherto unclimbed Pk 5913 (433P) south of Mt. David. For that Julian-booted jack-booted excuse for a report, kick here.

The best of times was last Saturday, September 16—102 days since the first try. Three of us placed our six feet and six hands and three butts on top of Engadi on an overcast and mildly snow/rain showery day.

Back in June, Julian and I had tied to crawl (literally) along the back of the giant green panther (the ridiculously overgrown Panther Creek Trail) to climb this peak and we would have succeeded if it weren’t for Julian’s failure to grasp that oft forgotten law of climbing physics which states that “a boot intended to be thrown across a creek must reach the highest point of its parabolic arc at a point beyond the centerline of the creek.” This law was proved by steinEin back in 1922.

Shetter, Feller, and Klenke—three people with German names who believe that a last name is no place for the vowels a, i, o, or u but who sometimes wonder y we do this thing called peakbagging—set out on the Mt. David Trail at 7:50am. Since Stefan (F.) had his bike I suggested he ride the first mile of trail, which is flat. And so he did. But when we caught up to him as he was readying to go after stashing his bike, he was a little irked at my suggestion. The time he had spent stashing it equaled the time it took us to catch up with him. Yet, on the return he would be able to save time. Well, at least in theory.

The trail climbs 3,000 ft to the lower South Ridge of Mt. David in roughly 4 miles and we made it there in good time. I thought about my poor boot and I pushed pins into my voodoo doll of Julian the hooligan but I knew I wouldn’t be satisfied until I was on top of our objective. At the 5,240-ft ridge crest we left the trail and took to slipping and tripping down the steep west slope into the Ibex Creek drainage on the other side. Because the Panther Creek Trail is so overgrown, this is the shortest route, believe it or not.


Engadi Peak from our approach direction 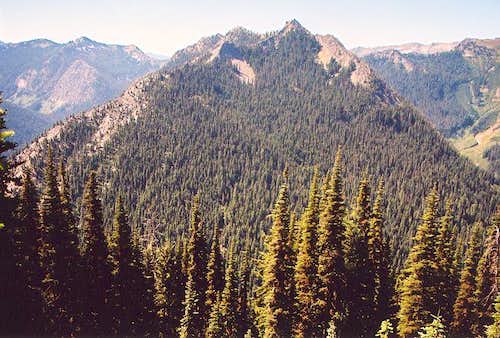 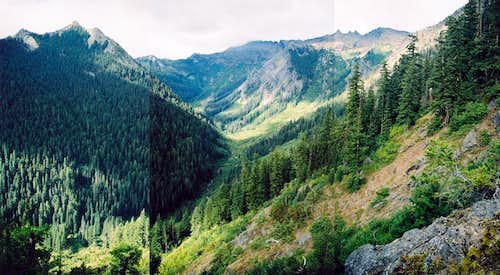 We descended down and right to the creek. When we came upon a wide ravine we kept to its south side mostly in open trees until arriving at the ibex-less Ibex Creek, now a weak and meager facsimile of itself from 100 days earlier. It was a 1,700-ft drop to the creek at 3,500 ft and we knew we’d have to regain that on return. Ugh. Oh yeah, in case you’re wondering, we didn’t spot the Engadi boot. We were way upstream of it. 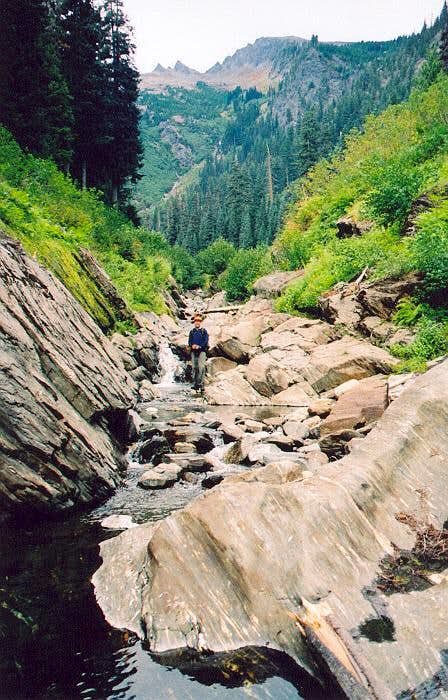 The following dialogue didn’t really happen like this. I’m stretching reality like every movie based on a true story does: “Ha ha, very funny guys. So you want to throw one of my new boots into the creek to give the Ibex a pair. Well, you should know that ibexes (ibexi?) have four feet and I only have two boots so we’d have to use one of yours to make four. Who's up for losing their boot with me?”

And then…
I must assert that there was no yew-phoria over the bash we had to commit to through a brush chaparral so wicked not even a yew-boat could shyewt its way through it. And I’m not trying to yew-talize a yew-phemism when I say we were so deep in yew doo-doo (that bastard evergreen of alders) that we were imploring each other for a yew-thanizing action—like a poisoned bottle of Yew-hoo. But if we were to all be dead, who would sing our yew-logy. A Yew-te? No no, yew are right: there is no real point to this paragraph. And I know I am straining to be punny so screw yew.

Okay, back to this woohoo hoot of a story…zzzzzzzzzzzzzzzz…snooooooooore…oh, sorry…anyway…

After a break at the creek brimming our water bottles with ibexcrement, we leapt into the deep forest northeast of our objective and proceeded to punt and pant our way up 2,400 vertical feet to the inevitable cragginess that crowns it. We were aiming for the north ridge finish because it looked feasible from afar. But we wound up too far left on the east ridge. 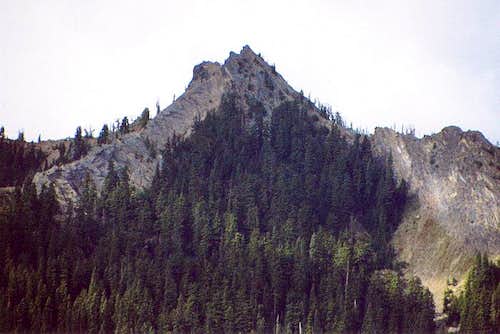 We were greeted on this crest by a knife-edge of slanted slabs of somewhat loose schist. Martin (S.) and I scrambled this crest rightward (west) while Stefan avoided it by way of a gully I pointed out to him. The crest was Class 3 and perhaps the most fun climbing of the day, but it ended before it began. 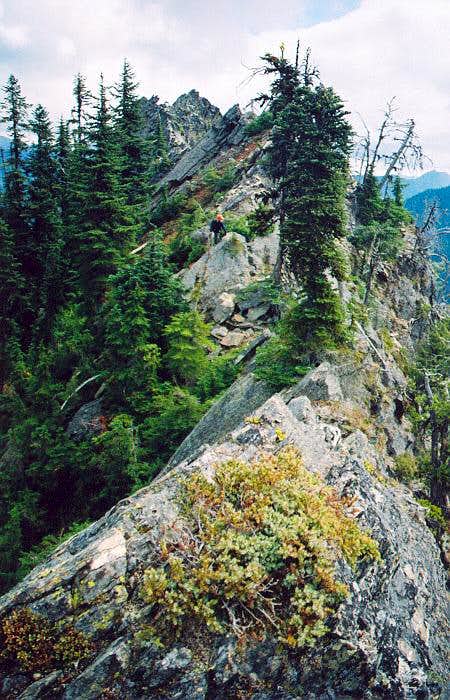 The crest ended at a notch where Stefan had worked his way up. We then climbed up a short step then stayed mostly just left of the rocky crest on the broken unpleasant Class 2/3 south slope. Other than two unappealing squeezes past well-placed snags, this part of the climb was unmemorable. 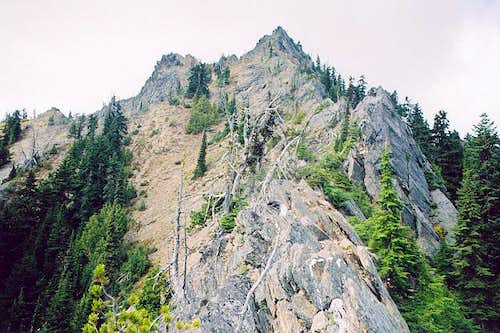 The final summit is a loose assortment of schist blocks hanging at an angle and mostly covered in lichen. I took a more direct line to the summit (Class 3+) while Stefan and Martin found some ledges just under the summit. Their ledges were easy but one step-up to gain them was Class 4 for me on descent.


Stefan on a ledge just below the summit 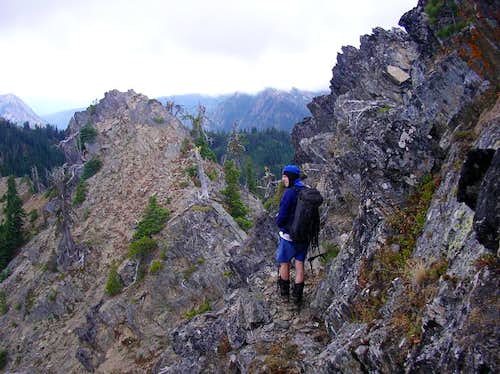 We had made the summit 4 hours and 50 minutes after leaving the car. 5,400 feet of gain. There was no evidence of a prior ascent (no cairn or register) so we hereby declare this a first ascent*. I left my own film canister register saying as much. We scanned the immediate environment for a cowering David but could not spot him (his head was in a cloud).

The weather wasn’t great (but not bad either). There wasn’t much of a view so we bid Engadi an adieu and climbed off the summit. I took their way off the summit blocks and asseverated that their way was most assuredly not easier than mine. So while I went down their way they went down my way. Does that satisfy loop-trip requirements?


His wife's truly and yours truly enjoying Engadi-land 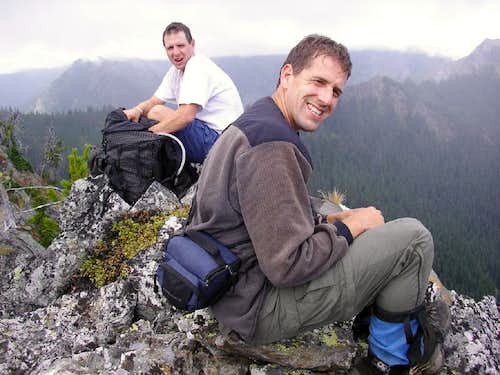 We downclimbed the south side of the east ridge to below a false summit crag and left the crest for a hard-pan gully paralleling it. Soon we were in the trees. And soon again we were back at Ibex Creek facing the daunting 1,600-ft re-climb back up to the Mt. David Trail.

Stefan the Animal went on ahead and veered leftward because he also wanted to scratch David’s back. Martin and I had already climbed David so deferred such displeasures. Martin and I were together to begin with but soon lost each other in the narrow and overhanging streets of a Yew-topia [oh, sorry]. I exited that ugly town for the high route but Martin chose the low sewer bushwhack instead. We eventually re-merged into a single street. Martin, don’t you know that other law of climbing physics: "the shortest point between two sides of a brush bash is always a long, curvy line."

We came upon a natural arch of rock just below the trail. This was cool. Other than that it was a lot of boring hiking. For Martin and me it was a 7,000 vertical foot day--we're no heroes; we're not Stefans.

We descended the trail and waited for Stefan. We waited and waited, forcing us to…egads (egadi?)…carry on a conversation. I had a rendezvous to make with a friend later that night and I was hoping Stefan would be coming along soon. But what can you do when you’re faced with a 9,400 vertical foot day (in 13.5 hours, no less)? And then a one-mile bike ride back in the dark—a ride that’s exasperatingly more uphill getting back to the car. Yeah, I said it was “flat” but I white lied. It’s an up and down and up and down kind of flat...kind of like this trip report.

I was able to call my friend at the mercantile by Lake Wenatchee. I would be an hour later than expected but all was well. And therefore all was well with the day: a first ascent, good exercise, and a return with all boots intact and in fact strapped to my feet.

Sock it to ya, Julian!

* First ascent naming rights: Ein Gedi (variant spelling Engadi) is the name of the wilderness to which David fled from King Saul. The process of peak naming is a complex one so Dr. John Roper, Julian Simon, and I formed a three-man think tank back in early June to come up with a name for our objective. Since Pk 5913 lies on the opposite side of Mt. David from Mt. Saul, if David were to flee from Saul he would escape toward Pk 5913. And hence this hitherto unnamed peak now had its esoteric name (using the even more obscure variant spelling) that is sure to confound peakbaggers to come many years from now, perhaps the second ascensionists who may not visit this peak for 10 years or more. It would be interesting to see just how long the wait would be.

...was good way back when. Part II is good today! Part III?--is that when you re-summit to see if anyone else has Engadi-ed?

"the shortest point between two sides of a brush bash is always a long, curvy line." = Great Stuff (I wish I'd said that)!