Three Friends on a Finger

A Reunion of Sorts

As soon as I found out that I would be relocating to Idaho I began trolling for some alpine routes to climb. I had made a few trips to City of Rock and had heard about the climbing on Elephant's Perch, but that was about it. After seeing pictures of the Finger of Fate I had a "must climb that" moment.  I connected with a couple college buddies and we made our plans.

We arrived in Stanley on a July evening just before dusk. Everyone had ear to ear grins as we shook hands and shuffled into Sawtooth Luce's. After some good grub and even better stories we headed for the Hell Roaring Lake trailhead. The 4x4 road leading up to the trailhead was bumpy as hell! In fact on the way out we were passed by a trail runner who was traveling faster than we were in Aaron's truck! After some decent sleep we hit the trail just before 7:00am. 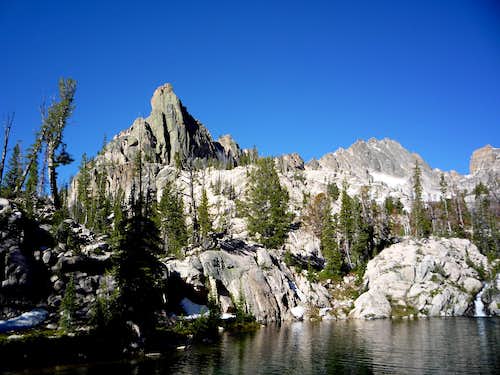 As we hiked we swapped stories and had some laughs. We arrived at Hell Roaring Lake and got a glimpse of the Finger for the first time. It looked like an old nail that had been driven from below. We slapped our packs on and resumed the hike. Suddenly we heard a screeching sound. Initially it sounded a lot like a bird. Aaron excitedly called us ahead. Brandon and I ran to the edge of a clearing below a boulder field. The screeching was in fact made by a fawn mule deer being pursued by a hungry coyote. Upon spotting us the coyote reversed course and headed back uphill. Did we save a fawn? Or ruin somebody's lunch? After tramping around the north side of the lake the well beaten path turns into more of a climbers trail. It switchbacks up into an alpine cirque with several small lakes and spectacular views. By 9:30 we were racking up.

The route of choice was the Open Book. This choice was by default as it was the only route I was able to obtain much information on. We elected to draw straws to determine the leading order. I won the first lead and shouldered the trad rack. My nerves were palpable as it had been a while since my last trad lead. I scrambled up the steep snow to the base of the Finger. The Open Book ascends a massive dihedral up that splits the eastern face of golden granite. The initial pitch starts with well featured moderate crack climbing. The climbing becomes more awkward before coming to the base of the true dihedral. From this point you ascend a beautiful hand crack which gradually widens to a tight offwidth. I thought this was one of the hardest sections of the route. Using my right side in I thrashed my way to the first belay. 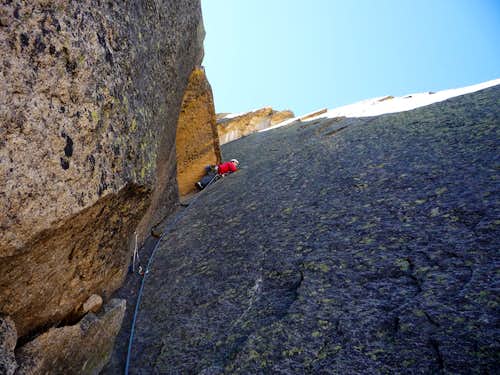 Aaron making the "cross over" move on the Second Pitch

Aaron was up next and tackled the wide crack and tricky cross over move of the second pitch. You would have never known that it had been over a year since he last roped up. The wide crack just above the belay is made much easier if one carefully uses the footholds found on the right side of the corner. Brandon grabbed the rope next and combined pitches three and four. This worked well so long as a directional piece is left for second climber. This put us at the base of the dual splitter. As Brandon got the "junk" leads of the 5.5 chimney and 4th class section we thought he had earned the lead on the fifth pitch splitters. This was a beautiful pitch and certainly the most aesthetic climbing on the route. It ends with 30 feet of runout slab which feels insecure but the moves remain moderate. 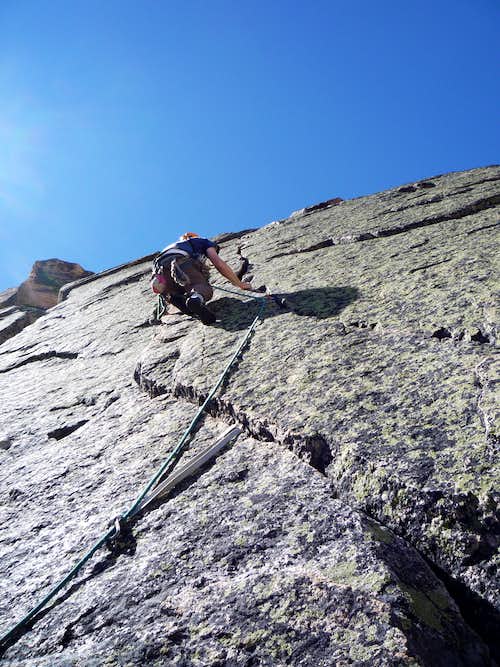 Brandon on the dual splitters of the 5th pitch.

The final pitch was one to remember. A few feet above the belay you come to the overhanging and featureless summit block. This house sized piece of rock is actually balanced on top of several other large boulders. You proceed to get on all fours; grovel you way under the block emerge on the north side. 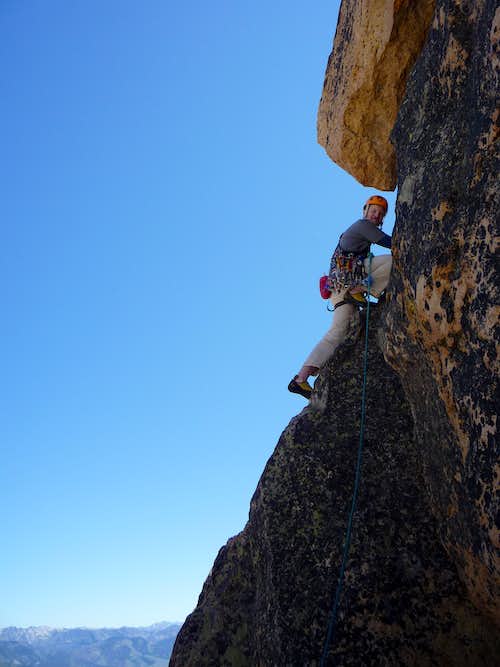 Getting ready to crawl under the summit block!

From hear the less-than-vertical final face to the summit comes into view. I took a deep breath and made the moves off the ledge. The last 20 feet are easy fifth class. 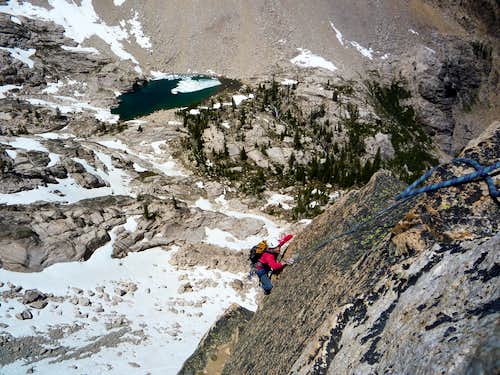 Aaron following the final pitch up the summit block. 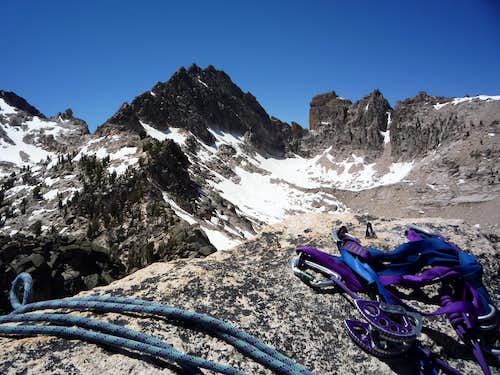 Summit views of Mt. Sevy (center) and the Arrowhead (left).

The summit sits on the crest of two alpine cirques and the views were superb. We nearly got our ropes stuck, but otherwise made it out without difficulty. We were back at the truck by 2:30 and I was home in Boise before dark. My first route in the Sawtooth's turned out to be one of the best alpine routes I have done to date. 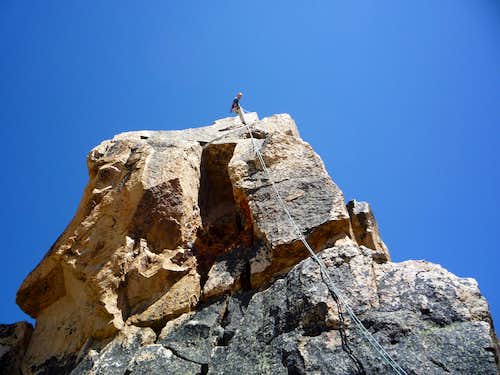 James rappin off the summit block.

I enjoyed your report, though I find rock climbing to be for the courageous people...like yourself.

I thought the first two pitches were solid 5.8, the rating was fair and I did not feel it was sandbagged. There was good gear during the harder sections. I did not find any pin or other protection on the last pitch. There are only 3-4 5.8 moves as you leave a ledge on the final pitch then the last 10-15 to the summit is easier.