Aetna (Αιτνα) is the name of a Sicilian nymph in both the Greek and Roman mythology. She was the goddess of the volcano, Mount Etna in Sicily. The place where it was believed Hephaestus and the Cyclops made the thunderbolts for Zeus. Mt. Aetna in Colorado takes its name from the same origins. And of the possible routes leading to its 13,745' summit, The Grand Couloir is perhaps one of Colorado's best known snow climbs.

When viewed from the south, basically Monarch Pass or from the top of Monarch Ski Area, Mt. Aetna and the Grand Couloir almost dominates the skyline with it's impresssive South Face. As snow tends to load and collect on western ridges and the leeward faces, the Grand Couloir 90% of the time will present with a snow-ladden western face and an equally dry or windblown eastern face. The couloirs center serves as a good demarcation.

People often climb Aetna and Mt. Taylor together ascending Aetna first and descending Taylor's gentle prominant south ridge. When ascending Aetna, one does have the choice of scrambling up its southwest ridge, climbing the couloir or scrambling the 3rd class south east ridge. And of these three routes, 'The Grand' receives the lions share of attempts. As prominant looking as it is from the south, from any other direction, Aetna blends into the surrounding mountains becoming almost indishinguable from mountains like: Taylor Mountain, Monumental Peak or Bald Mountain.

If you count the entire length of the couloir including the apron, you're looking at a climb of about 2,900' of elevation gain, sodon't expect a short climb. If you're more like me and count couloirs as starting above the apron (most of the time), expect a snow climb around 2,540', so again, not a quick day. But even so, this snow climb routinely ranks as one of Colorado's most well known and almost serves at times, as a kind of rite of passage. And with a paltry 2.5 mile approach, what's NOT to like about that?

Starting from Poncha Springs (By the way, while in Poncha, visit Elevation Brewery. They are amazing!), travel west for about 13.0 miles on hwy. 50. Just after the Monarch Lodge (left side), look for a small snowmobile shop/outfitter on the right after another .3 mile. It's hard to see from the highway, but the trailhead is just behind the snowmobile shop. Turn into the small dirt parking lot (right side) and continue through to a larger turn-around just past. There is a tree on the right side with a sign stating this is the trailhead/parking area for Boss Lake. Park here and start your walk up the road (FSR 230).

FSR 230: The actual approach to the Grand Couloir is a simple walk along Forest Service Road 230, a 4WD road (basically). The approach is only 2.5 miles. As you're walking, you'll come to the ACTUAL Boss Lake Trailhead on the left after 1.5 miles. It IS possible to drive to this trailhead as there is ample parking lower down near the creek, some good camping spots too. And even though the road is what I could consider an easy 4WD road, it is still a 4WD road. There are multiple spots where the jutting rocks would make life difficult for a Subaru or passanger car.

After another 1.1 mile past the Boss Lake Trailhead, the road will slightly bulge out to the left in a gentle arc. It is here you can look up the apron into the couloir all the way to the summit. The viewsw are magnificent. Your climb starts now.

The Grand Couloir is a 2540' snow climb, 2900' if you include the apron. This is rated easy and class-I. The average pitch of this couloir is 35°. That inclination is based off of three separate readings: the bottom, a slight bulge in the center and near the top. The Grand is typically considered a beginner snow climb much like The Angel of Shavano (Mt. Shavano) or The Cristo Couloir on Quandary Peak.

Start at the bottom of the apron and hike across the talus (or snow if you're lucky) due north into the couloir. The far left side of the apron actually holds more snow than the much flatter right side. Past this, the apron takes a slight/gentle turn left into the beginning of the couloir. From here, it becomes evident at how mellow the couloir actually is. The easiest path is to stay dead center and follow 3/4 the way up. The farther left one climbs, the slope is steeper with more side-hilling. But there will generally be better snow.

About half-way up the couloir, there is a series of small rocky protusions and a mellow rocky crest. This provides a great spot to rest. The pitch will steepen after this point. You can also take a good look up the couloir at three possible routes to the summit. Staying dead center will lead you directly to the summit (directissma). The other two left leanings gullies end on the Southwest Ridge. They are also slightly decreased in pitch, but not much.

Another thing to take note of, the southwest ridge (climbers left) does tend to cornice. But considering the lip of said ridge is more of a gentle roll, the cornice that forms doesn't build up. So note that it's there, but it won't be as big as it may look from within the couloir.

A second thing to take heed of, is with the southern vantage this couloir has and that it's so wide open, the snow bakes early on and continues to soften up all day. So starting early is a good idea. 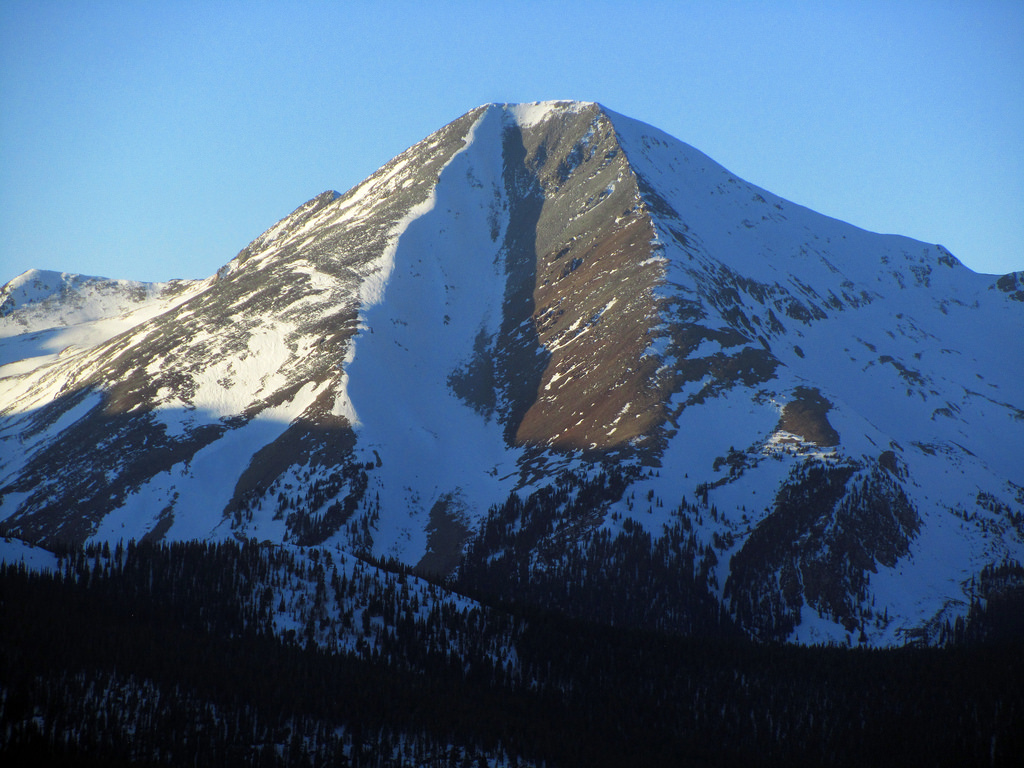