The "Mountains" of Florida

The “Mountains” of Florida

Clearly, Floridians live by a Flat-Earth creed, for they’ll assign lofty monikers to their highest hills. There are four named “mountains” in Florida, or so says this Wikipedia page. But, let’s be clear, these barely qualify as “hills.”

This is a report for the highest two above. I haven’t yet visited the bottom two. Boy if that was ever a reason to return all the way across the country, I don’t know what it is. My boy can go to Disney World. I’ll go visit Sandy and Sand. Or not.

Iron and Sugarloaf mountains were completed by me in mid-February 2012 during a visit to Orlando ostensibly to introduce my two-year-old to sprawling theme parks.

Spook Hill is one of those so-called magnetic hills. Since I had never seen one in person and it was close enough to Orlando, I figured wife Michelle and I would pay it a visit after an airboat ride in the vicinity. After missing the turnpike exit for the airboat ride (oops, I guess we won’t be doing an airboat ride since the next exit is 30 miles down the freeway), we made our way clockwise around Lake Kissimmee to the town of Lake Wales where our “spooky” hill awaits. My iPhone GPS zeroed us in to the vicinity and then the street signs pointing to the landmark took over from there. And there it was, just past Spook Hill Elementary: a one-way road going up an obvious acclivity and a big sign proclaiming this particular road’s mysteriousness. There was a group of women standing along side the road while one of their friends took the car up to the starting point where it commenced rolling back toward the women (and us as we waited our turn). And then it was our turn.

We drove up to the white line and put the car in neutral. Ooookaaaay. So we’re rolling backward. This is dumb, because to me we were clearly rolling downhill. This particular “road-top” attraction has got to be one of the silliest wastes of time I’ve visited. The part of the road that is used for this no-thrill ride runs through a subtle dip in the road and that’s where the rolling takes place. I had thought (or hoped) that the rolling at such an attraction would go “up” a long hill appearing ahead of the car.

So after visiting Iron Mountain (see below), we decided to return to Spook Hill just to see if we had missed something. This time a group of men were there with their pick-up truck. They took a truck and reversed its direction on the one-way road so they could roll forward in the car as opposed to backwards. These guys all wondered what the big deal was. Then it was our turn again and we also reversed it to roll forward. When we got up to them we exchanged niceties (they were from Kentucky) and laughed about this landmark, which we renamed “Spookid Hill.”

There is also a magnetic hill in Washington over by Yakima. I’ll have to check that one out when I’m next over that way. 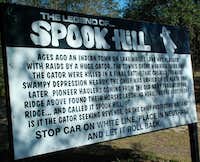 Iron Mountain is a couple of miles north of Spook Hill. While the latter is merely a skid mark on the road of life, Iron Mountain, coupled with Bok Tower residing on its summit, is a welcome oasis in this drier landform region of Central Florida.

Notable journalist Edward Bok wintered at Lake Wales in the early 20th Century. He had the garden, bird sanctuary, and tower built in the 1920s on what was then an arid hilltop. The 205-ft tower is a great piece of architecture. It was apparently built on the highest point of the hill but the ground is so flat up there, not to mention regarded to some degree to form the gardens, that it doesn’t noticeably reside on the highest point. The place has been designated a historic landmark (Reference)

It has been said that the tower, combined with the height of the hill, makes the top of the tower the highest point in Florida at approximately 500 ft.

One other comment is in the museum a display claims that Iron Mountain is the highest point in Peninsular Florida. This is not exactly true. It is the highest named where a) Sugarloaf Mountain WNW of Orlando is higher by about 20 ft, and b) there is an unnamed 300+ ft hill top eight miles south of Iron Mountain, east of Crooked Lake that is higher and is the Polk County Highpoint.

Wife Michelle and I ambled the park grounds (the fee is about $12 per person to enter the park) and enjoyed looking at all of the plant species—including the oaks with their draperies of moss. I looked for the benchmark (287) just west of the tower but could not locate it near an access road for a house.
The entrance to the park goes past orange groves. It would not be hard to purloin an orange with an errant grasping hand…if you were to find yourself outside of the car for some reason. There is also a trail that winds its way through the grove, which would allow for even easier cleptic actions. 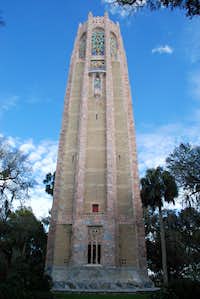 I also climbed Mt. Everest on this trip. Well, the Mt. Everest at Disney World’s Animal Kingdom. Well, it was a roller coaster. The coaster stops just below the summit where a Yeti has torn up the tracks. So I guess I didn’t summit Everest after all.

Three days later I found myself with a couple of hours of free time so took the time to drive the 30+ miles out to Sugarloaf Mountain from our resort condo. I had the various reports on www.cohp.org to guide the way. It’s not really hard to get there, just be sure to take the correct exit off the turnpike if you’re using it.

I visited the northern summit candidate first. This is the summit with the radio tower on the top a few dozen yards off Sugarloaf Mountain Road (now there’s an expected name for this road!). I parked at the tower’s fence gate and walked the perimeter and even out in the weeds west of the tower where the purported “highest point of land” is at. Not much to see here. My iPhone GPS indicated the Howey Benchmark was inside the fenced-in lot of the house next door. So I walked the west edge of that lot to try to see the benchmark but I could not see it.

Next up was the southern candidate. I took Citrus Grove Road off of Hwy 27 and then took Turkey Farm Road (dirt road). I saw the knoll across the fence on the drive by. So I turned around and parked opposite the knoll. Various reports over the years on cohp.org speak of the fence being in various states of repair, from being completely down to having a gap in it to being in good condition. It was in the last of these conditions when I was there. In fact, it looks only a couple of years old. But, no matter, I easily stepped through it and walked up the brushy slope to the top. The views from this summit are better than the northern summit candidate.

As I was leaving (in a slight hurry since this is probably private property; I did see one No Trespassing sign on the fence farther down the road) I spotted a rusty tin can lodged in the crook of a tree. I decided to investigate. Could it be a register? I dislodged the can and forced it open (a soda can inserted inside a tin can). A peppering of tiny red ants fell out. I figured these were biting ants so was diligent about keeping them off of me. Sure enough, it was a register. I unfolded the paper inside and, who should it be but that prominencian Andy Martin? I really wasn’t surprised. His entry was from July 2008. Unfortunately there was no pencil in the register and I didn’t have one with me.

Why was Andy there?
Sugarloaf Mountain is considered to be the most prominent point in Florida with 245 ft of clean prominence (reference).

Both the prominence status and the isolation status were compelling reasons for me to visit this summit.

I was not so much interested in the fact that it is also the Lake County Highpoint. 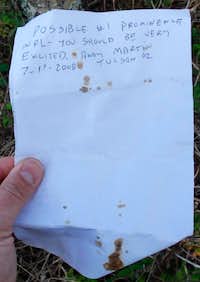 Here’s what I found kind of comical:
While in Florida, the highest elevation I got to was about 315 feet. After flying home, while waiting for our ride to show up at curbside, I spotted a benchmark underneath the third Skybridge. I read the benchmark. It’s got 372 ft stamped on it. I had just landed in Washington and I was already higher than all of Florida! 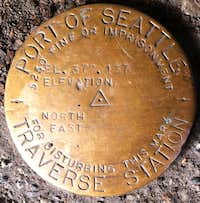 Hey John, Iron Mountain and Sugarloaf Mountain are also Quad Highpoints. I just thought you’d like to know. Once you get Washington done, you can move over to Florida.

OMG! that THAT is

quite the coincidence. While you were summiting those lofty heights I was also in FL on the 2nd to 6th of Feb wondering how to get some excercise in Flatland. I was on Marco Island, south of Ft. Meyers for meetings. I think I got more vertical just climbing the stairs in the hotel than most floridians get in a lifetime!

Enjoyed your comedic adventures looking for elevation in Florida!

I think it's the lack of true mountains in that state (and some others in the south and midwest) that keep me from ever seriously considering high pointing. But I got some good laughs from your article!

Oh, I also did all the Disney mountains when I was there in December: Space, Big Thunder, Splash, and Everest!

Thanks for details on Florida's finest!

Re: Enjoyed your comedic adventures looking for elevation in Florida!

Everest? How did I miss that one when I was there. Perhaps going up Space Mtn, Big Thunder and Splash several times would make up for the oversight but I did take a tram that went right through the Matterhorn. That should count for something. : )

Re: Enjoyed your comedic adventures looking for elevation in Florida!

Hey Dean, you must not have been to Disney World in a while. The Matterhorn is now gone. It is being replaced by "Fantasy Land."

The loss of Matterhorn at Magic Kingdom was made up for by the addition of Everest Expedition at Animal Kingdom.

Those fake mountains are steeper than any of the real mountains in Florida. The whole time I was there I never saw a real cliff.

Just a quick reminder of why I lived in Washington State. I wouldn't mind one of those theme parks up here though. Glad you and the family made the most of it. :)

Q: Why climb a Florida mountain?

A: Because it's not there.

Thanks for the report! This made me smile, and I think this should remind us all that we shouldn't always take climbing so seriously :)

...the only "mountains" that I lusted after were C, D, and Double-D mountains!

Well done. I drove and biked through this area back during my Florida days. Never realized there were named points of prominence. Also, there is a reasonably hilly rolling area to the west near Brooksville where the Croom Trail Races (50 mile and 50K) are held twice per year.

Thanks for something a bit different!

An amusing account of your antics in Florida - I'd no idea it was so flat! Someone should do the same in the UK for a county called Lincolnshire, much of which is fenland and may even be below sealevel.

This report is a welcomed relief from all the DRAMA going down
on SP's forum pages these days.

Looking forward to hill repeats here, now i know where to park.. Thanks for the write up!