Lennox Mountain has been taunting me from afar since I first laid eyes on its rolling snowy slopes from somewhere within the Alpine Lakes Wilderness. I had hoped to continue on to Lennox after climbing Cleveland Mountain, and then from Canoe Peak but each time the summit seemed just out of reach. After conceding that this one would deserve the dedication of a full day, I began to look for the perfect snow conditions and weather forecast. With a Sunday that would live up to it's name and the lowest predicted avalanche danger in weeks I was confident that the third time would be the charm. 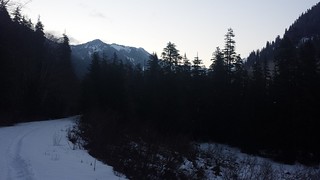 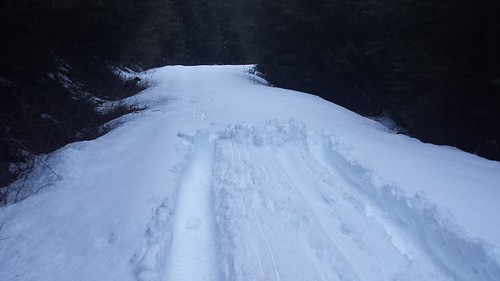 Lennox Mountain is ideally climbed (from the south, at least) with enough snow to ease travel through the thick brush which covers the forest floor for the first 1000' or so above the road. I was a bit surprised to find snow on road 5730 about 3 miles from the end. Some jeep ruts helped to get me and my crappy tires another half mile, and I was off with Maverick in tow by 6:30 am. The jeep tracks stopped just past Spur Road 113 where snowshoes instantly became necessary. McClain Peak and Mount Phelps lit up in alpenglow behind us, and what could only be Lennox Mountain briefly appeared ahead, though it looked oddly tame from this angle. 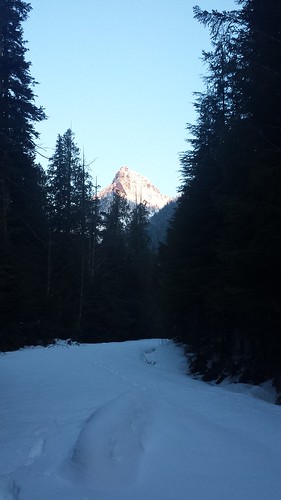 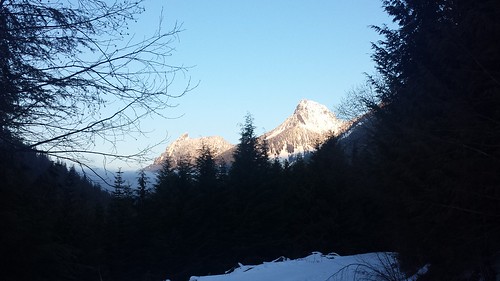 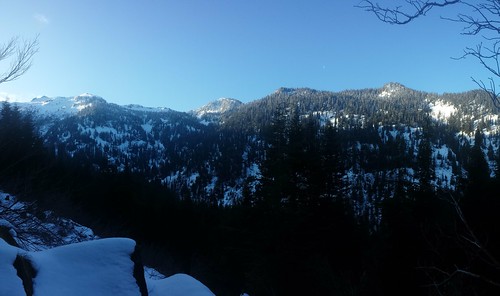 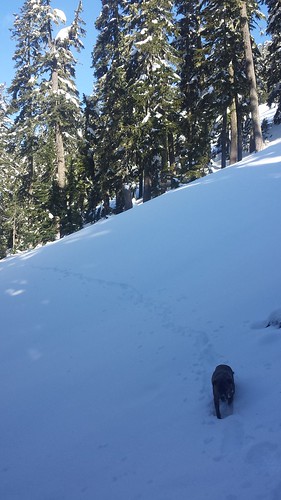 We left the road around 2600' in order to gain some elevation before crossing the next creek. While I thought at first we may have gone higher than required, we happened to cross just above the start of a deep, wide trench in the snow. I had hoped for a more consolidated snow pack but by 10 am the sun really began to bake the surface and each deep step brought with it a mound of slush caked onto my snowshoes. In a few steep sections I was forced to make painfully mellow switchbacks so that Maverick could get somewhere with his efforts. 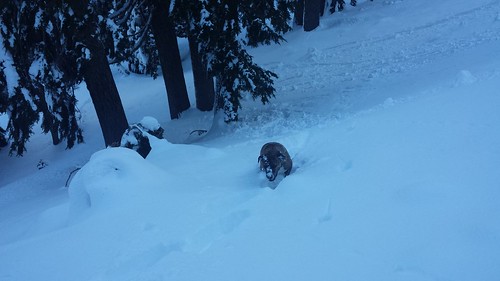 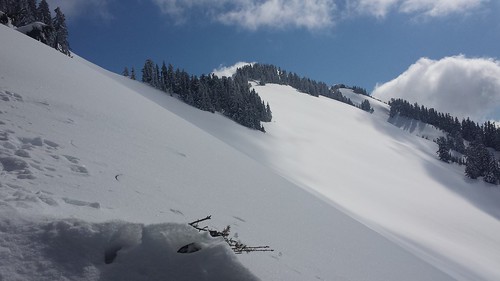 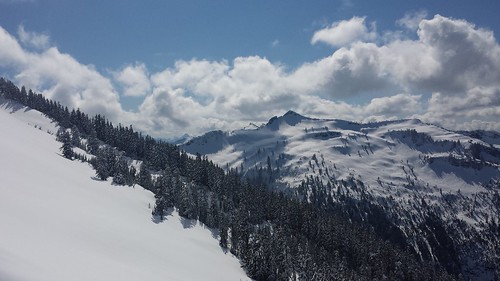 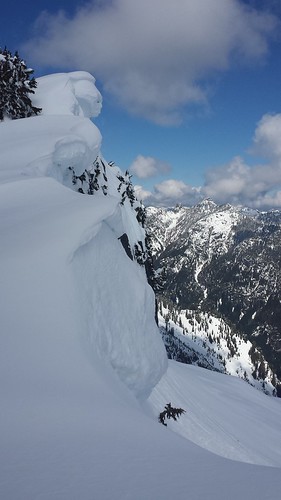 When we reached the sharp SW ridge our surface travel was slightly eased by past snow bombs from above. We finally glimpsed the summit at 11:30 across a huge open snowfield. At last confident that we would reach the top, we took a long break in the sunshine to prepare for the final push. We played it safe and stayed near the tree line while maintaining a safe distance from massive overhanging cornice on the North side of the ridge. Clouds began to move in from all directions, shrouding Index and surrounding peaks where I knew Colin and some friends from the Tacoma Mountaineers were enjoying Lake Serene. As the terrain became more open and exposed, surface conditions improved, making the final few hundred feet some of the easiest travel all day. 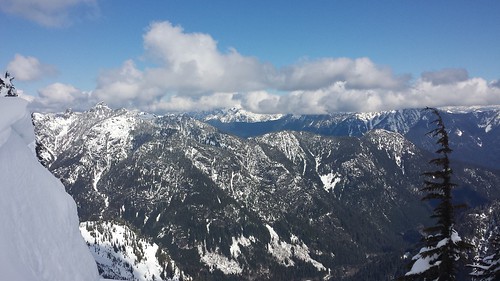 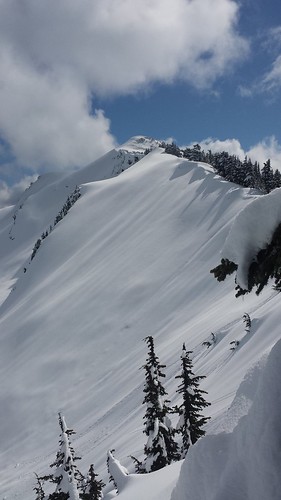 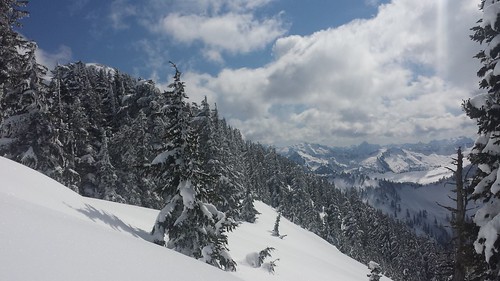 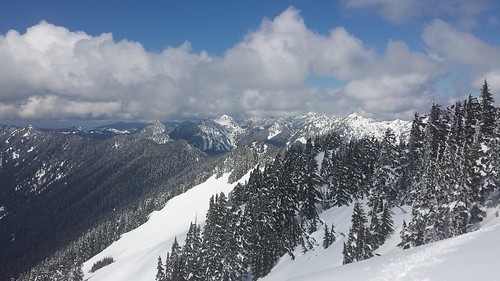 Views from the top were glorious! The 2000'+ of prominence could not be ignored with deep river basins stretching out in all directions. Coney Lake was nearly indiscernible under mounds of pillowy snow. We had reached the summit less than 15 minutes before a firm turn-around time of 2 pm. Although I brought a shovel for the purpose, I had no desire to begin digging for a register. We were both beat - Maverick was practically falling asleep sitting up and my hips were really feeling 3000' of breaking trail. 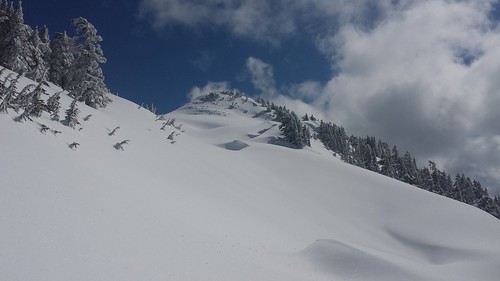 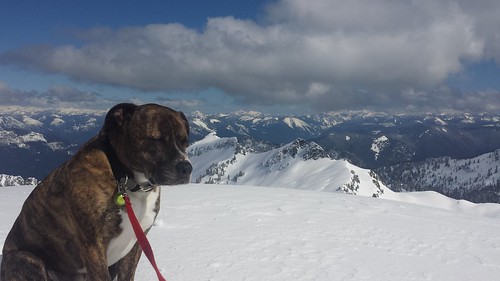 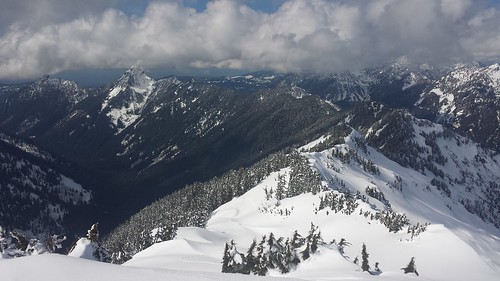 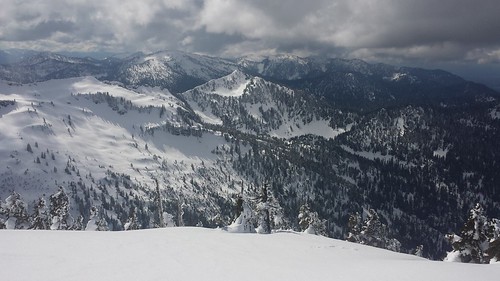 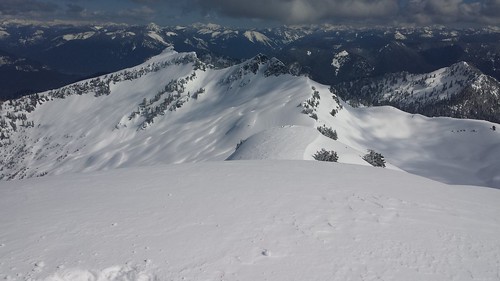 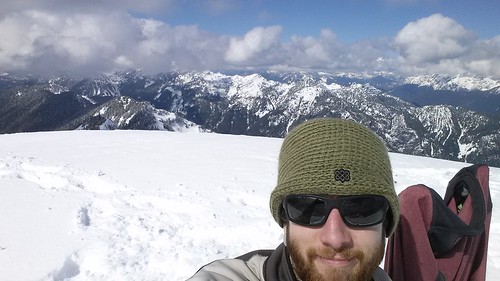 Th soft snow that had made for a 7 1/2 hour ascent allowed for an easy return in just over 2 hours. On our way out the road was busy with jeeps and firearm enthusiasts. The small mud slide seemed even smaller in the daylight, I doubt it would even stop a passenger car. I noticed a half dozen bullet-riddled televisions littered on the roadside just outside the National Forest boundary. Classy. 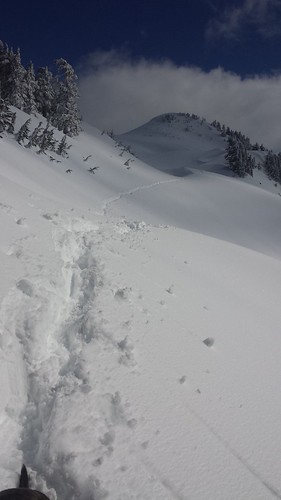 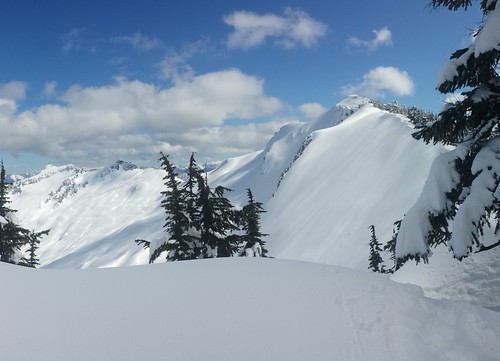 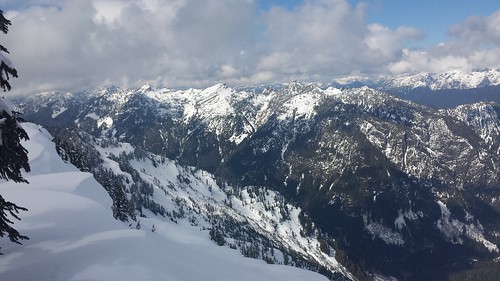 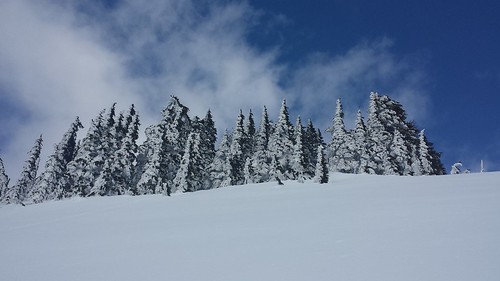 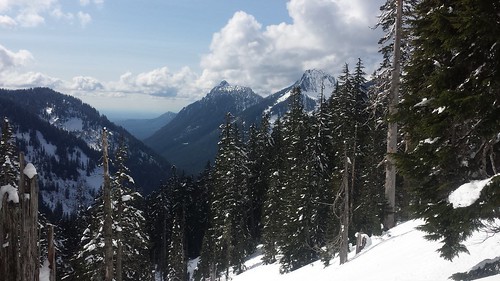 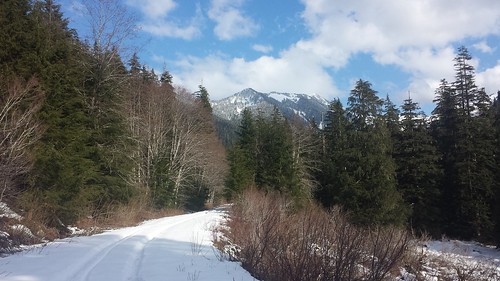 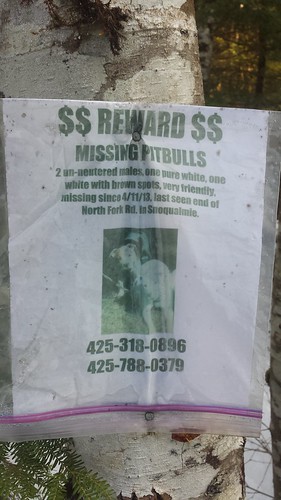 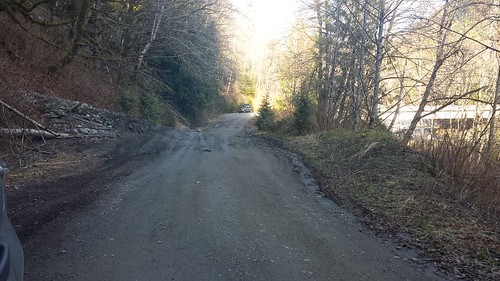 Nice trip and always spectacular photos! Thanks for sharing

What a grand adventure!

Thanks for the info. and great pictures

7:30 hours up sounds like a total ball buster. What's your best guess for how long it would take to climb Lennox in more consolidated snow conditions of June?

That sounds like an epic day.
I'm glad your perseverance paid off.
That is a very worthy summit destination, especially considering its great views of the Alpine Lakes Wilderness interior.